The debate will cover six topics, as voters watch how two men they already know well will stand up for themselves, and their claims, amidst each other's attacks. 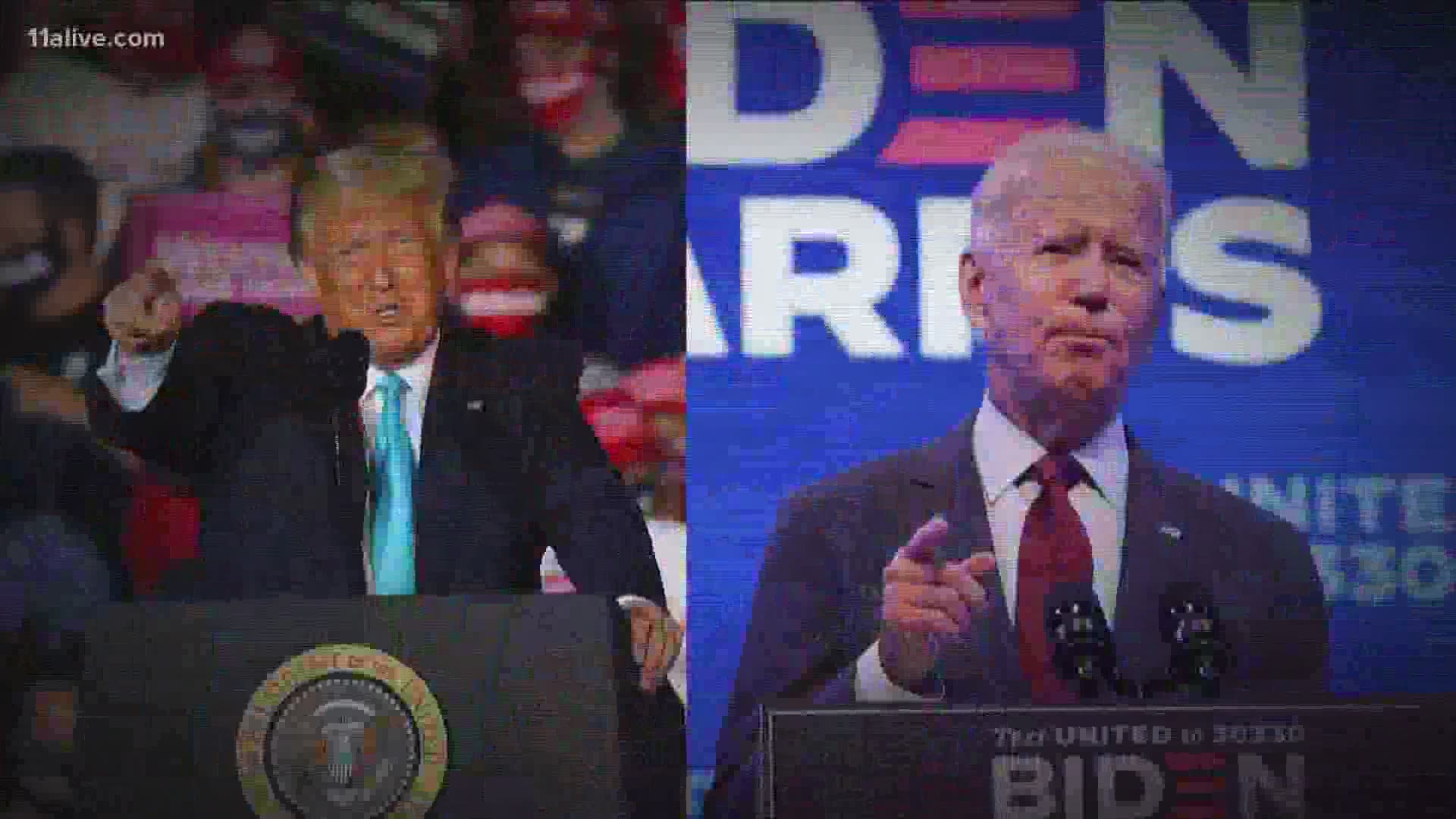 ATLANTA — Tuesday night, President Donald Trump and former Vice President Joe Biden will go head-to-head in their first debate against each other.

And the face-off, televised from Cleveland and scheduled to last 90 minutes, beginning at 9 p.m., will likely display the sharp, clear contrasts between Trump and Biden in the final weeks of the presidential campaign.

The debate will cover six topics, 15 minutes per topic, and not necessarily in this order: the Trump and Biden records, the U.S. Supreme Court, the COVID-19 pandemic, the economy, race and violence in cities, and election integrity.

Millions of people will likely be watching how the two men stand up for themselves and confront each other - live.

Among the debate's viewers will be Atlanta Businessman Milt Thomas, who supports Trump. Thomas hopes viewers will see how Trump is “a tough New York City street fighter,” as Thomas put it.

“It won’t be rope-a-dope,” Thomas said Monday, saying he is sure Trump “is going to go after Biden.”

And Thomas thinks viewers who might only know Trump through the news media will decide that they like, Thomas said, who Trump really is, and isn’t.

“If he were an angel, the left would treat him the same way,” Thomas said. “I hope what he can do is dispel some of the notions that he has horns and a tail.”

And Thomas believes Trump will be at his best during the debate, “because he’s been under the gun so much almost daily with the different reporters and interviews. He’s probably had as much practice as anyone needs in his position, right now.”

Biden supporter Jackson Faw of Atlanta calls himself “a recovering Republican” beginning with Trump’s election four years ago, and expects Biden will easily dispel recent attacks that he, Biden, is mentally unstable.

“He’s all there,” Faw said of Biden, “he is tough. He’s compassionate. He cares. And he’s certainly in a much more stable state, emotionally, than our president.”

And the records of the two men?

“Donald Trump inherited a rising economy, whereas President Obama and Vice President Biden inherited The Great Recession,” Faw said. “I hope that that gets to come out.”

Danielle Alvarez, who is with the Trump campaign in the South, thinks the debate will showcase one success and one failure, and that it’s Biden who is the failure.

Not so fast, said Atlanta’s Gloria Moore, a Biden supporter, who can’t wait, she said, for the debate to show America how Biden fights.

“Trump has, unfortunately for himself, set a very low bar for Joe Biden to perform,” Moore said. “So, I expect that Joe Biden will be cool and calm, focus on the issues, talk to the voters, and he will get his points across very effectively.... He says all the right things and checks all the right boxes when it comes to civil rights, and women’s rights, and when it comes to racism. Joe Biden is not afraid to say ‘Black Lives Matter.’”

Faw said he is looking forward to Biden connecting Trump’s Supreme Court nominee to attempts at overturning key parts of “Obama Care,” such as coverage for people who have pre-existing conditions, if the nominee is confirmed by the Senate.

“I think that’s what’s at stake,” Faw said. “The health care of 20 million Americans. And one of them is me.”

There is one point of agreement: they expect the debate will clearly show voters, who think they know each candidate, who each candidate is.