Among other topics, immigration and the HOPE Scholarship became contentious issues during the debate. 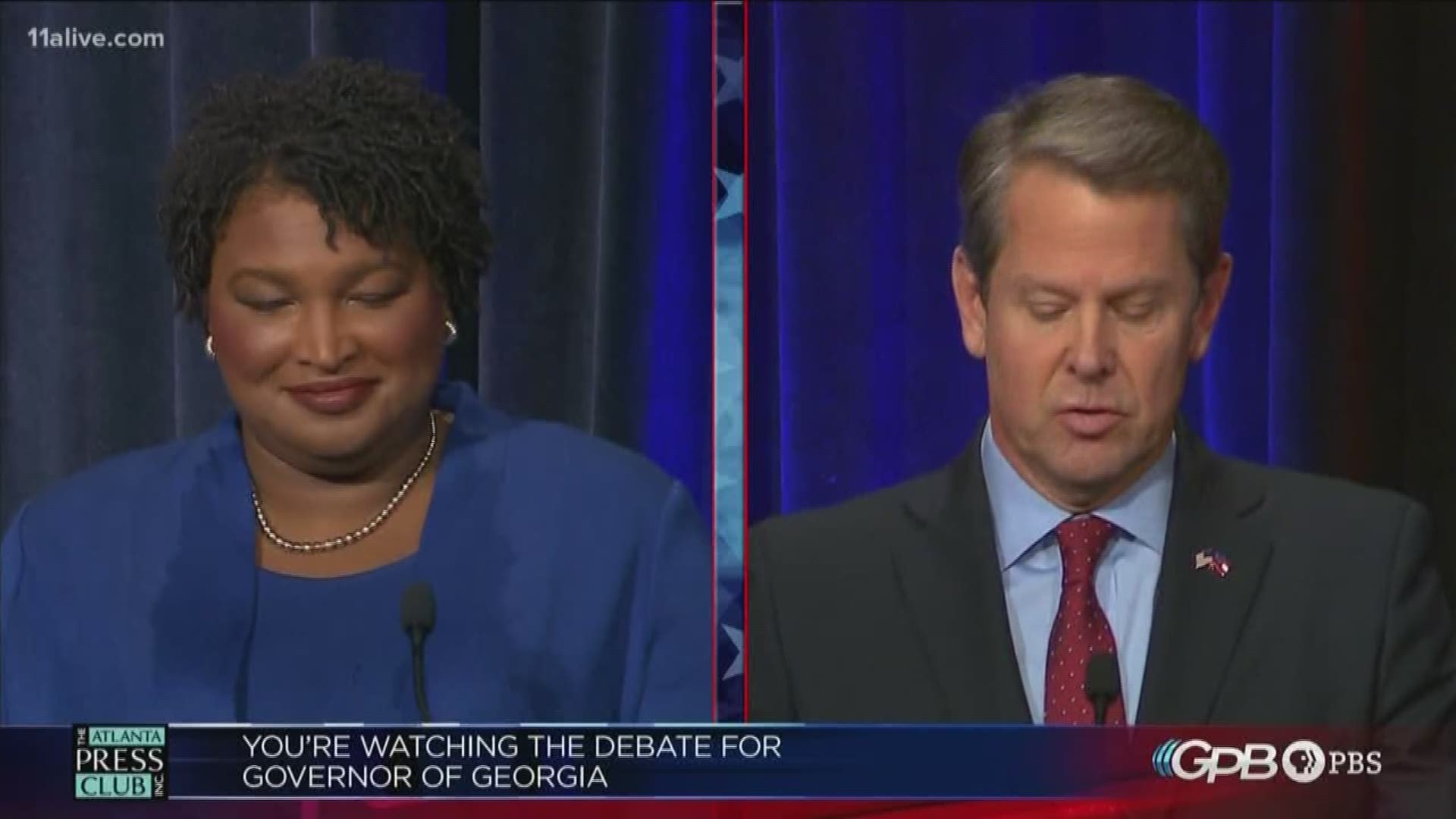 ATLANTA -- Explosive accusations highlighted the night as the candidates for Georgia's next governor squared off Tuesday night in their first debate.

Among the biggest talkers of the night was a photo uncovered just hours earlier from 1992 showing Stacey Abrams with a group of protesters burning the 1956 Georgia flag. Abrams is not shown burning the flag, but she is in the photo.

A secret recording of Brian Kemp has also emerged where he expressed his concerns about early voting. No one asked Kemp about the recording. 11Alive's Elwyn Lopez did ask Abrams about the protest.

"Twenty-six years ago -- as a college freshman -- I, along with many other Georgians, including the governor of Georgia (Nathan Deal), were deeply disturbed by the racial divisiveness that was embedded in the state flag with that Confederate symbol," Abrams said.

Another hot topic was voters on the rolls. Groups have accused Kemp of purging more than 50,000 voters from the rolls as a method of voter suppression. Kemp said he is just following the law. In fact, he points to an increase in voter registration as proof.

"We have more voters on the rolls than when I took office," he said. "I created the process for overseas and military ballots to be delivered electronically."

"Under Secretary Kemp, more people have lost the right to vote in the state of Georgia," Abrams said. "They've been purged, they've been suppressed and they've been scared."

Immigration and the HOPE Scholarship have become a contentious topic as well. Abrams believes in providing opportunities to students who were brought here by their parents. Kemp has used that position as one of his most common attacks.

"Unlike Miss Abrams, who wants to give the HOPE Scholarship and free tuition to people who are here illegally, I think that is the wrong position to go," Kemp said. "I think we need to continue to fight for our own people who are citizens of this state."

The finances of both candidates were a constant issue. Abrams racked up thousands in deferred taxes. Kemp has had business deals come into question.

"And he owes half a million dollars to a friend that he conveniently forgets he owes," Abrams said.

"I'll tell you what's more concerning, is Miss Abrams being a tax attorney and not paying her taxes," Kemp said.

Libertarian candidate Ted Metz also took part in the debate hoping to convince voters that are sick of both parties.

With a race that is this tight, any momentum that a third party candidate picks up can cause serious problems for either Abrams or Kemp.

Wednesday morning, President Donald Trump tweeted his support for Brian Kemp, and denounced Stacey Abrams, echoing a sentiment that he has tweeted in the past.

Brian Kemp will be a GREAT Governor of Georgia. Stacey Abrams will destroy the State. Sooooo important, get out and VOTE for Brian!

Though Trump has tweeted in support of Kemp's campaign, he has not come to Georgia in support of the Republican nominee. He visited the state recently to survey areas devastated by Hurricane Michael, but did not make any campaign appearances while here.