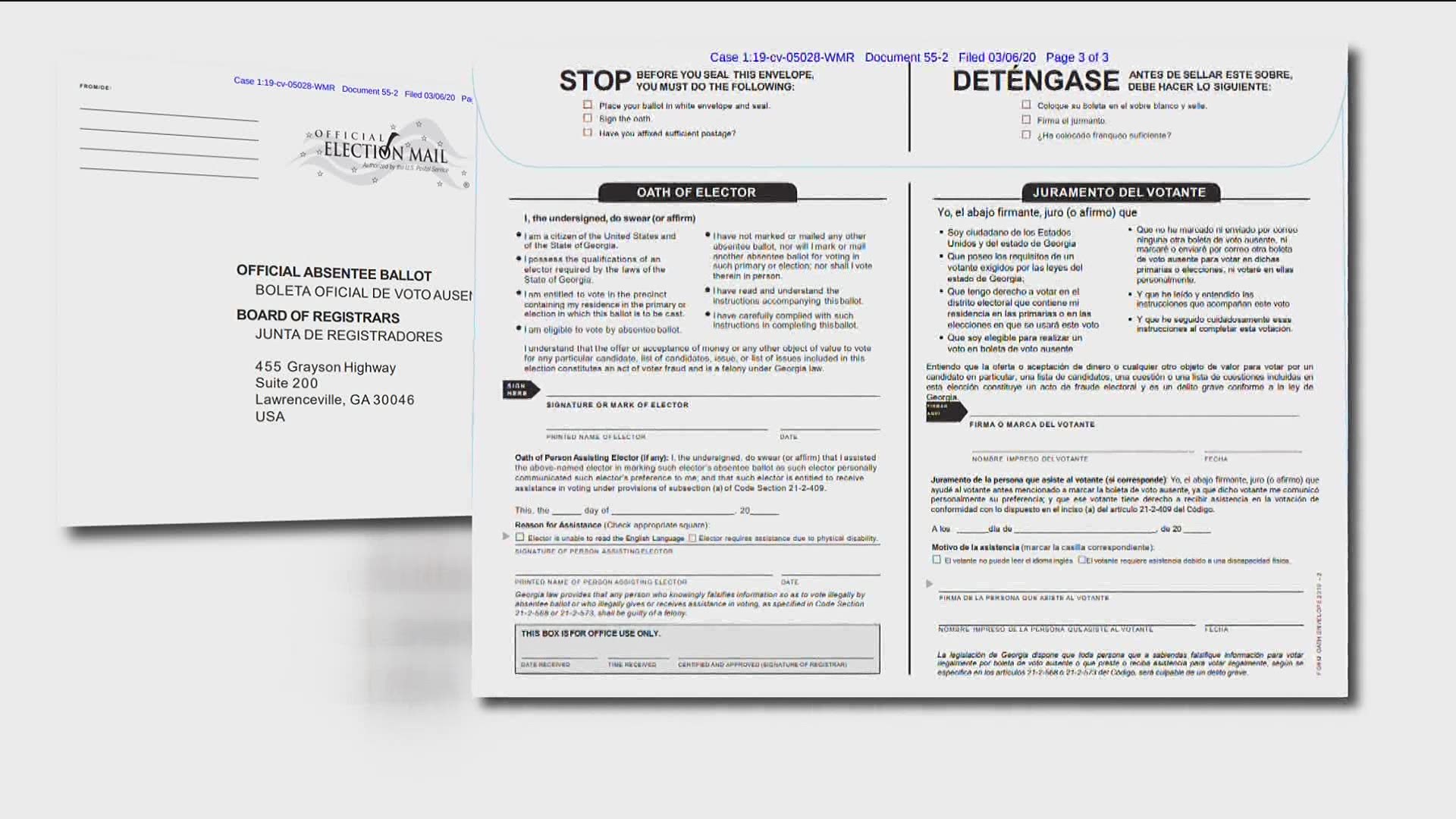 GWINNETT COUNTY, Ga. — 11Alive is looking into a report of absentee ballot delays for at least one couple who said they hadn't seen them show up as quickly as past years.

Jon Saulson of Gwinnett County said he usually votes absentee along with his wife.

"Number of weeks ago we both went online, filled out the forms through the Gwinnett Election Board," he said of requesting absentee ballots for the Nov. 3 election.

Saulson said, in the past, their ballots have shown up quickly. So, when his mailbox was empty he called the election board last week. He remembers an election worker telling him his ballot should arrive within the week.

On Friday morning more than a week had passed and he was still waiting for ballots to arrive for him and his wife. So, Saulson called the county again.

"What is the delay?" Saulson said he asked. "Is it the postal service or what? She says, 'No it is being routed through a third-party,' and that was New York."

It turns out that's true, but the reasoning is a little complicated. In Gwinnett County, the Voting Rights Act requires ballot materials to be printed in both English and Spanish because more than five percent of the county's voters speak Spanish as either a first or only language.

In 2019, the Democratic Party of Georgia filed a lawsuit over the absentee ballot envelope the county used in the 2018 general election.

The oath on the envelope voters must sign before returning their ballot was printed in both languages in a 6.5 point font.

The Democratic Party, in its lawsuit, described the text on the envelope as hard-to-read and cramped. And in the 2018 general election Gwinnett, the lawsuit said the county "rejected more absentee ballots for missing or mismatched signatures than any other county" in Georgia.

Court filings show a settlement led to a new absentee ballot envelope design. But a Gwinnett County spokesman said the new design led to the need for a different vendor than other metro counties are using.

"The volume and envelope size were factors," Gwinnett County spokesman Joe Sorenson said in an e-mail. "The State’s vendor used in June, Runbeck, is in Arizona. Runbeck could not handle Gwinnett’s envelope size for the November election. Runbeck is handling the printing and mailing of most of the other metro Atlanta counties."

Gwinnett is using a vendor in New York by the name of Fort Orange Press.

Sorenson said the vendor needed to create a unique envelope since the one now being used is not a "stock size," but he added Gwinnett absentee ballots are now heading to voters who have requested a ballot.

"A majority of ballots are being mailed today with the remainder being mailed on Saturday and Monday, so voters will have plenty of time vote and return their ballots once they are received," he wrote. "Additional ballot requests continue to be processed daily and there is not a backlog of application requests to be processed."

The concerns in Gwinnett come as a record number of voters are expected to vote by absentee mail for the November election.

State numbers show 207,716 voters cast an absentee ballot for President of the United States during the 2016 election.

Statewide, 1.2 million voters have already requested an absentee ballot for this year's election, according to the Georgia Secretary of State's Office. The state estimates up 1.7 million people could end up casting absentee ballots.

For voters statewide, the Secretary of State's Office is now providing an efficient way for voters to receive updates about their absentee ballots.

While voters can continue to use the state's My Voter Page to see updates online, they can now also sign-up to receive notifications through text, e-mail, or phone calls whenever there is an update about their absentee ballot.

The service is run by a Denver-based company called BallotTrax.

Voters can opt-in to the service through the BallotTrax website.

"It is a private-sector group, but we have received a grant to pay for it, so this is at no cost to Georgia taxpayers," Sterling said.

A spokesman for BallotTrax said that, so far, 12 states and 400 counties have signed-up to use the service ahead of the Nov. 3 election, but the service has been in use since 2009.

Voters will also receive a notice if an issue is stopping their absentee ballot from being counted.

"It will give you the e-mail and the phone number of your particular county office to call and find out how to cure that absentee ballot so your vote will count in November," Sterling said.