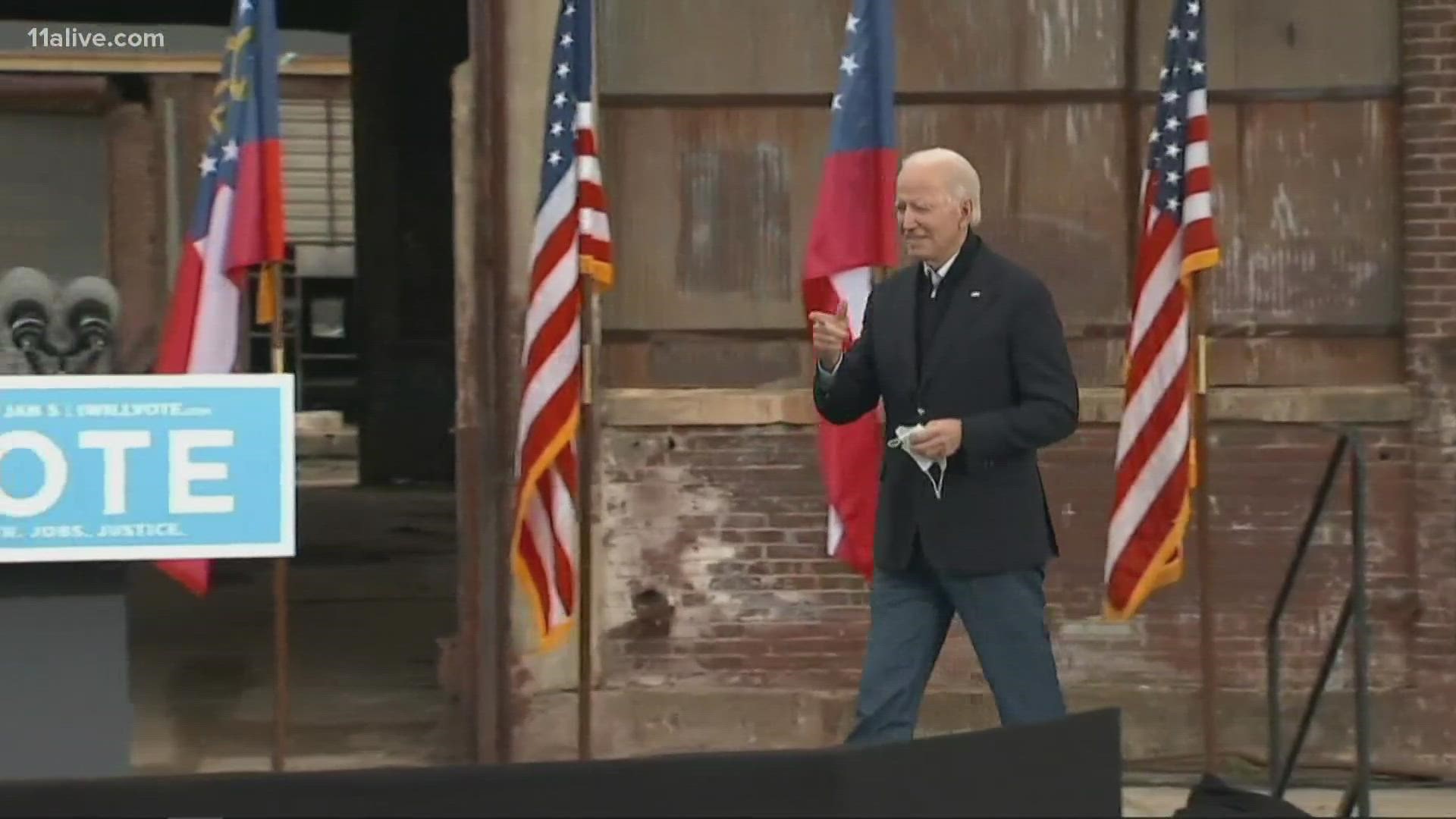 ATLANTA — President-elect Joe Biden thanked Georgia voters for delivering him the state in last month’s election and asked them to follow up by electing Democratic Senate candidates Jon Ossoff and Raphael Warnock.

Biden traveled to Atlanta for a post-election rally Tuesday to help the Democrats looking to knock off incumbent Republican Sens. Kelly Loeffler and David Perdue in Jan. 5 runoffs. It's the president-elect’s second foray outside the Wilmington, Delaware, area since last month’s election.

A day after the Electoral College affirmed his victory, Biden used his remarks to call for unity. But he also made the case that he badly needed “doers and not roadblocks" once he takes office next month.

If the Democrats win both Georgia runoffs, Biden would enter office with Democratic control of both chambers of Congress, giving him far more leverage to push his agenda.

Read the full remarks below. (Story continues below the gallery)

It’s great to be back!

Let’s hear it for Mayor Keisha Lance Bottoms, the best in the business. Had my back early in this whole deal.

Give it up for Congresswoman-elect Nikema Williams. I have no doubt John Lewis would be so proud.

I don’t think so.

Stacey — you’re a hero. Thank you.

And of course, honk for your next United States Senators — Jon Ossoff and Reverend Raphael Warnock.

Georgia — let me start with two simple words: Thank you.

Thank you for turning out in record numbers in the November election.

Thank you for the faith you have put in me and Vice President-Elect Harris.

I’m starting to feel like we won Georgia three times.

I have to say, it feels pretty good.

You know, I think you all just taught Donald Trump a lesson.

In this election Georgia wasn’t going to be bullied.

Georgia wasn’t going to be silenced.

And Georgia certainly wasn’t going to stand by and let Donald Trump or the state of Texas, or anyone else come in here and toss out your votes.

But you know who did stand by and do nothing while Trump and Texas and others were trying to wipe out every single one of the almost five million votes you all just cast in Georgia?

You might want to remember that come January 5th.

Now, I’ll try to be generous here in the spirit of the season.

Maybe your Senators were just confused.

Maybe they think they represent Texas.

Well if they want to do the bidding of Texas, they should be running there instead of here in Georgia.

Because you know what?

You’ve got a couple of folks running for U.S. Senate in this state who aren’t confused at all.

Jon Ossoff and Raphael Warnock are running to represent Georgia.

They’ll actually fight for you. Represent you. Stand up for you.

And they won’t put themselves first either.

They’ll work for you.

And there is no doubt in my mind – none – that if Texas or Donald Trump, or anyone else in the United States Congress tries to do anything except respect the will of the people of Georgia, they will move heaven and earth to stop them.

You know, you all did something extraordinary in November.

You voted in record numbers.

You voted to improve the lives of every Georgian.

And you voted as if your life depended on it.

Now you’ve got to do it again.

Because, yes, the lives of every Georgian still depend on what you do.

And, yes, you still need to vote as if your life depends on it.

You don’t have to wait until January 5th to vote.

You can vote starting now. Early vote has begun.

That’s one of the reasons I’m here.

Let me hear — how many folks here have already voted?

How many folks are going to vote today?

How many of you have a plan to vote — get a family member to vote, a friend, a neighbor, a co-worker?

Let me hear it.

Is Georgia going to break the record for voting in these Senate elections?

Now let me tell you something.

There are a lot of folks betting you won’t.

There are a lot of folks saying, well maybe Georgia broke the record for votes in the Presidential election but there’s no way they’ll do it again in a special election for two seats in the United States Senate.

Are you ready to prove them wrong?

I think you are.

I think Georgia is going to shock the nation with the number of people who vote by January 5th.

Am I right? Am I right Georgia?

We’ve got a lot of work to do.

And I plan to get to work right away doing it.

And I need two Senators from this state who want to get something done — not two Senators who are just going to get in the way.

Because look, getting nothing done just hurts Georgia.

The United States Senate should have passed a coronavirus and economic relief package months ago.

Millions of people are out of work.

People are struggling to pay the rent. To pay the mortgage. To put food on the table.

And what is the United States Senate doing?

And they need it right now.

States like Georgia need help — to keep firefighters, cops, first responders, and educators on the job.

We need immediate funding for testing and vaccine distribution.

And we need to get money in people’s pockets right away.

I hope the Congress passes a package right away.

But it should support firefighters, cops, educators, and first responders.

It should support the testing and vaccinations we need.

And it should deliver direct cash payments to people right away.

Your two Republican Senators are not supporting that kind of package.

Both Jon and Raphael do.

There is so much more we can get done.

On COVID. On revitalizing our economy. On health care. On voting rights. On criminal justice. On racial justice. On climate change.

We can get so much done.

So much that can make the lives of Georgians better.

But you need Senators who are willing to do it.

So let me hear you.

Are you ready to vote for two Senators who are doers, not roadblocks?

Are you ready to vote for two Senators who will fight for progress, not just get in the way?

Are you ready to vote for two Senators who know how to say “Yes,” not just “No”?

Let me talk about Jon and Raphael for just a minute.

Jon, born and raised in Atlanta.

Cut his teeth in politics, in justice, for equality, under our dear friend John Lewis.

An immigrant’s son, who travels all across this state sharing his belief in delivering the promise of America to all Georgians.

A husband, whose wife is a doctor at Emory, seeing this pandemic on the frontlines.

A fresh voice who will only do the work of the people. Who will always put your interests first, because his only personal interest is the fact that Georgia is home, his heart.

Jon will always be there for you.

His story is your story of never giving up on the dream of America.

Eleventh of twelve siblings. Grew up in public housing in Savannah.

First in his family to go to college, got there on Pell Grants and work-study.

Literally standing in the righteous footsteps of Dr. King.

As he says, for him public service doesn’t stop at the church door.

After preaching a Sunday sermon, it’s advocating for better health care and a living wage for working people, a fair and more equal justice system, and a fighting chance for all Georgians.

He will bring his soul to this work because that’s who he is.

And he is you. He will always be your voice in Washington.

Electing people of character like Jon and Raphael matters.

They know public service isn’t about them. It’s about you

They know public service isn’t about enriching themselves.

And they know their loyalty isn’t to me or anyone else.

It’s to the people of Georgia.

You know, this is a tough moment in the country.

I know how it feels to lose someone you love. I know that black hole that opens up in your chest. And I know it’s especially hard this time of year when you look across the table and you see that empty chair at Christmas and New Year’s.

My heart goes out to all of you who have lost a loved one or have gotten sick, or are suffering from the disease.

Yet in the darkness, we finally got some good news with the vaccine approval.

Still, it will take time and money to scale up the manufacturing, distribution, and injection of the vaccine.

Meanwhile, the economic crisis has left millions of Americans out of work through no fault of their own. We need to get immediate help to families struggling right now, and we need to get moving on rebuilding our economy, and building it back better than ever.

As tough as this moment is in the country, as dark as these days of winter seem, I am still more optimistic about the future of this country than I have been my whole career.

I know what we can do.

I know what this country is capable of.

I know the future we can build together.

And I’m hoping you will send Jon and Raphael to Washington to help me get it done.

It’s time for us to leave the angry, bitter politics of division behind us.

It’s time for us to come together as a country and start delivering on what we have to get done for the people of America.

It’s time for a United States Senate that is ready to act.

Send Jon and Raphael to Washington, and that will happen.

I ran on the commitment to be a president for all Americans.

Jon and Raphael are running on the commitment to be Senators for all Georgians.

I’m asking you to support them.

Because if you do, the doors of promise and progress will open in Washington.

We’ll start to get done what we have to do.

And it all begins with your vote.

So starting today, you can vote early.

Go to IWillVote.com/GA to find your polling location.

Tell your friends and family.

Just like you did in November, turn out the vote so it’s not even close.

Don’t give them an excuse. Don’t let them take your power away.

Vote for both Jon and Raphael.

And remember the final words left to us by your late Congressman, my dear friend, an American hero, John Lewis: “The vote is the most powerful nonviolent change agent you have in a democratic society. You must use it because it is not guaranteed. You can lose it.”

You have the power to win this election again.

Let your voices be heard so the voice of Georgia can be heard.

There’s nothing beyond our capacity.

There’s no limit to America’s future.

The only thing that can tear America apart is America itself.

So let’s choose hope over fear.

And yes, truth over lies.

It’s time to stand up and take back our democracy.

May God bless you.

May God protect our troops.