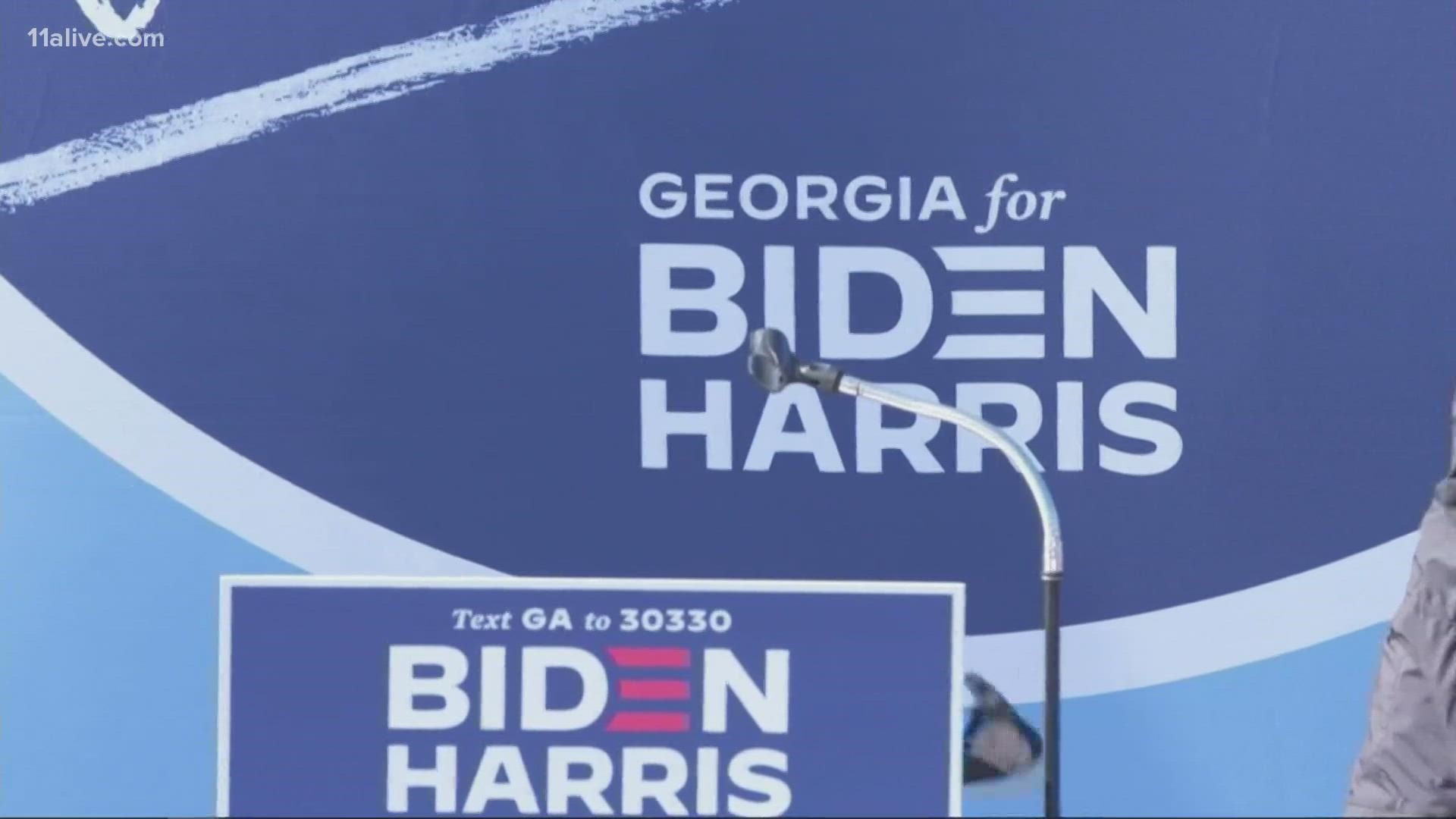 GWINNETT COUNTY, Ga. — Georgia is a battleground state. And the candidates are not letting go of the chance to capture as many voters in the state prior to Tuesday's election.

The running mate for former Vice President Joe Biden, Sen. Kamala Harris, was at a "Get out the Vote" event in Gwinnett County. Harris took the stage at about 1:15 p.m. and spoke for nearly 30 minutes.

The vice presidential nominee landed in  around 11:50 a.m., stepping onto the tarmac to rally voters in nearby Gwinnett County.

"It’s good to be back in Georgia," Harris said as she landed at the Peachtree-DeKalb Airport.

Watch a replay of the event, here:

"Obviously, the election is very near in terms of Election Day and we’re here to remind Georgians of the importance of their vote and, of course, the significance of what Joe and I care about … in terms of a state that’s been so hard hit in terms of the virus and the public health impact as well as the economic impact," she said to reporters.

She echoed what many have said about the Peach State.

“Georgia is an important state. And the people of this state have a lot at stake in terms of the outcome of this election. We’re here, and I’m here, to listen and to let them know I’m thinking about them.”

During the event, Harris thanked Abrams for proving Georgia is now a battleground state.

RELATED: President Donald Trump in Georgia today | What you need to know

Harris told a few hundred supporters at the drive-in rally outside the Infinite Energy Arena in Duluth, “Look at where we are in Georgia."

Georgia hasn’t sided with Democrats in a presidential race since 1992, and Trump can’t afford to lose its 16 electoral votes.

“We have two days to go. And I came back to Georgia because I wanted to just remind everybody that you all are going to decide who is going to be the next president of the United States. I’m back in Georgia to thank you for all you’ve been doing all these weeks and months,” she told the crowd. “We still have a ways to go … This is not the time to let up. This is the time to put our feet on the pedal.”

This event comes on the same day as another final rally for President Trump is taking place in Rome, Georgia.

With more than 91 million votes already cast in the 2020 election, Trump and Biden are out of time to reshape the race. Instead, they're focusing on their base and making sure that any potential supporters have either already voted or plan to do so in person on Tuesday.

This is Harris’ second trip to Georgia. She was last here on Friday, Oct. 23 for a rally at Morehouse College.

Former President Barack Obama will be in the Peach State on Monday to make a last minute push for the Biden/Harris ticket.

-- The Associated Press contributed to this report.