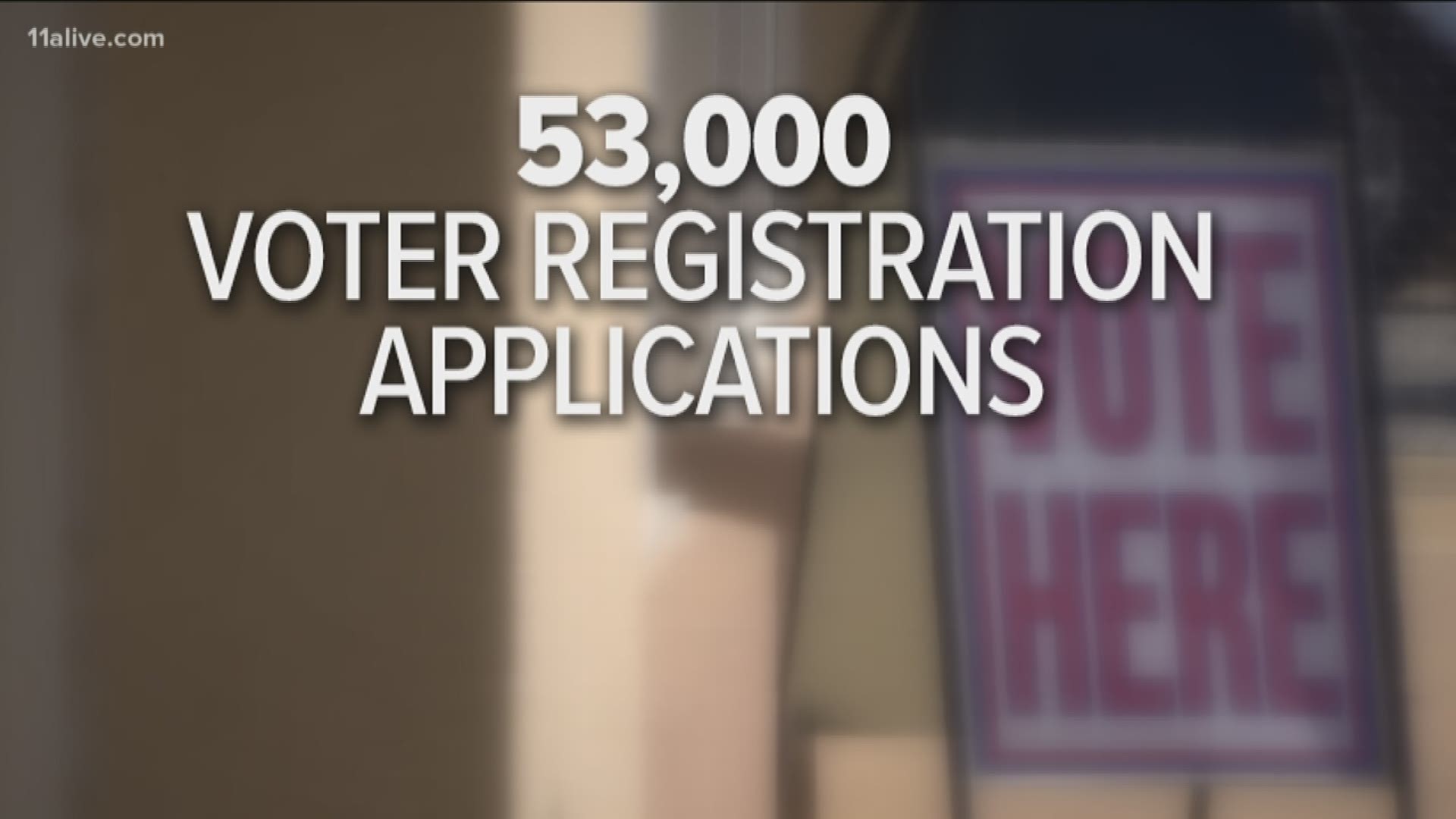 Now, a group has flied a lawsuit, claiming the "exact match" law is discriminatory, and a federal court has set an Oct. 23 hearing.

Kemp, Georgia's current secretary of state, is accused of blocking 53,000 voter registration applications, According to the Associated Press, the thousands of applications are sitting on hold with Kemp's office.

The Lawyers’ Committee for Civil Rights Under Law filed the complaint. Tuesday was the deadline for people to register to vote in the state if they want to participate in the November election.

MORE | Brian Kemp's office to be sued for purging 700,000 voters from Georgia rolls

Abrams' campaign released the following statement about the allegations:

“As he has done for years, Brian Kemp is maliciously wielding the power of his office to suppress the vote for political gain and silence the voices of thousands of eligible voters - the majority of them people of color.

This isn’t incompetence; it’s malpractice. It is no surprise that Kemp is reprising these tactics now when multiple recent polls show his race against Stacey Abrams to be a dead heat, as her message of jobs, health care, and public education is resonating with voters.

The Secretary of State’s office must do away with the discriminatory “exact match” program and process all voter registrations immediately. In addition, Brian Kemp needs to resign his position, so that Georgia voters can have confidence that their Secretary of State competently and impartially oversee this election.” - Abrams for Governor Director of Strategic Communication Abigail Collazo.

The complaint also alleges the "exact match" law is unlawful.

"Georgia Secretary of State Brian Kemp has been a driving force behind multiple voter suppression efforts throughout the years in Georgia," said Kristen Clarke, president and executive director of the Lawyers’ Committee for Civil Rights Under Law. "If there is one person in Georgia who knows that the 'Exact Match' scheme has a discriminatory impact on minority voters, it's Brian Kemp because we successfully sued him over a mirror policy in 2016. There exists a stark parallel between the voter suppression schemes levied by states around the country prior to the Voting Rights Act of 1965 and the insidious tactics used by Secretary Kemp to capitalize on the Supreme Court’s decision in Shelby County to gut the Act and its protections for African Americans and other people of color that came with it. No less than 70 percent of people impacted by 'Exact Match' are African-American. We will continue fighting voter suppression to ensure a level playing field for voters across Georgia this election cycle.”

Under the state law, voter applications must match a driver's license, state ID card, or social security number. An application could be held because of an error, even one as small as a dropped hyphen in a last name.

Kemp’s team said those applicants can still vote as long they verify their information at the polls.

Wednesday, Kemp's office said Georgia shattered the all-time voter registration record with over 6,915,000 active and inactive voters on the roll.

“Despite what you hear or read, the numbers are clear. While outside agitators disparage this office and falsely attack us, we have kept our heads down and remained focused on ensuring secure, accessible, and fair elections for all voters," a news release said on the Secretary of State's website. "The fact is that it has never been easier to register to vote and get engaged in the electoral process in Georgia, and we are incredibly proud to report this new record.”

As far as the 53,000 voter registration applications that are pending, Abrams team says Kemp should resign because of it. Kemp’s spokesperson called it a “manufactured crisis” that Abrams is using to motivate her supporters.

"The 53,000 Georgians on the 'pending' list can vote in the November 6th election. They were placed on the 'pending' list because Abrams and her shady, voter registration group are more concerned with making money than ensuring accuracy. Why would anyone want such a dishonest and corrupt politician like Stacey Abrams to serve as their governor?" - Ryan Mahoney, Kemp for Governor

11Alive's exclusive poll shows a tight race between Kemp and Abrams with 47 percent of people saying they’d vote for Kemp, and 45 percent would vote for Abrams.

"We have an energized electorate that has been watching terrible decision making at the federal level and there is a real understanding of the consequences of elections," she said.

"We gotta get out and vote at the same level when this country and this state elected Donald J. Trump president," Kemp added.