Lawyers Sidney Powell and Lin Wood suggested at a rally Wednesday Georgians should not vote as long as Dominion machines are in use. 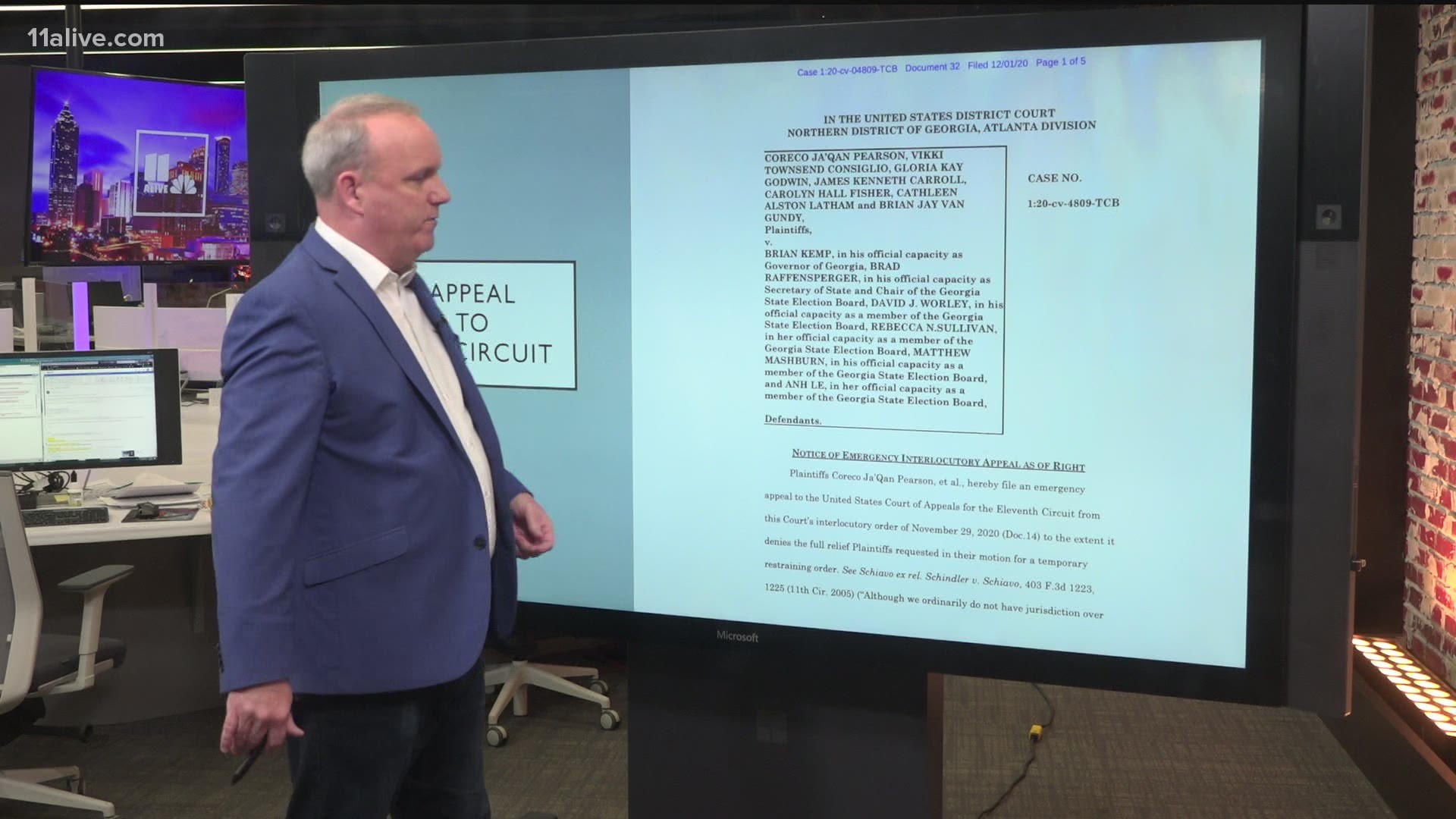 ATLANTA — A Georgia election official on Wednesday stressed that all voters are encouraged to vote in the upcoming Jan. 5 Senate runoffs, which will determine the balance of power in the U.S. Senate, after prominent attorneys aligned with President Trump's legal effort suggested Georgians shouldn't participate.

Attorneys Lin Wood and Sidney Powell held a rally in Alpharetta, during which a vocal pro-Trump crowd -- which started things off by chanting "Lock Him Up," in reference to Gov. Brian Kemp -- were effectively told they shouldn't legitimize the state's election process next month.

"We're not gonna go vote on January 5th on another machine made by China. You're not gonna fool Georgians again," Wood said. "Why would you go back and vote in another rigged election? For God's sake fix it. You gotta fix it before we'll do it again."

He is sometimes referred to as the "attorney for the damned," particularly in connection with some of his other high-profile clients, including former U.S. Rep. Gary Condit following the 2001 disappearance of intern Chandra Levy, the parents of Jon Benet Ramsey following accusations in a CBS miniseries, the 20-year-old accuser in the 2004 Kobe Bryant sexual assault case, and the late Herman Cain in 2001, while defending against sexual assault allegations.

Powell, who filed the so-called "Kraken" lawsuit in Georgia alleging a conspiracy to rig the election for Joe Biden with the state's Dominion voting machines at the heart of her claim, echoed Wood's sentiment during the Wednesday rally.

"I think I would encourage all Georgians to make it known that you will not vote at all until your vote is secure," she said.

A short time later, Gabriel Sterling of the Secretary of State's Office, characterized their rhetoric as reckless. He also said their statements about Georgia's hand-count audit were a lie.

"It's this kind of lying and this kind of rhetoric that are continuing to inflame passions on the ground unnecessarily and it's wrong," Sterling said. "We encourage all voters to vote in an election -- Democrat, Republican, Independent, Green, Socialist, you know, Libertarian, whatever party you wanna be -- go out and exercise your vote. That is your right as an American."

Touching on the question of Georgia's audit, Sterling said that the claim that Dominion machines switched votes and that machines were again used in the audit to confirm a fraudulent total was "not true."

RELATED: Georgia Sec. of State writes he's being 'thrown under the bus' by Trump

"Again, I'm gonna remind everybody, we did a hand audit that human beings did - no machines were used," Sterling said. "And in fact, somebody asked Lin Wood and Sidney Powell -- 'The hand audit said this, how can the algorithm thing have worked?' And they said 'No, no that wasn't a hand audit they used the machines to count this.' They lied to the people are who believing them."

The dueling sentiments highlight an awkward and growing split among Georgia Republicans, of whom Sens. Kelly Loeffler and David Perdue need unified support in order to win the runoff elections and retain their seats.

Wood, representing a faction of hardcore believers in the idea that President Trump has actually won the election, cast Loeffler and Perdue -- as he has other Republican officials, including Kemp, Sec. of State Brad Raffensperger and Lt. Gov. Geoff Duncan -- as possible traitors to the cause.

The president's most ardent supporters have pushed for a special session of the Georgia General Assembly to change the state's election law so that they can hand-pick Electoral College voters who will give Georgia's votes to Trump.

President Trump himself is set to come to Georgia on Saturday, and it's not clear how he will toe the line between these visible supporters of his, such as Wood and Powell, and the reason for his visit - supporting Loeffler and Perdue in their re-election bids for the Jan. 5 runoff.