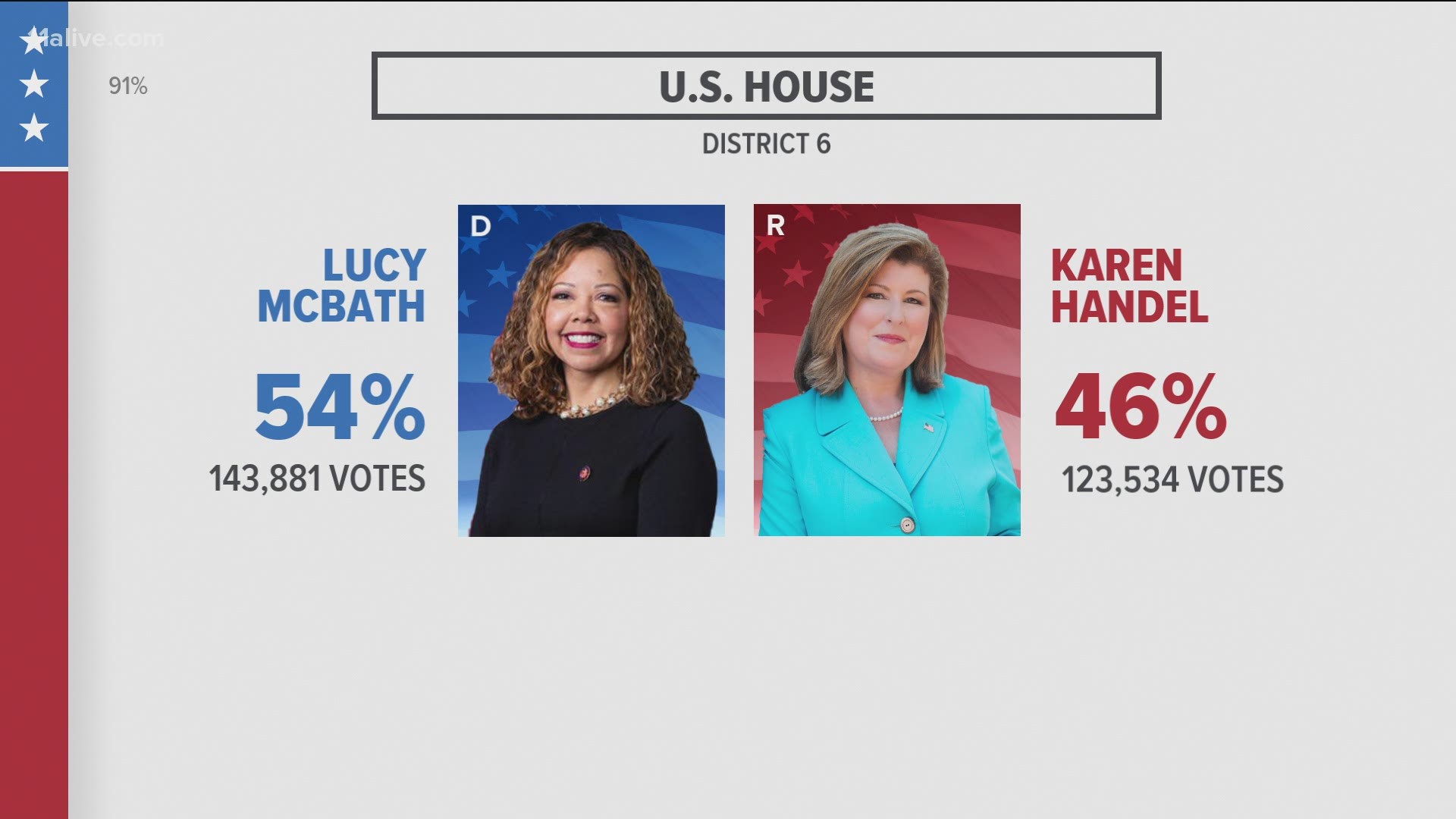 McBath defeated Handel in the race.

In a statement released on her Facebook page, Wednesday, McBath - who drew inspiration to run from her son Jordan Davis' death - touted her record in Congress on healthcare, gun violence and veterans' assistance and said "you showed that when you send a mom on mission to Washington, you get results," she said.

"It is necessary more than ever to have strong leaders fighting to bring us together," she added.

To understand the race, it's important to provide context of why this  U.S. House seat is being watched very closely. While McBath, a Democrat, was up for re-election, the seat once belonged to Handel, a Republican.

She lost to McBath in 2018 in one of the tightest contests on the ballot that year. Even then, voters in the 6th District - who live in parts of Cobb, Fulton and DeKalb -- were rapidly shifting from Republican to Democrat. McBath won the race the last time around by less than 3,000 votes, flipping the seat.

The Congressional races are also very important in the larger picture, because each person represents one of 435 districts across the nation, all working to have their voices heard. Democrats currently have a 232 to 198 majority over Republicans.

Bookmark this page and return for real-time 2020 Georgia election results as they come in once the polls close on November 3. Download the free 11Alive News app (Google Play | Apple devices) to receive alerts as the numbers come in. Send us any voting day issues or questions by text at (404) 885-7600.

Who is Lucy McBath?

Her focus on politics started after her son, Jordan Davis, was killed in 2012 in Jacksonville, Fla at a gas station. He was shot by a man who objected to the loud music playing in the car that Davis was inside of.

The case grew national attention. The gunman, Michael Dunn, used Florida's stand-your-ground law as his defense. He was not found guilty of murder in his first trial. In an October 2014 retrial, Dunn was convicted of first-degree murder and sentenced to life in prison.

McBath has advocated on policies for gun control. She joined with other mothers of African American children who lost kids to gun violence or law enforcement to form Mothers of the Movement, making a number of notable appearances, including at the 2016 Democratic National Convention.

She also serves on the Committee on the Judiciary.

The Congresswoman is a two-time breast cancer survivor. She describes herself as a "mom, a wife, an author and an advocate.”

Who is Karen Handel?

In 2017, she was the winner of an-18 way special election. Her top contender at the time was Jon Ossoff - who is now running for one of Georgia's U.S. Senate seats. That election was held replace Tom Price, who left office to serve as President Donald Trump's secretary of the U.S. Department of Health and Human Services. Price served only a few months in the position before resigning in September 2017.

The Handel-Ossoff contest drew the nation's attention and became most expensive congressional election in U.S. history. Her website says she spent her time in Congress tackling difficult issues like human trafficking and opioid addiction.

When she didn't beat McBath in 2018, she said the loss was "indeed disappointing," but said there was still so to be grateful for.

She's lived in the 6th district with her husband, Steve, for more than 25 years. Before her time in Congress, she also served in other political roles, such as as Chairman of the Fulton Commission and Secretary of State.

The state has seen record early voting and absentee voting numbers, which can ease voter gridlock on election day, plus it puts voting data into computer databases more quickly.

While some counties started opening and processing ballots before Election Day, the votes can't actually be tabulated until after polls close Tuesday, per state law.