Q&A with Stacey Abrams: What's next for the former candidate for governor

11Alive speaks with the now-former candidate for governor about her future in private work and politics. 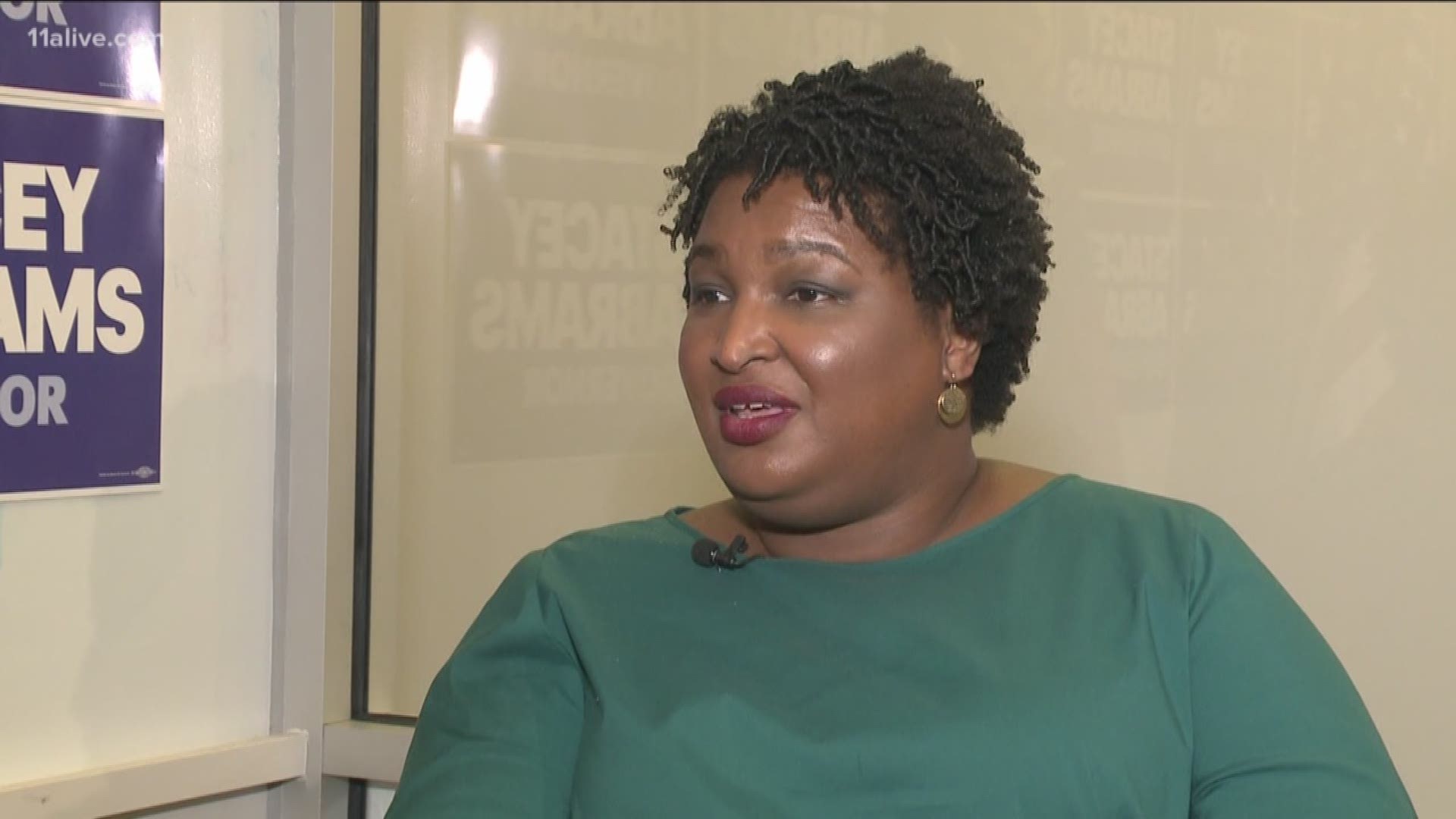 It's just one day after she officially stepped out of the race for governor. Now, Stacey Abrams is sitting down with 11Alive's Hope Ford in a one-on-one interview. This is what she had to say.

Hope Ford: How are you?

Stacey Abrams: I really am good. It’s disappointing and I’m sad but I know that the work continues. My parents raised me, you fight, and you fight until the work is done. And this is a momentary delay but we’re going to keep working.

Ford: President Trump gave you a bit of praise when he tweeted this was hard fought, what do you think about that?

Abrams: I did not read it.

Ford: Do you think this election was stolen from you?

Abrams: I believe this election was not fair. I believe that systemic voter disenfranchisement but also disinvestment and incompetence lead to a result that is not a fair reflection of what could have happened. So, we have to make sure that no one else faces this conversation. And that’s why I spoke not only about my election but the election of Dan Gassoway, a Republican who had to go to court to force a redo of his election because ballots were sent out to the wrong people and he was not given a fair election, so this is not a partisan issue. This is a failure of management. This is a systemic disenfranchisement process and problem and it is a solvable one and so my responsibility is not to bemoan my fate but to change the fate of others.

Ford: What do you think about people trying to make it a partisan issue and saying the Democrats are sore losers and they are the ones stealing elections?

Abrams: Well, Debbie Dooley, who is a Tea Party leader, said there are challenges embedded in how absentee ballots work, that there is a deep problem with having no uniformity. There have been several court cases that have been successful in this election alone, that this was a gross mismanagement that there was something inherently flawed in how the elections were being held. And we, over the course of a week got four different federal judges to agree that there are deep systemic flaws in our system. That means there is something wrong, there’s something rotten in Denmark and it is our responsibility to fix it. And that’s not a partisan issue, because Democrats aren’t on every ballot. And that’s why I think Republican Dan Gassoway is so important as an example. It was a Republican election that a judge had to overturn and in an extraordinary statement saying that it was not fair and that voters should have confidence in the system and that confidence does not exist.

Abrams: We’ve been fighting this battle for a very long time. I started the new Georgia Project in 2014 when I realized how many people were not being registered to vote. And we continued that work in 2015 but starting to monitor elections boards, when we saw how many polling places were being closed. This has been an ongoing issue. My hope was going to be that as the next governor I could have addressed it from the top, but I’m going to leverage all of the mechanism of our democracy. We’re going to use our court system to highlight and force legal remedies, but we are also going to use grassroots and harness the energy of all of these Georgians that are excited about voting for the first time, but who are also deeply saddened and disappointed by how hard it is to exercise your rights in the state of Georgia. So, my mission has always been to see a problem, find a solution and work as hard as possible to see that solution to fruition.

Ford: And, just from a historical angle, how does it feel to know it was that close of a race as an African American woman in Georgia?

Abrams: I’m proud of what we accomplished. I am proud to have had the closest election since 1966. I’m proud that our team received more votes than any Democrat in the state of Georgia. I’m proud that we passed our 2014 number, not by 200,000 which was my target, but by 800,000. But, I’m even more proud of the new voters, those young people who stood up for the first time, those communities that are often disenfranchised, or economically disadvantaged who said I’m going to stand up this time. My responsibility is to make sure that they know that this wasn’t just about me, it was about all of us and that we can do the work necessary to make it work next time.

Ford: Celebrities are now saying they are going to boycott Georgia, by refusing to come here, the Hollywood of the South as long as Kemp is governor. What’s your response to that?

Abrams: I don’t want to cost people jobs. This is not about Brian Kemp. His failures, his mismanagement, his gross incompetence, lead to the mismanagement. But, there were other actors. But Georgia is a state that should continue to grow and thrive, and I want opportunity to continue to come here. I am first and foremost a Georgian. And my responsibility is to make sure no one denies opportunity to a hairdresser or a grip of a gaffer because of this. Because we want those people to not only have jobs in Georgia, but we want their votes to count Georgia. So, want I want all of my allies to do it to help me lift up the first of Fair Fight Georgia get more people engaged and involved and drive progress forward

Ford: Is governor in four years still a goal or are you interested in something else?

Abrams: I am not sure what my next political office will be, but I am going to remain engaged in politics. But, my responsibility right now is to act as a private citizen and four on building out the infrastructure we started. We built an unprecedented team. We were able to transform House races and Senates races and counties in ways that no one predicted. And the responsible thing to do is make sure we fix what is broken and that we build on our successes and that will be my focus for the immediate future.