The 51-year-old Democrat rises to the U.S. Senate from the pulpit of Ebenezer Baptist Church. 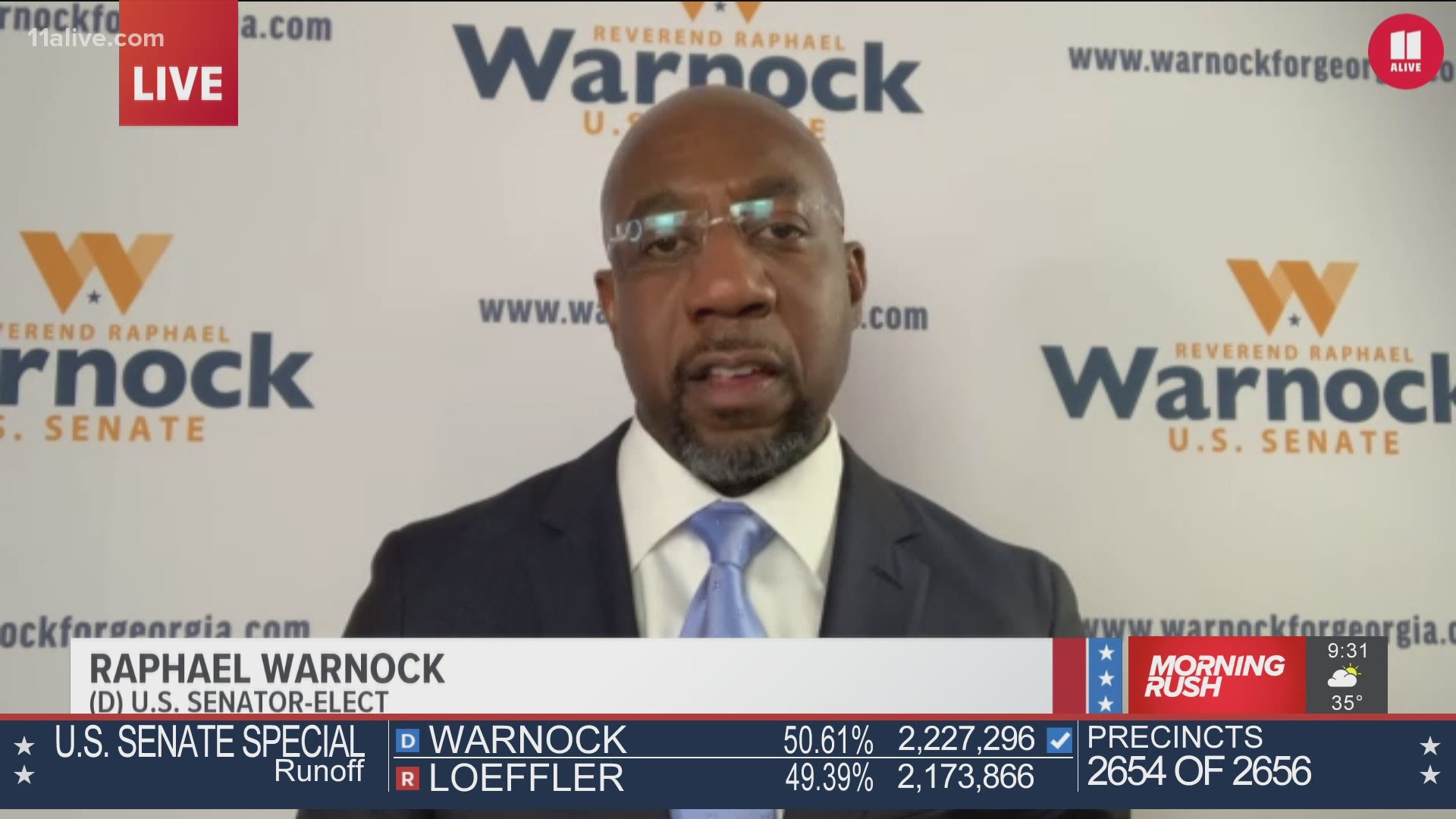 ATLANTA — Raphael Warnock, a reverend who grew up in public housing in Savannah and rose to occupy the pulpit that once belonged to Martin Luther King, Jr., will become the first Black U.S. senator from Georgia with a projected victory early Wednesday morning.

With counting done for the night and some outstanding votes remaining, Warnock held his lead over Sen. Kelly Loeffler, which was just enough for the Associated Press, NBC and other major news organizations to project him the winner.

If the margin holds, it will be enough to avoid the .5% cutoff for a possible recount.

RELATED: Here is where the Georgia U.S. Senate races stand

It marks an incredible political rise for the Ebenezer Baptist Church pastor, who has never held office.

He had instead established his political bonafides as an advocate, advancing social justice causes - most notable among them health care - from his position at the head of the Atlanta church MLK helmed throughout the 60s.

His advocacy also became a flashpoint of the campaign, as he fended off charges of radicalism from Loeffler, over past sermons that critiqued American imperialism in harsh terms.

"When preachers tell the truth, very often it makes people uncomfortable,” Warnock said in a Fox News interview during the campaign.

RELATED: Who is Rev. Raphael Warnock

His victory also marks a historic affirmation of Black political leadership and organizing in Georgia. The son of a father who was a veteran and preacher and mother who picked cotton and tobacco in the summers, Warnock will represent in the Senate a state that historically worked to suppress the collective power of its Black citizens.

“The other day, because this is America, the 82-year-old hands that used to pick somebody else’s cotton picked her youngest son to be a United States senator,” he said, in reference to his mother's vote. “Tonight, we proved with hope, hard work and the people by our side, anything is possible.”

A Morehouse man, an Alpha Phi Alpha brother, and a leader of a historically Black church, Warnock embodies many of the political forces that have contributed to the abrupt and remarkable shift in Georgia's political balance.

During the campaign, he frequently evoked how his father told him to get up early every morning, whether anything was going on or not, and "put your shoes on" - to be ready for whatever might come.

Georgia, today's our day. Polls open at 7am. Get your shoes on. Get Ready. Go vote. https://t.co/nNbOv8iAKb pic.twitter.com/N1FAHIotY0

What has come, it now appears, is elevation to the United States Senate.

"I remember my dad used to wake me up every morning at dawn. It was morning. But it was still dark. It’s dark right now. But morning comes. And scripture tells us weeping may endure for the night, but joy comes in the morning," he said in a speech as victory appeared near. "Let us rise up, greet the morning and meet the challenges of this moment. Together, we can do the necessary work and win the future for all of our children."