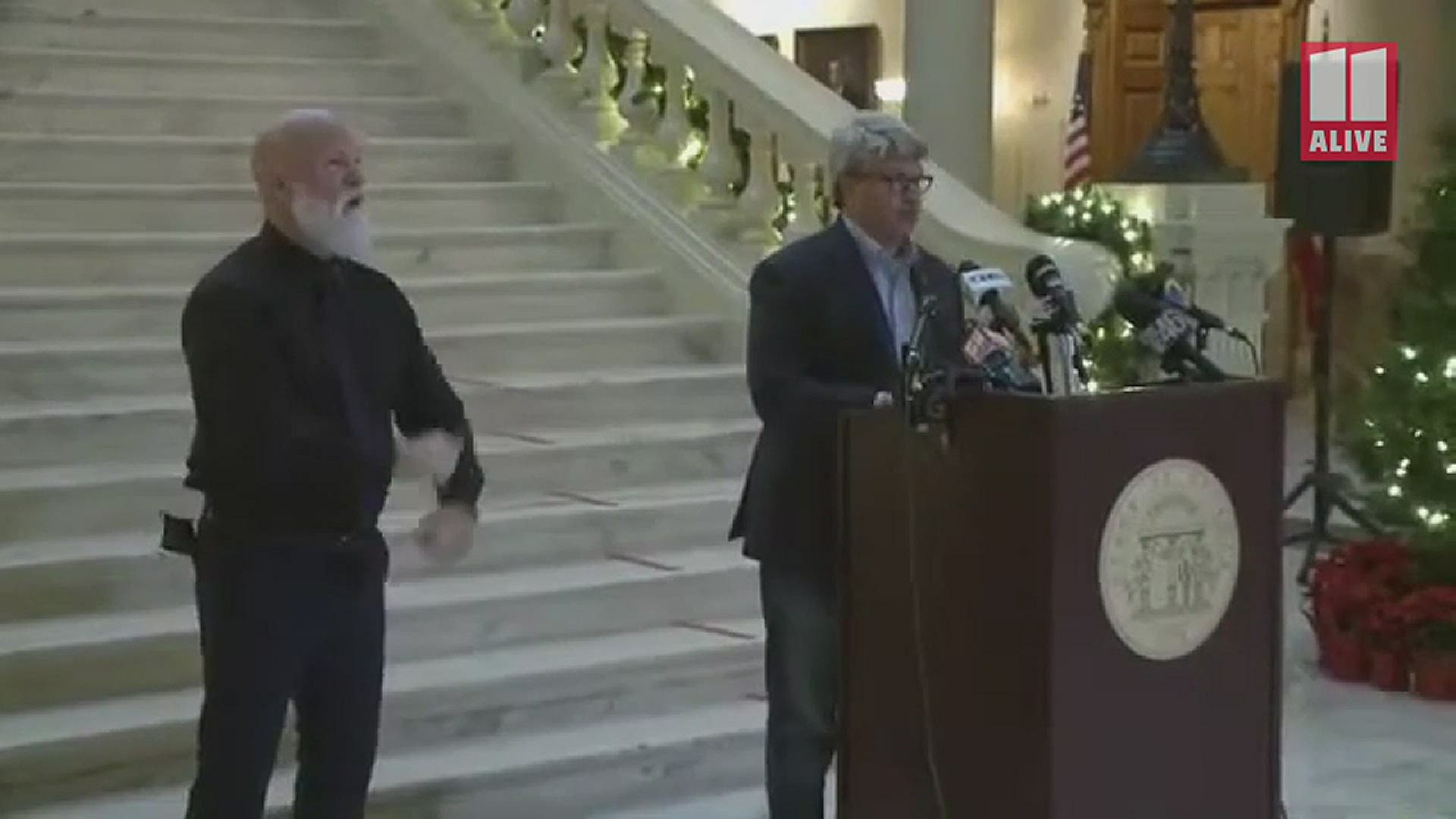 ATLANTA — Georgia began counting its votes for the third time last week. Many counties paused for the Thanksgiving holiday and will pick up today. This official recount came nearly three weeks after Election Day.

Joe Biden won Georgia by more than 12,000 votes, when its results were finally certified, following a roughly weeklong hand-count audit of all of the state's 5 million votes.

This recount is being done by machine instead of hand, absent a court order or through certain provisions in Georgia law to account for malfunctioning machines.

If you missed it over the weekend, President Donald Trump said he was “ashamed” for endorsing Gov. Brian Kemp, saying on Fox News that the Republican governor has “done absolutely nothing” to question the state’s results. Trump has made baseless accusations that illegal votes cost him the election in Georgia and beyond.

In Fulton County, they resumed their recount over the weekend, however, elections officials confirmed to 11Alive on Sunday that a newly-purchased Dominion Voting Systems mobile server had crashed earlier in the day.

"Technicians from Dominion have been dispatched to resolve the issue," Fulton County officials said in a statement. "The Georgia Secretary of State’s office has also been alerted to the issue and is aware of efforts to resolve the problem."

The county plans to resume its counting process on Monday morning.

5:00 p.m. | Fulton County election officials said they anticipate they will complete the recount of its ballots by the deadline outlined by the Secretary of State's Office.

Officials said recount teams left for the day at 5 p.m. The recount will resume at 7 a.m. on Tuesday, Dec. 1 and continue until 11 p.m. They will work on Wednesday, beginning at 8 a.m. and work until the recount is finished.

4:00 p.m. | In a 4 p.m. update, the Secretary of State's office said 43 counties have finished their work on the recount, the state's third, according to Gabriel Sterling.

Here in metro Atlanta, Sterling said Cobb and DeKalb done with physical scanning and are working through the adjudication process. Gwinnett and Fulton still have some ballots left to scan.

"Everybody else is somewhere in the process of finishing up the scanning," Sterling said.

You can watch the full press briefing below.

2:30 p.m. | The Secretary of State's office will hold another press conference at 4 p.m. We will stream it here and on the 11Alive YouTube channel.

1:45 p.m. | Dominion Voting Systems CEO John Poulos wrote an editorial in the Wall Street Journal saying in part: "...allegations against Dominion are bizarre, but I’ll set the record straight. Dominion is an American company, now headquartered in Denver. Dominion is not and has never been a front for communists..."

"[Dominion] has no ties to Hugo Chávez, the late dictator of Venezuela. It has never been involved in Venezuelan elections. None of Dominion’s systems use the Smartmatic software...there is no secret ‘vote flipping’ algorithm," responding to Sidney Powell's Georgia lawsuit.

1:30 p.m. | The Georgia Democratic Party has filed a motion to dismiss Sidney Powell's lawsuit. In a statement, they said:

"Plaintiffs ask this Court to disregard the will of the voters—whose votes will be counted at least three times—and enter an extraordinary order decertifying the results showing that President-Elect Biden won the state of Georgia and unilaterally 'requiring Governor Kemp to transmit certified election results that state that President Donald Trump is the winner of the election. Since the 2020 general election, various groups and individuals—unwilling to accept President-elect Biden’s victory—have filed baseless lawsuits attacking the election’s legitimacy."

GA Dem Party filed Motion to Dismiss Sidney Powell lawsuit:
"Plaintiffs ask this Court to disregard the will of the voters—whose votes will be counted at least three times—and enter an extraordinary order decertifying the results showing that President-Elect Biden won..."
(1/3) pic.twitter.com/C00kipB2EJ

11 a.m. | Gabriel Sterling with the Secretary of State's office said Georgia's Republican General Assembly in 2019 approved the ballot marking devices with an auditable paper trail. Gov. Kemp's office had nothing to do with it. "Zilch, Nada," he said. Added that Dominion machines "switching votes" is "a fever dream, an Internet cabal."

Georgia's Republican General Assembly in 2019 approved the Ballot Marking Devices with an auditable paper-trail. Gov. Kemp's office had nothing to do with it, "zilch, nada," says @GabrielSterling. Says Dominion machines "switching votes" is "a fever dream, an internet cabal."

10:55 a.m. | Gabriel Sterling with the Secretary of State's office said a Fulton County elections official did not follow instructions from the vendor (Dominion) that led to the server crash.

He says their office is not "wiping" data from voting machines or servers. He added that "rampant speculation" led to this conspiracy theory and criticized the county for not informing the public for hours.

"Voting in Georgia when you are not a resident in Georgia is a felony," he said.

Gabriel Sterling says four groups are the subject to this investigation. He mentioned college students registering, which is fine so long as they don't intend to switch back to their 'home' state. They have to intend to be residents of Georgia.

10:46 a.m. | Following comments from President Trump and continuous claims online, Raffensperger said: "There are those who are exploiting the emotions of many Trump supporters with fantastic claims, half truths and misinformation, and frankly, they are misleading the president as well."

“Georgia law prohibits the Governor from interfering in elections. The Secretary of State, who is an elected constitutional officer, has oversight over elections that cannot be overridden by executive order. As the Governor has said repeatedly, he will continue to follow the law and encourage the Secretary of State to take reasonable steps - including a sample audit of signatures - to restore trust and address serious issues that have been raised.”

9:45 a.m. | The president has Tweeted, again, about Georgia and Gov. Brian Kemp, calling him "hapless."

"Why won’t Governor @BrianKempGA, the hapless Governor of Georgia, use his emergency powers, which can be easily done, to overrule his obstinate Secretary of State, and do a match of signatures on envelopes. It will be a “goldmine” of fraud, and we will easily WIN the state...."

Twitter flagged the tweets saying "This claim about election fraud is disputed."

Why won’t Governor @BrianKempGA, the hapless Governor of Georgia, use his emergency powers, which can be easily done, to overrule his obstinate Secretary of State, and do a match of signatures on envelopes. It will be a “goldmine” of fraud, and we will easily WIN the state....

He went on to talk about the absentee ballots and envelopes.

9:15 a.m. | Georgia Secretary of State Brad Raffensperger announced he will hold a press conference this morning at 10:30 a.m. You can watch it here or on the 11Alive YouTube channel.