The pandemic has exacerbated the shortage of election day poll workers. Now, the race is on to recruit and train young people for the biggest election of the year. 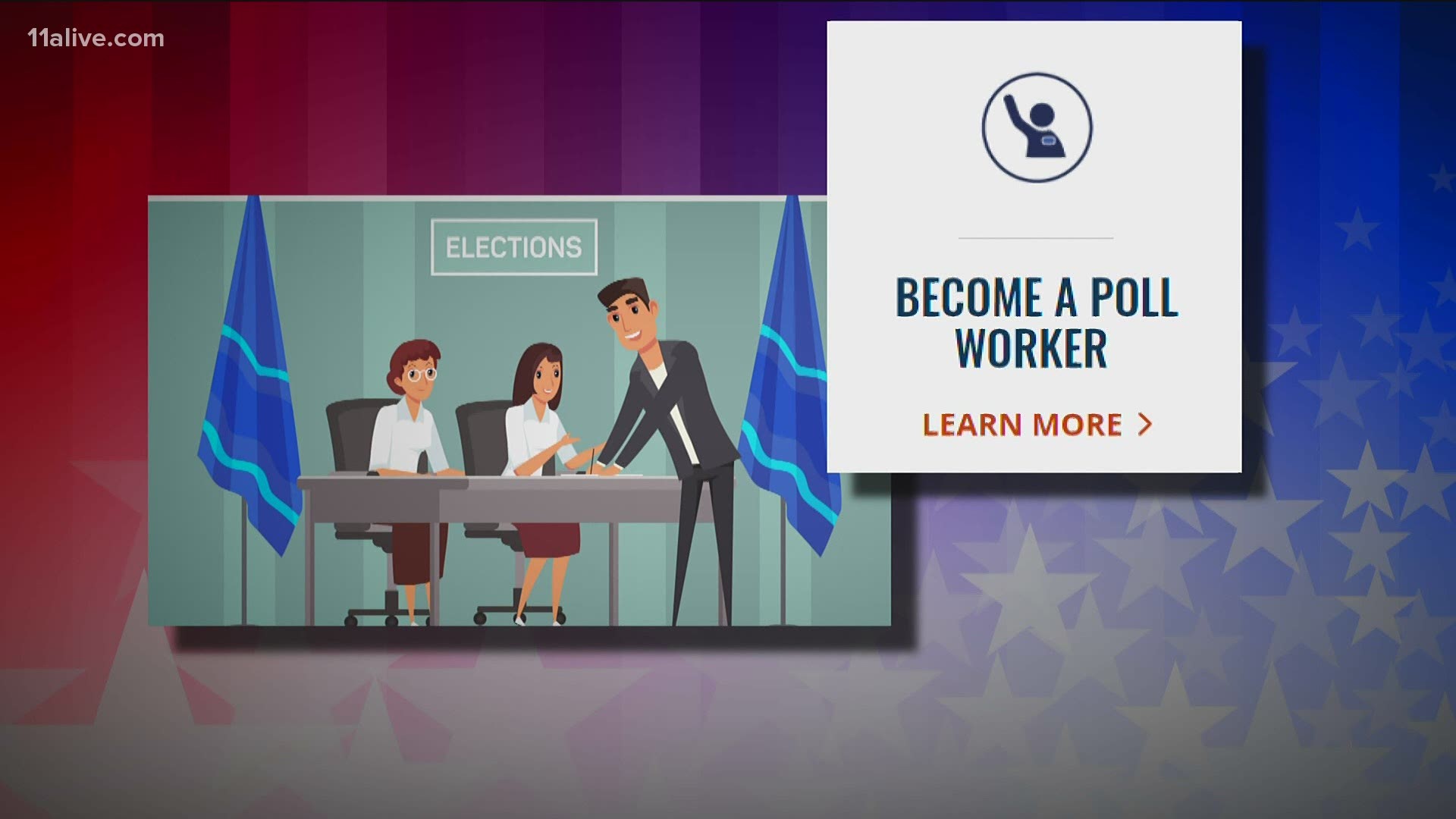 ATLANTA — When Evan Malbrough graduated from Georgia State University (GSU) in the Spring, he was greeted by a global pandemic and an economic crisis.

He had opened the first student-run polling precinct on campus, so he used that as inspiration and jumped into an untapped job market.

“My first job out of college was becoming a poll worker,” he said.

Counties have struggled for years to find enough people to work the polls on Election Day. The pandemic has exacerbated the shortage. Now, the race is on to recruit and train young people before the biggest election of the year.

Malbrough said there’s no leeway for error on election day, so it can be a pretty intense job. In a major election, he compares it to working the Chick-fil-A lunch rush.

RELATED: How to protect yourself while voting during the pandemic

“Except if you mess up somebody’s order they can always return it and you can get them a new order, but if you mess with somebody’s vote, there’s a huge chance you might have suppressed it,” he said.

Since most poll workers are over the age of 60, the COVID-19 pandemic has worsened the shortage of people to work the polls.

So, Malbrough started the Georgia Youth Poll Worker Project to recruit younger people who aren’t so susceptible to the deadly virus.

“Since July 1, we have recruited 800 young people to become poll workers in metro-Atlanta,” he said.

Six-thousand people have applied to be poll workers in Fulton County, alone. They have more than they need for Election Day. The Secretary of State’s office has recruited 29,000 people statewide.

However, in Georgia, you can only work a precinct in the county where you’re registered to vote. You must be either a resident or employee of the county.

“You serving as a poll worker means the county has more tools to give a voice to marginalized communities through you,” Malbrough said.

RELATED: Here's how you can report problems at the polls

Malbrough said most young people didn’t realize working the polls was a paid position, not a volunteer position. Once they learn, he said it’s the biggest incentive.

“Yeah! And I don’t see anything wrong with that. It’s work. It’s labor,” he exclaimed.

Malbrough is also a trainer. He teaches training classes throughout metro-Atlanta.

After the June primary, the process to become a poll worker has gotten more rigorous. The dysfunction and long lines prompted many counties to make adjustments to the training process, including smaller in-person classes, individual machines to practice on, and a more difficult test to pass.

“[The training classes] range from four hours to eight hours depending on the county. Then, if you pass the class, you get a certificate and you can go to work on Election Day,” Malbrough explained.

Malbrough said they cover everything from setting up and breaking down the precinct to which college IDs in the state of Georgia are valid voter IDs.

Election Day, he warned, is long and grueling.

“Most counties have poll workers get there between 5 a.m. to 6 a.m. You can’t leave, and there are no shifts. You are there for the entire day. So, in the situation of a perfect election, the earliest you could possibly leave is 8:15 p.m. to 8:30 p.m.,” he said.

In contrast, if there is a high voter turnout, like we may see in November, or there are long lines or multiple election issues, Malbrough said to expect to stay well into the night.

“Me and some of my fellow poll workers have stayed at some polling sites until 2 or 3 a.m.,” he said.

His pro tip: pack snacks. Also, ask about food, because some counties provide lunch and dinner.

Since poll workers arrive before polls open and stay long after they’re closed, they’re encouraged to vote early. You aren’t allowed to vote at the precinct you’re working unless it’s your assigned location. Malbrough says that rarely happens.

But, he said don’t let that deter you.

“It’s a great opportunity to see how democracy works firsthand because you can be part of it, and then it’s a great way to get paid.

The best way to get started is to go to your county website and look for a link to apply. If you really want a chance to work the Presidential election in November, he said to reach out soon, because October will be full of training leading up to the big day.