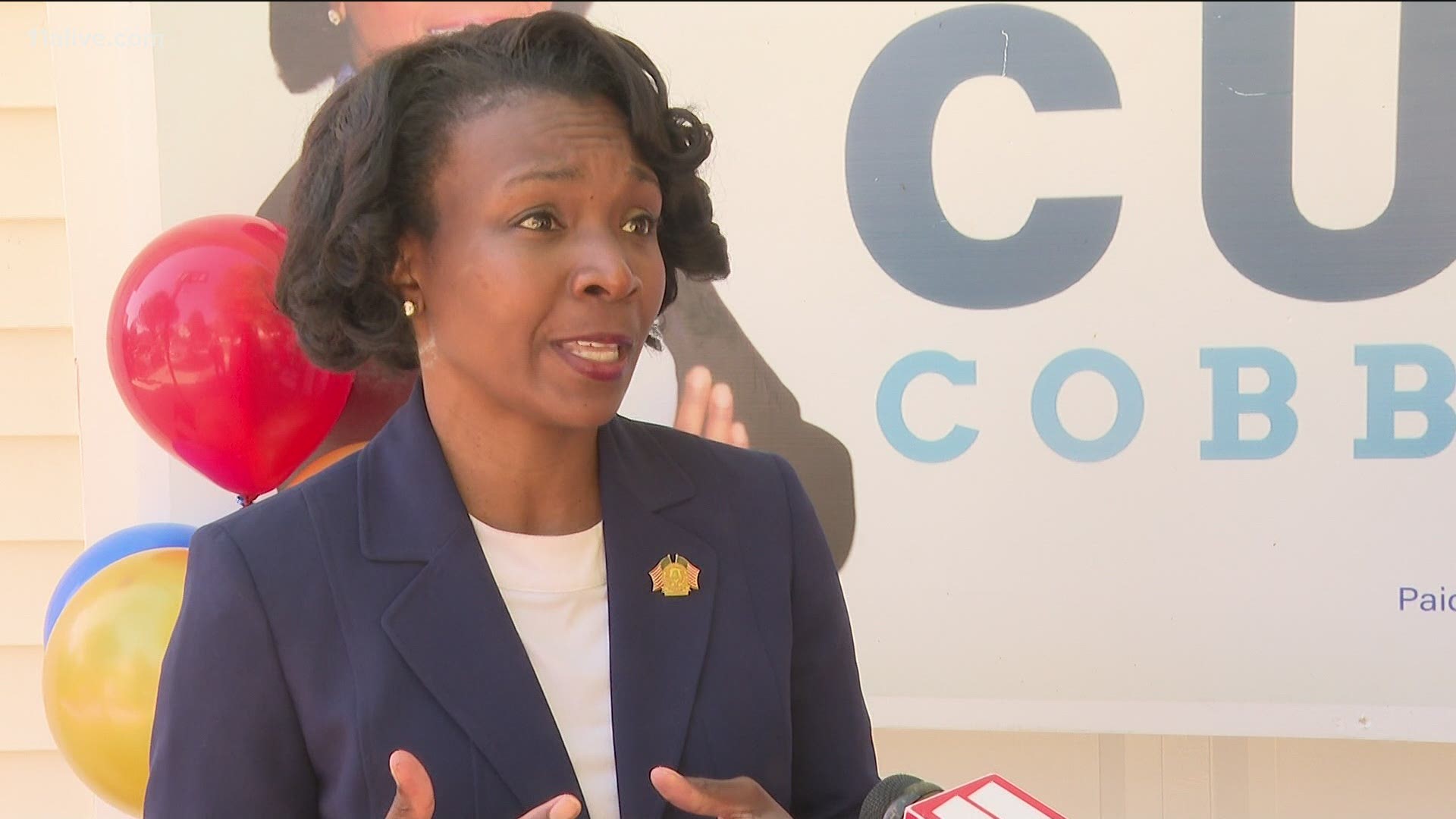 MARIETTA, Ga. — The demographic and political realignment of Cobb County continued on Tuesday with three major offices changing hands from the Republican Party to the Democratic Party.

Each of the three Democratic office-winners are Black -- which represents a historic change for the previously largely white and conservative suburban county.

As with other suburban areas around the nation, Cobb County has experienced a significant demographic shift over the past 20 years.

Cobb County is directly northwest of Atlanta and Fulton County. As of 2019, the US Census Bureau estimated its population at 760,141, making it the state's third-most populous county, behind Fulton and Gwinnett counties.

Historically, voters in Cobb County have skewed toward the conservative side, as evidenced by their vote in past election cycles. However, the overall numbers have tended to shift from "red" to "blue" over the most recent election cycles, with the county voting for Hillary Clinton in the 2016 presidential election.

Incumbent Republican Cobb County Commission Chair Mike Boyce was elected four years ago by county voters who were upset with the prior chairman, fellow Republican Tim Lee, and a perceived back-room deal with the Atlanta Braves to construct a new stadium without input from county residents.

After Boyce's victory, then-newly-elected 4th District Commissioner Lisa Cupid regularly criticized Boyce and other commissioners for a lack of attention to the southern part of the county that she represented. Some of Cupid's criticisms indicated that monies were being directed to other parts of the county to the detriment of South Cobb.

With her election, Cupid becomes the first Black woman to ascend to the county's highest office.

Joyette Holmes, a Black woman, was appointed as Cobb County D.A. by Gov. Brian Kemp after the prior D.A., Vic Reynolds, was appointed director of the Georgia Bureau of Investigation in February 2019.

Prior to that, Holmes served as Chief Magistrate of Cobb County. Most recently, Holmes was assigned to lead the prosecution for the high profile Ahmaud Aubery murder case in Glynn County.

Holmes said her office would gather all materials related to the investigation of the death of Aubery.

Aubery was shot and killed on Feb. 23, while family members said he was jogging in Brunswick and caught the attention of a father and son, who claimed they were concerned about burglaries in the area. Months later, following a national public outcry and GBI investigation, 64-year-old Gregory and 34-year-old Travis McMichael were arrested and charged with Aubery's murder.

Long-time Cobb County Sheriff Neil Warren has been under fire following the deaths of at least two people at the Cobb County Adult Detention Center over the past few years.

The order came in response to a lawsuit filed against Warren by 11Alive in September. The lawsuit claimed that the sheriff violated the Georgia Open Records Act by withholding public documents related to inmate deaths by manufacturing a bogus investigation to conceal records.

Files relating to two of those inmate deaths were closed last year.