Within hours of the phone conversation's release, there were calls for a criminal investigation. 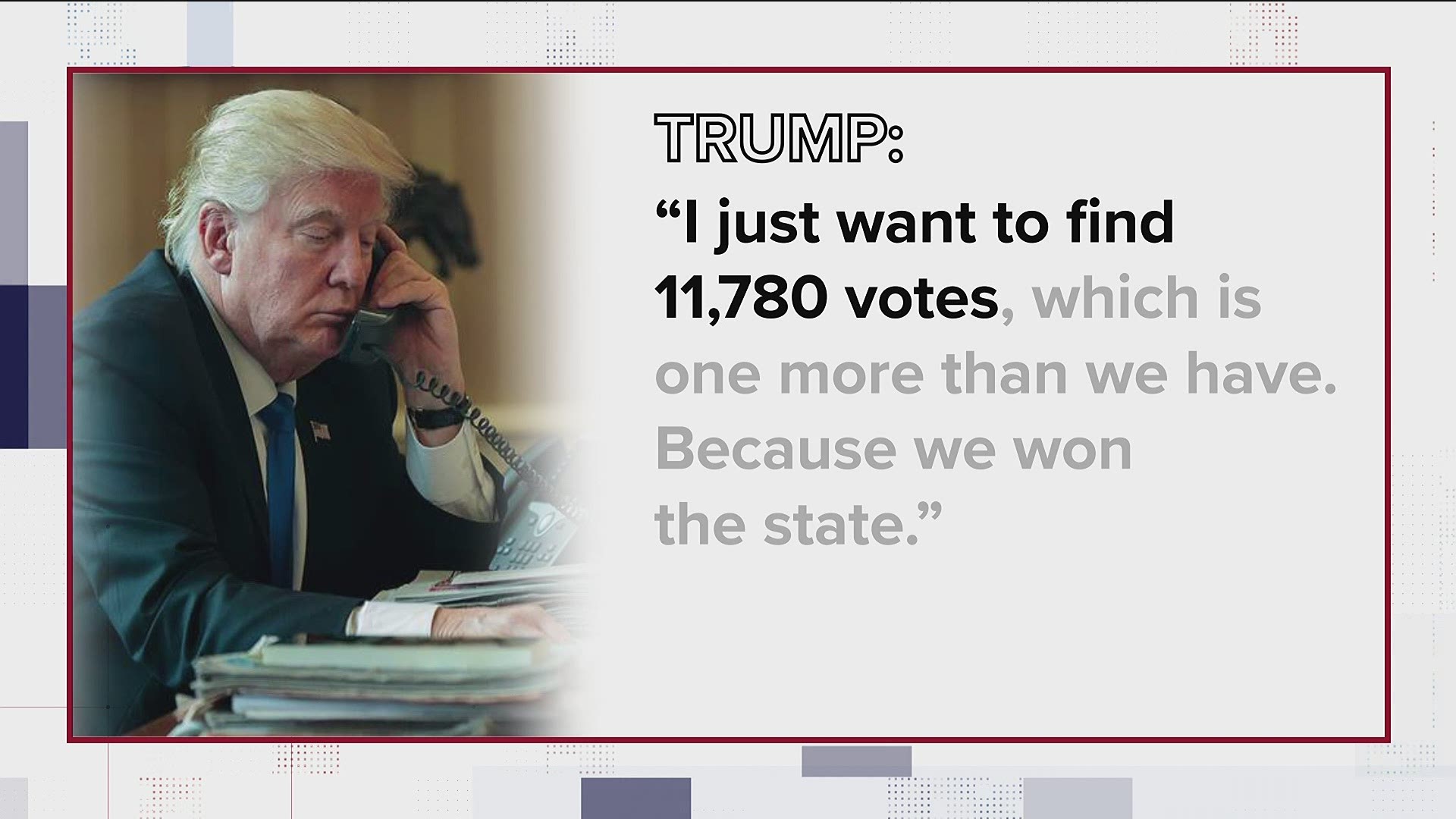 ATLANTA — Calls for an investigation into the phone conversation where President Donald Trump chastised Georgia Secretary of State Brad Raffensperger about the November election continue.

However, Raffensperger said he does not plan to ask his office to criminally investigate Trump’s request to change the outcome of the election.

"I don't think that would be appropriate and not needed at this time," he said.

But that doesn’t stop other agencies from trying.

Trump is heard asking Georgia Secretary of State Brad Raffensperger to “recalculate” and “find” votes for him to win Georgia. In the 62-minute phone recording, Trump made it clear he’s not happy with Georgia’s election results.

Speaking on the call were Trump, White House Chief of Staff Mark Meadows, Trump attorneys Cleta Mitchell and Kurt Hillbert, Raffensperger and Ryan Germany, who oversees the legal functions for the Secretary of State's office.

State Election Board member and attorney David Worley told 11Alive he requested an investigation based on Jan. 2 call. Worley said he read the transcript of the call and sent a letter to the Secretary of State's office.

"To say that I am troubled by President Trump’s attempt to manipulate the votes of Georgians would be an understatement," the letter reads. "I commend you and Ryan Germany for sticking to the state’s position and the plain facts despite the President’s repeated attempts to pressure you into somehow changing the certified votes. It appears that you did so even in the face of threatened criminal action."

Some experts said what Trump did could be considered criminal solicitation of voter fraud, a felony in Georgia.

“I think there is a real plausible case that he did,” said Anthony Kreis, a law professor at Georgia State University during an interview over Zoom Monday morning.

Kreis said soliciting voter fraud is a serious crime, but you have to prove intent.

“The statute says you have to do so intentionally and there is some evidence in the phone call and that president trump actually believed that he won a majority in Georgia by hundreds of thousands of votes,” said Kreis.

Bottom line, it’s not a slam dunk case for a prosecutor. There are three state offices that could investigate to determine whether the president broke the law.

The Secretary of State’s office is one of them, but Raffensperger told 11Alive on Monday he does not plan to ask his sworn offices to do so.

#BREAKING Brad Raffensperger tells me the @GaSecofState office will not launch its own criminal investigation of the Trump call, nor will he ask @GBI_GA or anyone else to investigate @realDonaldTrump. That doesn't stop the DA or other agencies. Video soon @11AliveNews pic.twitter.com/idQsGX8IUx

That leaves the Georgia Attorney General and Fulton County District Attorney, both seated in Atlanta, where the Secretary of State’s office is located.

The Georgia Bureau of Investigation could also investigate, but a constitutional office would have to request it. Georgia’s attorney general and Fulton County’s district attorney do not need permission to investigate.

11Alive reached out to Fulton County District Attorney Fani Willis about the call. In a statement, she said she found the news reports about the call "disturbing."

Below is Willis' statement:

Like many Americans, I have found the news reports about the President’s telephone call with the Georgia Secretary of State disturbing. It is my understanding from news reports that a member of the State Election Board has requested that the Secretary’s Elections Division investigate the call, after which the Board can refer the case to my office and the state Attorney General.

As I promised Fulton County voters last year, as District Attorney, I will enforce the law without fear or favor. Anyone who commits a felony violation of Georgia law in my jurisdiction will be held accountable. Once the investigation is complete, this matter, like all matters, will be handled by our office based on the facts and the law.

RELATED: Sec. of State's office to address public on eve of Senate runoffs, day after call with Trump leaked

“To me, there’s no question the president violated the spirit of the law. Whether he violated the letter of the law, is a different question,” said Kreis.

The chair of Georgia’s Republican party says Raffensperger illegally recorded the phone call. However, he denies he recorded the call at his house.

"Well, I didn't record his phone call," he said. "I just - I had him on speakerphone and my wife was actually there listening to it all but we didn't record anything at our house. But he had plenty of people on that call and so the information's out there in the public domain now."

According to state law and federal law, only one person in a conversation needs to know they’re being recorded.

The secret Trump/Raffensperger recording was released because of the president's false tweet about the Secretary of State. Listen to @GaSecofState tell us that there was no confidentiality stipulation & why any expectation of privacy on the call was shattered by @realDonaldTrump pic.twitter.com/qvNgfjxIoa