The 2020 Election is clearly not the end of the political season. 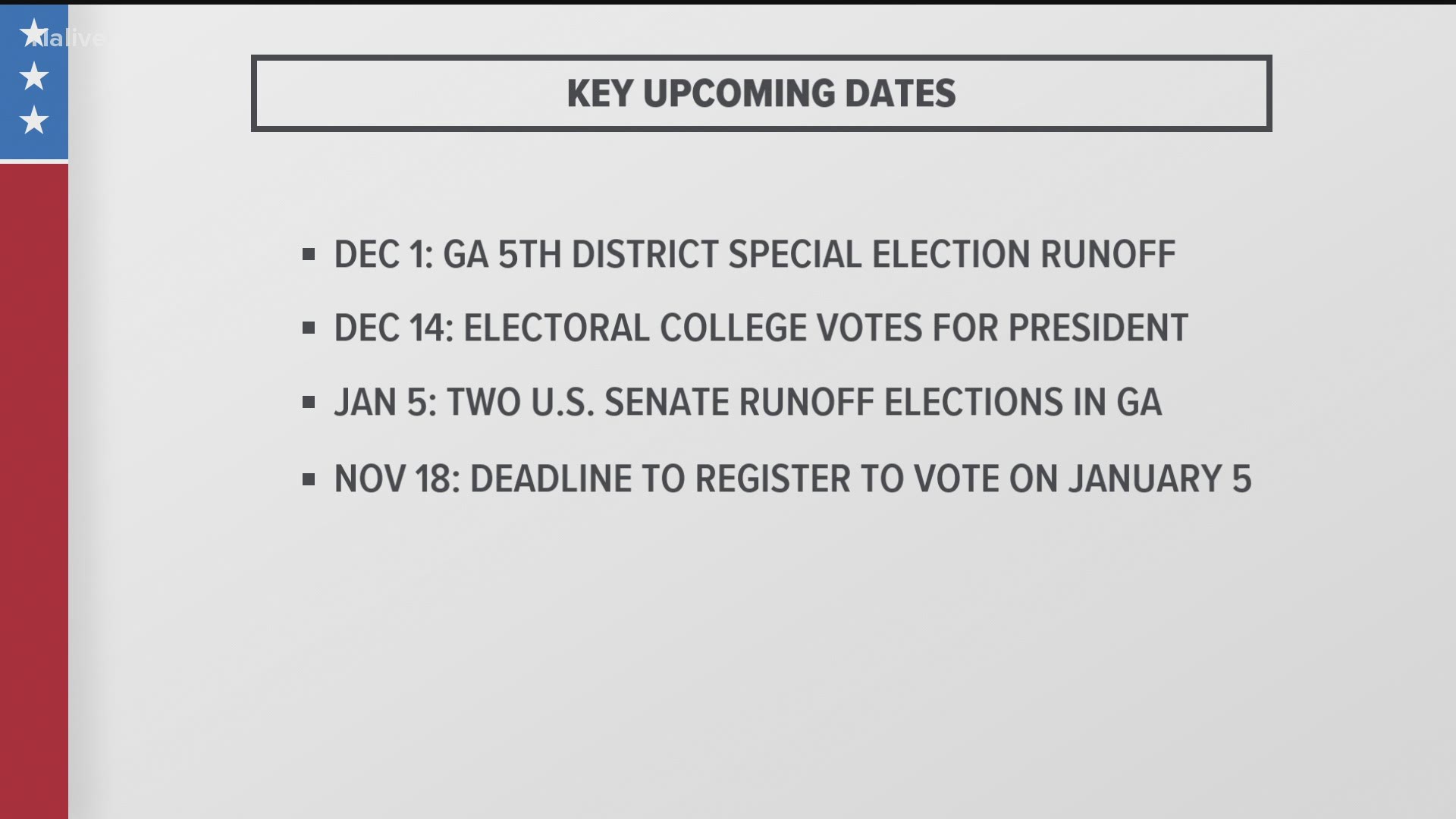 ATLANTA — Although Election Day is in the books, the political calendar is far from over. The season is still very crowded between now and the inauguration of the President of the United States.

While everyone still waits for the determination of who will win the presidency, other actions are moving forward.

Outside of the upcoming Jan. 5 runoff election, many of the upcoming activities are prescribed by various laws, including several amendments to the United States Constitution.

Here are the important dates between now and the presidential inauguration:

Monday, December 14, 2020 - The Electoral College formally meets to cast their votes for president and vice president of the United States. This process was originally laid out in the United States Constitution and has been adjusted through two separate constitutional amendments.

This year, the members of the Electoral College will meet in their individual states on December 14 to cast their votes for President and Vice President.

Each elector must vote by paper ballot separately for President and for Vice President.

RELATED: How many Electoral Votes are needed to be elected president?

After the electors vote, the signed forms must be delivered by registered mail to the Secretary of State of the state in which the electors reside, the Archivist of the United States, the judge of the U.S. District Court of the district where the electors met, and the President of the U.S. Senate.

Wednesday, December 23, 2020 - The certificates used must arrive to each of the officers named above by December 23. Again, this date is set by federal law.

There is one statewide office in Georgia that will also be contested during this runoff -- the 4th District Public Service Commission seat between incumbent Republican Lauren "Bubba" McDonald and Democrat Daniel Blackman. Neither one of those candidates received the requisite 50% plus one vote necessary to secure victory during the general election, which means they will also participate in the runoff election.

Wednesday, January 6, 2021, 1 p.m. - Joint session of Congress to count the Electoral Votes and declare the results of the presidential election. This date is also set in federal law. Vice President Mike Pence, in his role as President of the U.S. Senate, will preside over the joint session.

Pence will open the certificates and present them to one of four tellers -- two from each chamber.  The tellers will list and then transmit them back to Pence.

When one of the tickets receives 270 Electoral Votes, Pence will announce the results to the assembled body, which "shall be deemed a sufficient declaration of the persons, if any, elected President and Vice President."