What happens next in Georgia's tight races?

It's the biggest question on everyone's minds on Wednesday. 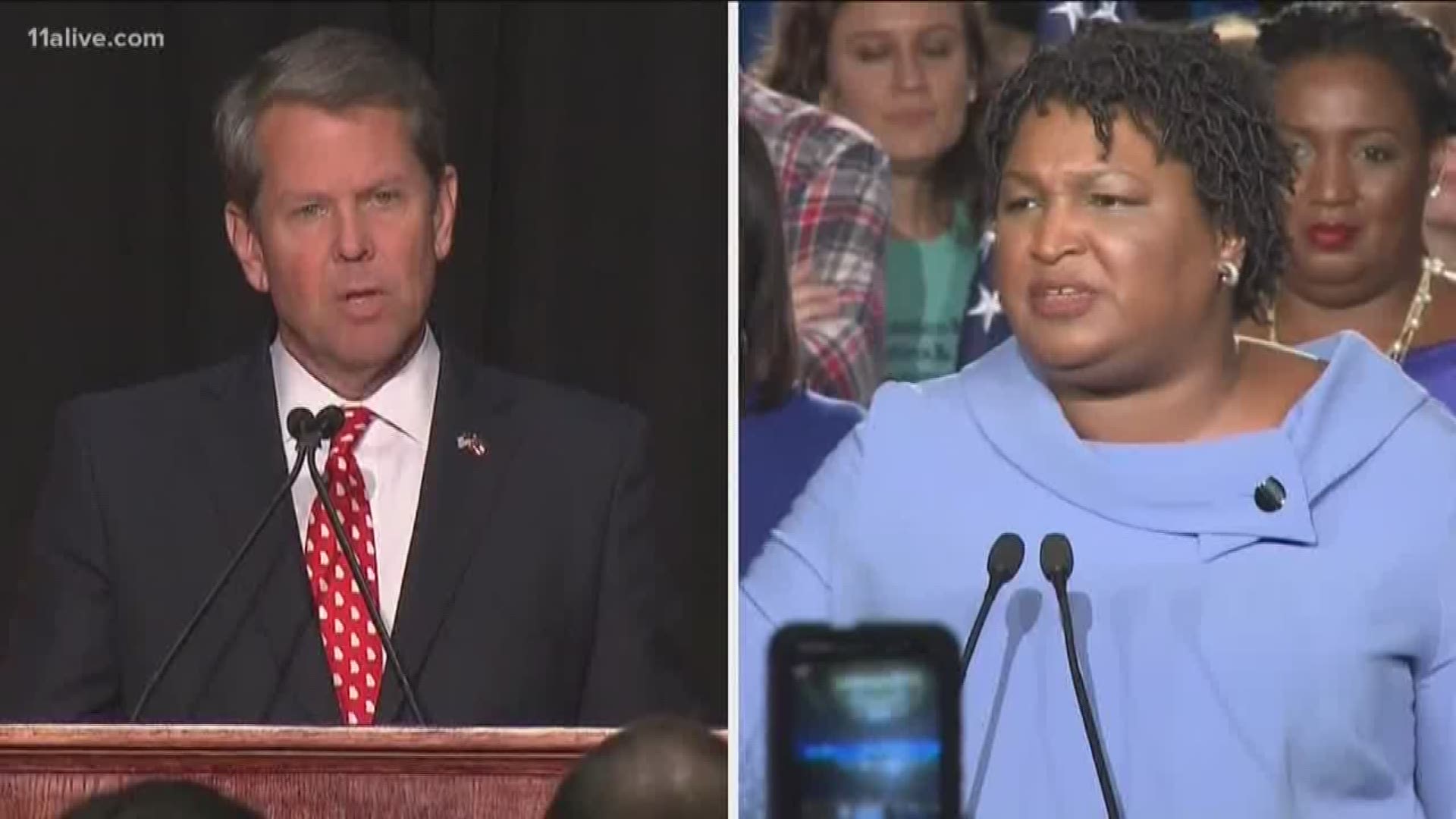 ATLANTA -- While several candidates, including gubernatorial candidate Brian Kemp, have claimed victory, their 'wins' may not be official until Tuesday. The Secretary of State's office still reports 22,000 provisional ballots that need to be counted before votes can be certified that day.

Candidates say they're working to make sure each of those votes get honored. In some cases, a voter showed up at the wrong precinct . Those ballots will be transferred to the correct precinct to be counted. Those that showed up without ID will have three days to prove their identity to election officials.

As of 6pm., with all precincts reporting, Republican Brian Kemp maintained about a 63,000 vote lead over Democratic candidate Stacey Abrams. At this point, that translates to 50.33 percent for Brian Kemp versus 48.72 percent for Stacey Abrams. Libertarian candidate Ted Metz had just under one percentage point or about 37,086 votes.

In Georgia, to be declared a winner of an election, a candidate must receive more than half of all votes cast -- otherwise, a runoff must be held.

Early Wednesday morning, both candidates struck a positive tone while speaking to supporters. Abrams refused to concede, insisting that every vote must be counted, including absentee votes. Kemp also spoke to supporters early Wednesday but stopped short of declaring victory.

"There are votes to be counted but we have a very strong lead," Kemp said. "The math is on our side."

Critics of Kemp have accused him of maintaining a conflict of interest in the race, since he is also Georgia's secretary of state, overseeing the election process. He would also be responsible for maintaining oversight of any recount or a runoff election if that comes to pass.

President Donald Trump was confident enough in Kemp's lead to telephone and congratulate him on a hard-fought win, according to White House spokesperson Sarah Sanders.

Along with Trump, Vice President Mike Pence visited the Peach State to campaign for Kemp during the waning days of the campaign.

On Abrams' side of the ticket, big names including former President Barack Obama, Oprah Winfrey and actor Will Ferrell made stops in the state on her behalf, hoping to lend their energy to the enthusiasm that has permeated Abrams' campaign.

If Abrams wins, she would become the first African American female governor in the history of the United States.

There was only one televised debate between the candidates ahead of the election. A second debate had been scheduled, but it was canceled due to a scheduling conflict with a campaign appearance by President Trump.

How is a recount triggered?

The votes must first be certified -- which would not come until next week. Ordinarily, the secretary of state's office certifies elections during the week following an election. This gives time for absentee ballots to come in and for any paper ballots to be included in the total.

The tabulated electronic votes are stored on memory cards. They would simply be re-uploaded to a server and sent to the secretary of state's office. This process is called recanvassing.

Former DeKalb County Elections Director Maxine Daniels spoke to 11Alive News about the recount process in 2017 in relation to another election.

►RELATED | How would a recount be triggered?

"Generally that never changes," Daniels said. "If that does, that is a story in and of itself."

After that process is complete, the absentee or paper ballots would be rescanned. Daniels said this process would only take a few hours. This is where the result could change slightly.

"The reason why is it is a manual process," she said. "Of course, the machine reads the bubbles. So, if someone lightly bubbled or someone used a pencil, it might pick it up one time and not pick it up the next time or vice versa."

If the winning candidate is elected by more than one percent, a candidate could still request a recount according to Georgia State University Political Science Professor Sean Richey.

"This would be done if they think there is some sort of obvious, egregious error in the way the numbers are counted," Richey said. "Then, they would have to show a judge or other state officials their logic and reasons behind why the doubt the results. Then, if there is corroborating evidence they can show, it is likely a candidate-initiated recount would take place."

Will there be a runoff?

For a victory in an election in Georgia, a candidate must receive at least 50 percent of all votes cast in the election, plus one vote once the election is certified.

If that does not happen, a runoff election is automatically triggered between the top two vote-getters in the election.

In this case, the runoff election would take place on Tuesday, December 4 between Brian Kemp and Stacey Abrams, eliminating Libertarian candidate Ted Metz.

Voters who had registered before the October 9 deadline -- even if they did not vote in the general election on Tuesday -- would be eligible to vote in the runoff election.