Who is Nikema Williams? The instant front-runner to win the seat John Lewis held for nearly 34 years

Williams will run in Atlanta’s heavily Democratic district that has elected a Republican only once since Reconstruction. 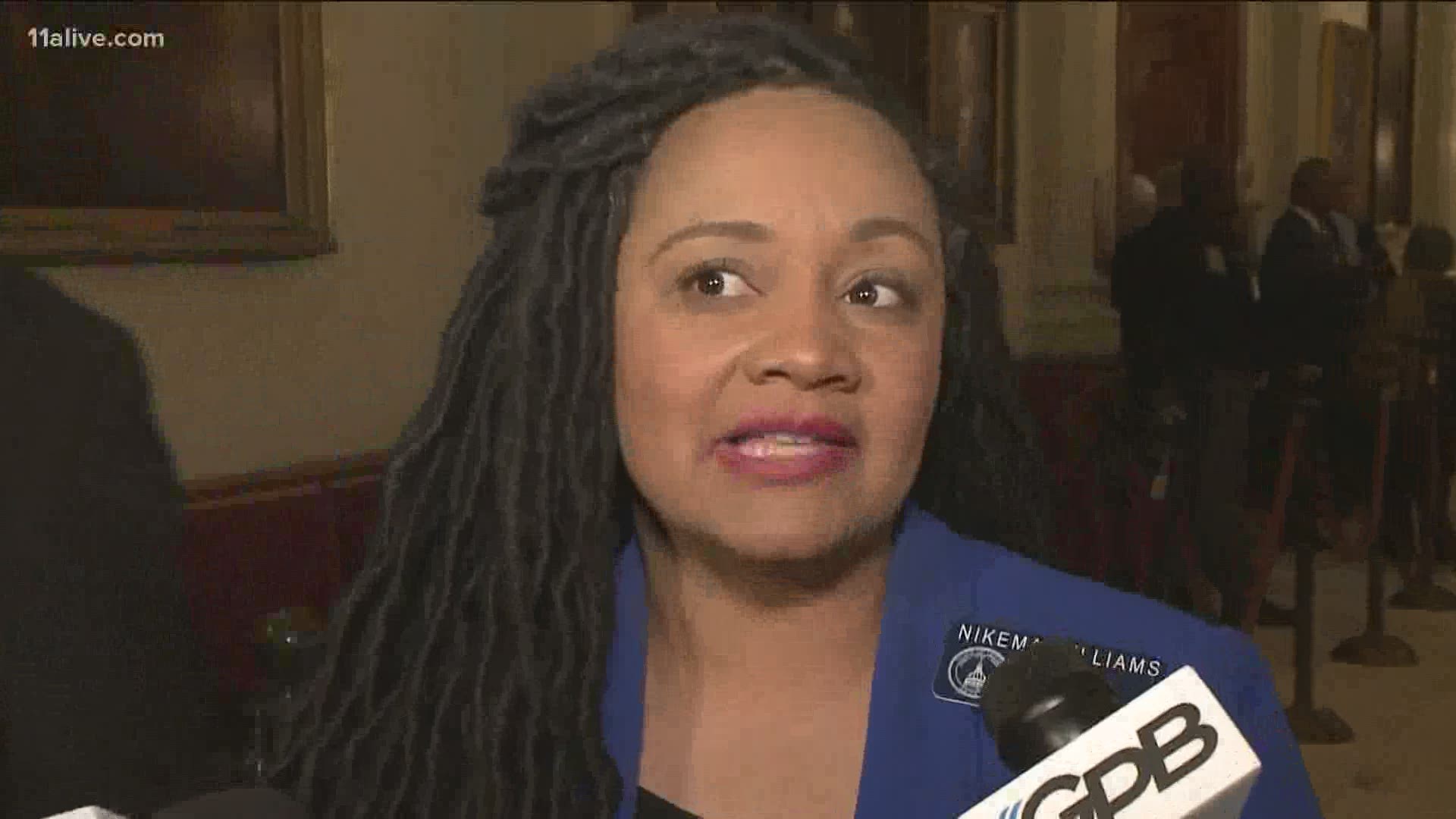 ATLANTA — Georgia’s Democratic party leaders, grieving over the loss of Congressman John Lewis, had to choose by Monday a nominee to replace Lewis on the November ballot - by law, they say.

Senator Williams, who currently represents Atlanta in the Georgia Senate, considers John Lewis to be her personal and political mentor.

And now that Williams is the Democrats’ nominee in this heavily Democratic 5th Congressional District, odds are in her favor to win the seat in November.

Sen. Williams is a self-described disciple of John Lewis.

She speaks with pride of that day in the State Capitol rotunda, in November 2018, when Georgia State Troopers arrested her and more than a dozen others during a peaceful voting-rights demonstration in the week following the midterm elections.

Williams has no doubts, now, that John Lewis would have been willing to risk arrest that day, too.

“She, very much, is following in the tradition of Congressman Lewis,” said Emory University Political Science Professor Dr. Andra Gillespie, calling Williams, “a tireless advocate for women’s rights, and for voting rights … And in many ways, she does represent a new generation of leadership, she’s a Gen-Xer.”

Williams and her husband are parents of a young son and live in Atlanta. Williams was born in Columbus, Georgia, then grew up nearby, in Alabama.

Williams graduated from Talladega College, an HBCU, in Talledega, Alabama, with a B.S. in Biology. She is a member of Alpha Kappa Alpha Sorority.

Williams moved to Atlanta and became a special education teacher in Fulton County.

She is now a union executive, helping organize domestic workers, as deputy director of civic engagement with the National Domestic Workers Alliance (NDWA), and deputy executive director of Care in Action with NDWA.

Williams currently represents, in the legislature, some 174,000 Georgians who live in Senate District 39, which stretches across parts of the U.S. 5th Congressional District, from the north side of the City of Atlanta, south into the cities of East Point, College Park, Union City, and South Fulton.

And, in 2019, Senator Williams was selected as the first-ever Black woman to chair the Democratic Party of Georgia.

Monday, party leaders chose Williams over 130 other applicants to be the nominee for the 5th Congressional District seat that the late John Lewis had held since 1987.

And Williams has fought, in the state legislature, for the types of progressive and liberal causes and issues that Lewis did in Congress, co-sponsoring bills, this year, for example, “to rethink immunity for police officers who are caught in misconduct,” Dr. Gillespie said, and “to make Juneteenth a state holiday … She is one of the leading advocates for repealing stand-your-ground laws in Georgia.”

Williams has fought against the Georgia GOP abortion ban, and against school vouchers. She has fought for protections to voting rights, and for affordable health care for all.

And Williams has taken a lead in her party’s attacks on President Trump and Georgia Governor Brian Kemp, criticizing their responses to the pandemic. She has been working to promote and elect Democrats to local and state offices, trying to turn the state from Red to Blue.

“We need someone who is not afraid to put themselves on the line for their constituents,” Williams told the selection committee just before the committee chose her, “in the same way that Congressman Lewis taught us to. I would be honored if you chose me to be that person … It would be the honor of my life to serve as the voice of the 5th Congressional District.”

The Republican nominee for the seat is Angela Stanton King, who is an enthusiastic supporter of the president and governor, and of conservative causes and issues.

11Alive News, on Monday, tried to reach King for comment, along with the chair of the Georgia Republican Party, David Shafer, to get their views on Williams and on the upcoming election.

Only one Republican, Fletcher Thompson, has ever been elected to Congress from Atlanta since Reconstruction following the Civil War. Thompson served three terms a half-century ago, from 1967 to 1973.