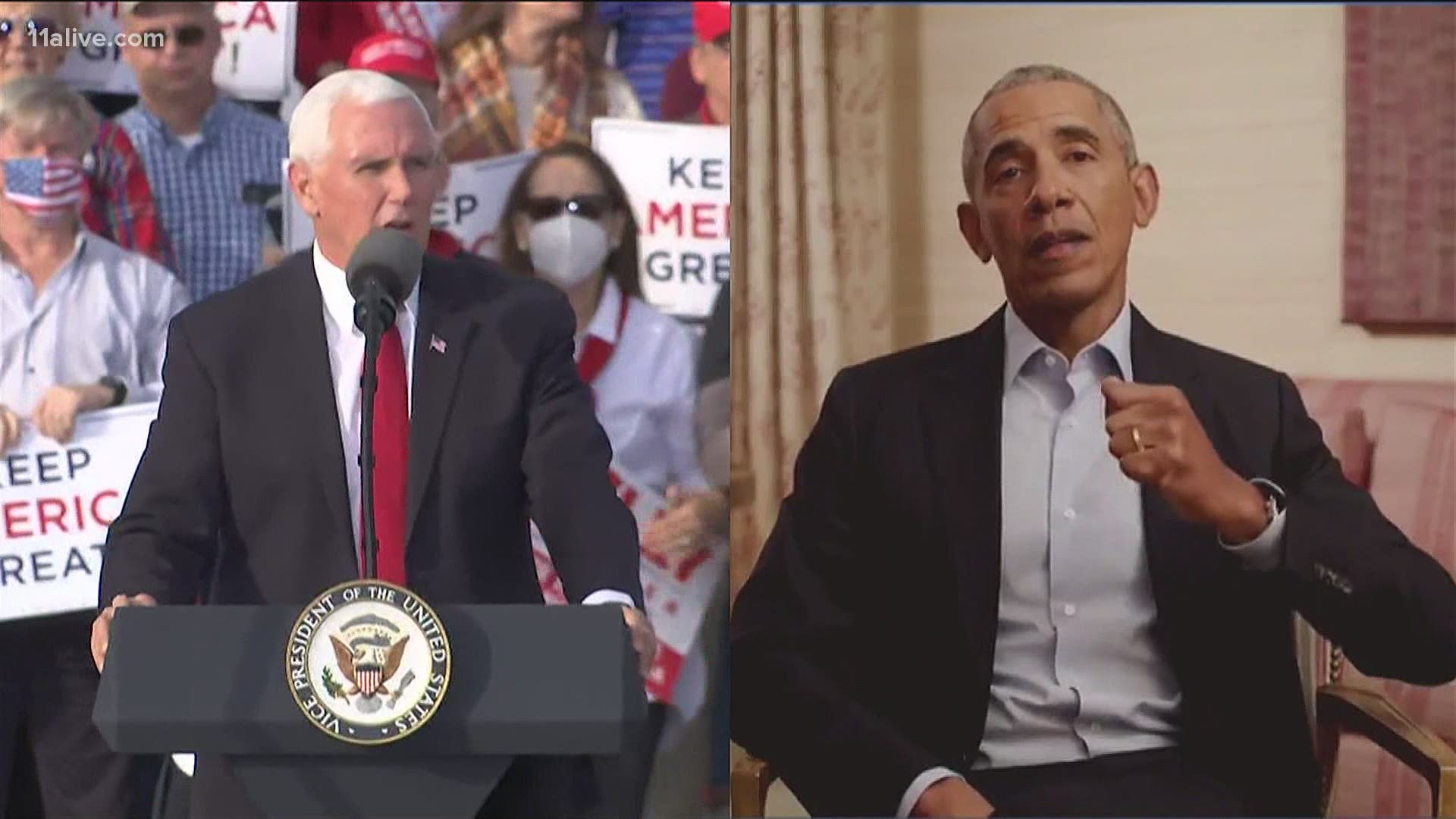 ATLANTA — The U.S. Senate runoff election is just over a month away and control of the Senate is the big prize. Both the Republican and Democratic parties are calling out their top names to make sure voters get the message and get to the polls.

From Savannah on Friday, Vice President Mike Pence spoke to a crowd at a "Defend the Majority" rally.

Meanwhile, Republican Sen. Kelly Loeffler was absent following the death on Friday of a campaign staffer.

At the same time late Friday afternoon, the Democratic Party of Georgia streamed a get out the vote event online.

"I'm here because we stand with Sen. David Perdue and Sen. Kelly Loeffler," Pence told the crowd in Savannah on Friday.

Pence highlighted President Trump's record over the past four years, along with Perdue and Loeffler's records from their time in Washington.

He told the crowd to continue pushing the Republican agenda forward, saying that both senators need to be sent back to U.S. Capitol.

"For all we've done, for all we have yet to do, we need the Peach State to defend the majority," Pence said.

On social media, there have been calls over the last few weeks for Republicans to boycott the upcoming runoff elections.

The calls are coming mostly from the far-right wing and from Republicans who say they no longer trust Georgia's voting system following President Trump's election loss. Pence took the time to respond to those calls.

"I know we've all got our doubts about the last election and I'm actually hearing some people saying just don't vote. My fellow Americans, if you don't vote they win," he said.

"I will do what I can to help in this process, but ultimately this is up to Georgia," Obama said during the Democratic event, while telling Georgia voters the power is ultimately in their own hands.

"The special election in Georgia is going to determine ultimately the course of the Biden presidency," Obama added.

Williams, the chairperson of the Democratic Party of Georgia, said her party delivered a victory, for now, President-elect Joe Biden but added more work is still needed.

Pence focused on convincing fellow Republicans to check their voter registration and then choose to vote early, by absentee or on Election Day, Jan. 5.

Obama said he believes there are still some undecided voters Democrats need to focus on and convince to support Ossoff and Warnock.

"They may be your fellow congregants, a fellow parent at a school, who if you had that conversation with them, I think you may be able to persuade them," Obama said.

Up next for the runoff races, are more visits from top party names and debates.

President Trump is scheduled to be in Valdosta to rally for Perdue and Loeffler on Saturday.

On Sunday, Warnock and Loeffler will debate. Perdue, meanwhile, said he will not participate in any debates during the runoffs, so Ossoff will stand-alone on Sunday and respond to questions from debate moderators.