A Georgia State representative said a man told her to 'go back where you came from' over the weekend in grocery store confrontation. 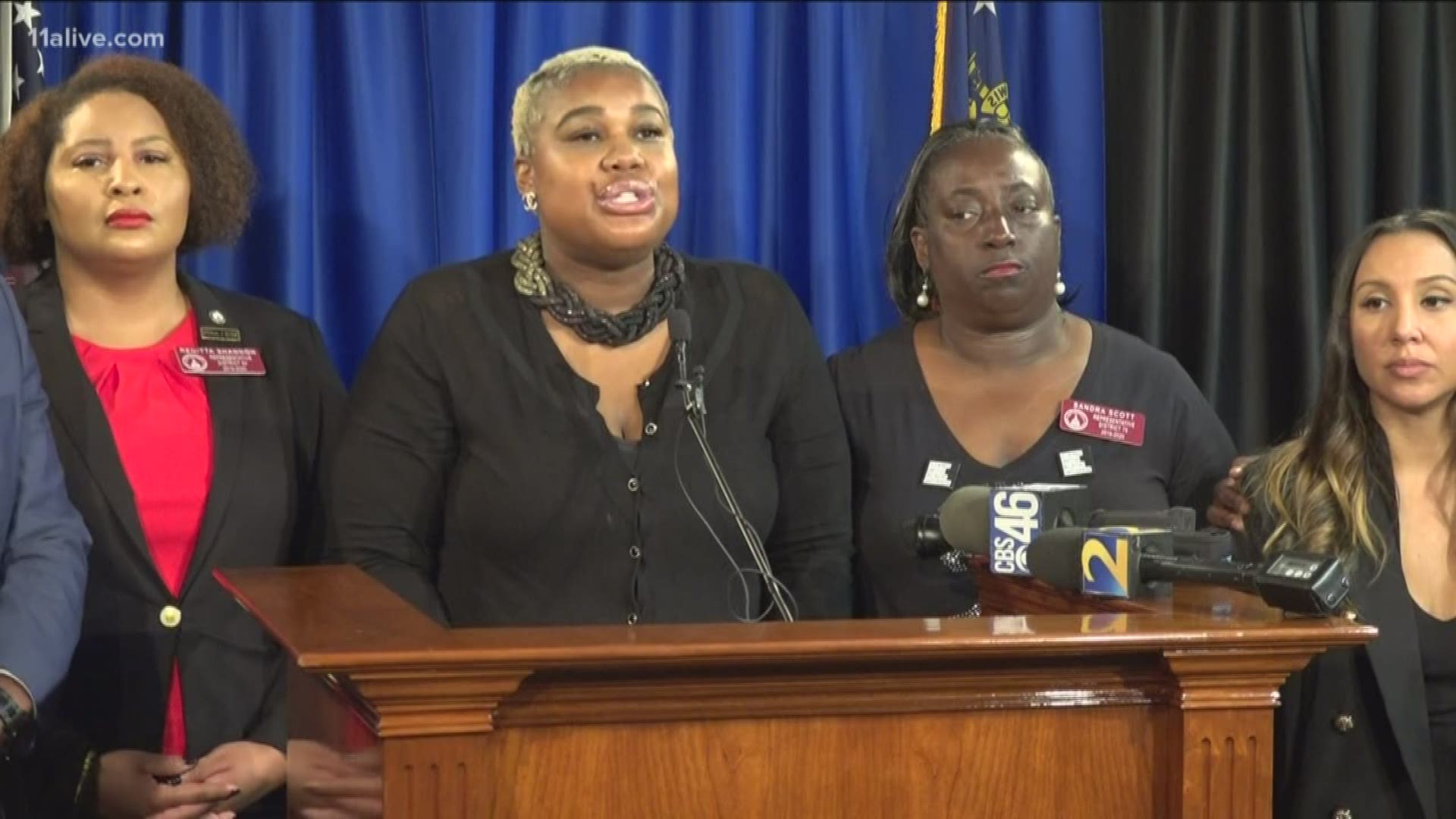 ATLANTA — State Rep. Erica Thomas maintained that a man "made a reference to 'go back where you came from'" in a press conference on Monday following a weekend confrontation at an Atlanta-area grocery store.

The man, Eric Sparkes, has admitted calling Thomas, who is nine months pregnant and was with her 9-year-old child at the store,  a “lazy b****” for using the “10 items or less” checkout line with too many items. He denied using the specific "go back" language.

Thomas, a Democrat from Austell who represents District 39 in the Georgia House of Representatives, said Sparkes approached her at the checkout line and that she was "thrown off guard."

She said he "kept cursing at me, kept berating me" before a Publix employee asked him to leave.

Sparkes said over the weekend he approached Thomas calmly, saying, "Ma'am, not to be rude ... point at the sign, 10 items or less" before it escalated.

Thomas said she was "devastated" that no one who witnessed the altercation was asking her if she was OK or needed help after Sparkes left, and that it left her feeling "embarrassed" and "scared for my life."

"I was scared for my life, because again this man left, came back in just to tell me a piece of his mind," Thomas said. "I don't know what he came back in with, I don't know anything of those things."

Thomas said that police reports and surveillance video would corroborate her account and that witnesses "will testify in court against this man."

PREVIOUS: Georgia lawmaker: Man in grocery store told me to go back where I came from

Cobb County Police released the police report Monday afternoon. It states that on July 19 around 6 p.m. is when they were informed about the incident. The officer spoke with Thomas over the phone and she told police that around 4:30 p.m., Sparkes "approached her in a aggressive and irate manner because she had more than ten items in the express line."

The report said that Thomas told police Sparkes' aggression made her fearful for her safety and the safety of her daughter.

"I interviewed a witness and viewed video of the incident that showed a heated verbal argument," the police report reads. It also indicates that Cobb Police spoke to another witness and Sparkes the next day, saying he denied approaching the state representative aggressively.

Following Sparkes’ denial in a weekend press conference, Thomas said she stood by her previous statements and also said that he shouldn't have called her the expletive in the first place.

Those comments were seized on by conservative media outlets on Sunday, which led to the hashtag #HateHoax trending on Twitter.

Gerald A. Griggs, an attorney and advocate working with Thomas, wrote on Twitter Monday morning that “it’s time for all the facts to come out.”

“At no point should a Black pregnant mother be called a B in front of her child,” Griggs wrote, adding the hashtags #IStandWithErica and “Not A #HateHoax.”

In a brief confrontation in front of 11Alive cameras on Saturday, Rep. Thomas reiterated that she was in the line because she is nine months pregnant.

Sparkes said it didn't matter and that there were other lines empty when she got in it.

Rep. Thomas took to social media crying and describing what allegedly happened at the store.

MORE: Man accused of telling Ga. lawmaker to 'go back' where she came from denies comment

Sparkes  said that her claiming he told her to “go back where she came from” was not true and that she was “playing the victim” for “political purposes.”

“It’s crazy that he says, ‘Oh I said this, but I didn’t say this,’” Thomas said in a video posted by Griggs to Twitter on Monday morning. “At the end of the day the only thing that matters is no one is gonna sit here and believe a man that has the audacity to go up to a pregnant woman and say ‘you lazy S.O.B.’”

“Those are his words. So no one inconvenienced him, he did all of this on his own,” Thomas said. “This is just a mess and I don’t deserve this, no one deserves this.”