Of the 20 cities on Amazon's list of finalists, nine are in states with no anti-gay-discrimination laws, including Atlanta. 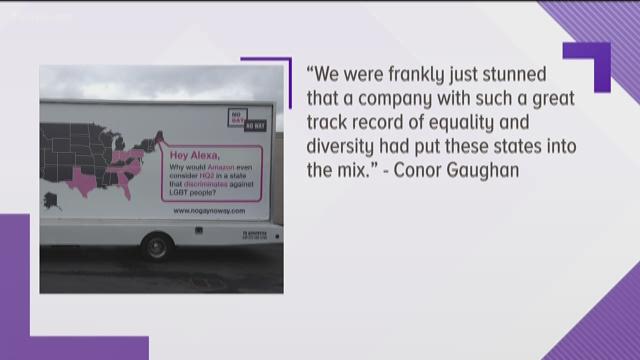 A coalition of national gay-rights advocates launched a campaign Thursday urging Amazon to reject states, including Georgia, that have no laws preventing sexual or gender discrimination when choosing a location for its second global headquarters.

“Georgia is one of only three states that offer no civil rights protections at all, much less for its LGBT community,” said Jeff Graham, executive director of Georgia Equality. “The city of Atlanta is the state’s only municipality with a human rights ordinance that protects against discrimination.”

Of the 20 cities on Amazon’s list of finalists, nine are in states with no anti-gay-discrimination laws, according to the campaign. Besides Atlanta, the other cities are Austin and Dallas; Nashville; Columbus, Ohio; Indianapolis; Miami; Raleigh, N.C.; and the D.C. suburbs of northern Virginia.

Three bills were introduced in last year’s Georgia General Assembly that offered anti-discriminatory measures, one of which, HR 488, would establish a study committee for comprehensive civil rights legislation.

Click on these links to read more about these bills:

Amazon launched a public search for a second headquarters site last year. It asked cities to send in proposals, saying it preferred candidates with a business-friendly environment, a highly educated labor pool, strong transportation options and a good quality of life. The company said it would spend $5 billion building the new headquarters and it expected to hire 50,000 well-paid workers.

That prize needs to go somewhere all workers are welcome, says the ad hoc group launching the campaign.

“We were frankly just stunned that a company with such a great track record of equality and diversity had put all these states into the mix,” said Conor Gaughan, the ad-hoc campaign's manager and communications consultant, told USA TODAY.

The group, which includes the executive director of the National Center for Lesbian Rights and a gay-rights activist and author, plans a demonstration near Amazon’s headquarters in Seattle on Thursday as Amazon prepares to issue its fourth-quarter earnings. It has also hired a plane to fly overhead trailing a "No gay? No way!" banner.

It also plans billboards on trucks driving through Seattle and online ads saying "Hey, Alexa? Why would Amazon even consider HQ2 in a state that discriminates against LGBT people?," according to the organizers, who shared copies of the ads with USA TODAY.

“Georgia has been very clear when it comes to vetoing hostile religious exemption measures that discriminate against the LGBT community,” Graham said. “At the same time, we have great concerns when the legislature returns to those issues again and again.

On Wednesday, SB 375 was introduced, which would allow child-placement agencies to reject referrals from the state based on its religious beliefs.

“We hope Georgia remains in the running for Amazon,” Graham said. “But Amazon has given some indication that it will be considering those locations’ cultures of inclusion and diversity when making their final choice.”