The Georgia GOP Chairman and a group called True The Vote had brought what they said was cell phone data linking individuals with repeated trips to ballot boxes. 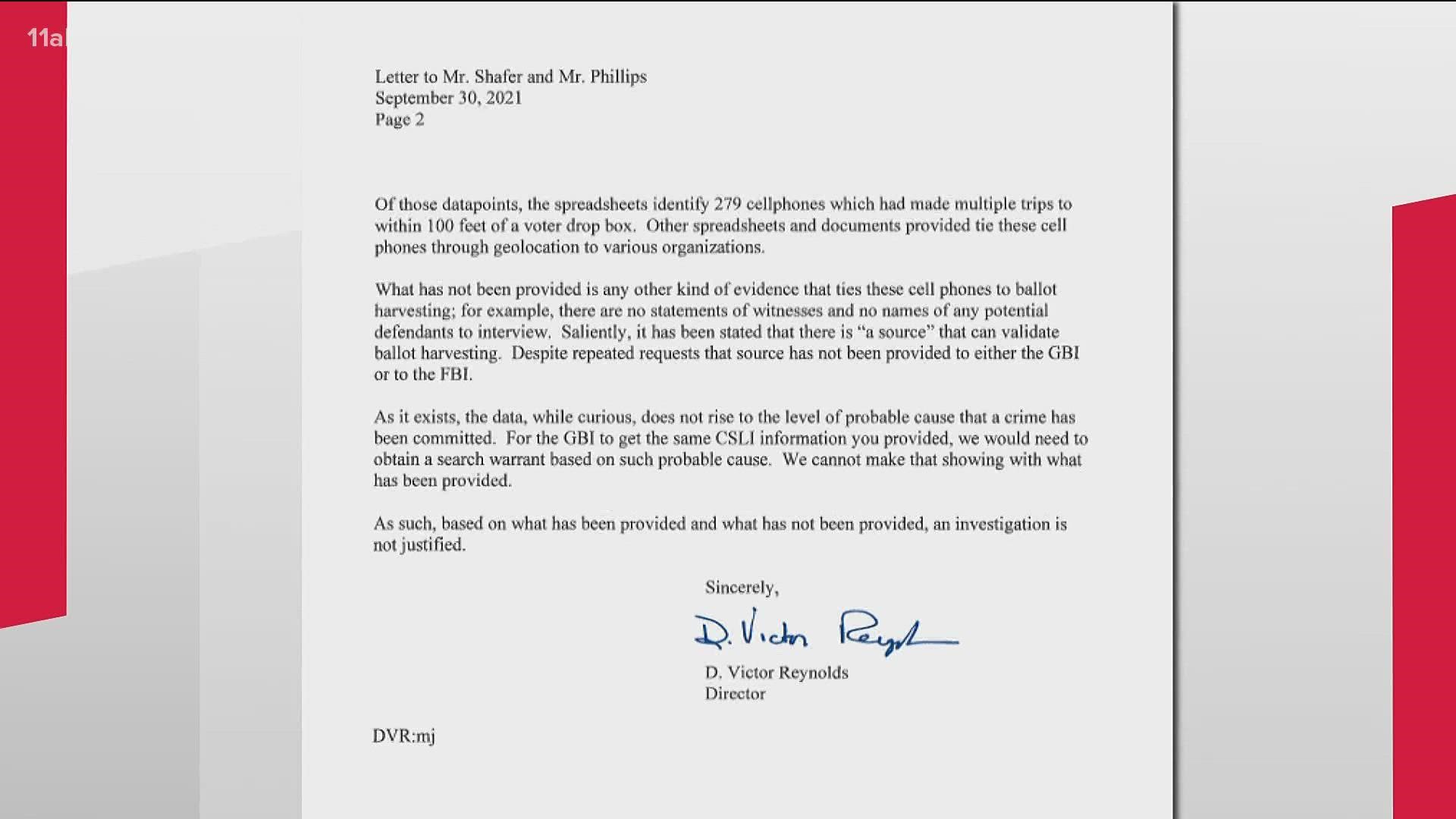 ATLANTA — The director of the Georgia Bureau of Investigation told the state's Republican Party chairman in a letter last month that an investigation was "not justified" after the Georgia GOP and a group, True The Vote, that has pushed fraud claims related to the 2020 election brought what they said was cell phone data linking individuals with repeated trips to ballot boxes.

GBI Director Vic Reynolds said in the letter that he had reviewed their materials with agents, experts and the FBI to "review the entirety of their case file" on the matter.

The director said that beyond the multitude of geolocation data and documents that purportedly could "tie these cell phones... to various organizations," there was not "any other kind of evidence that ties these cell phones to ballot harvesting."

"For example, there are no statements of witnesses and no names of any potential defendants to interview," the letter states. "Saliently, it has been stated that there is a 'source' that can validate ballot harvesting. Despite repeated requests that source has not been provided to either the GBI or to the FBI."

According to Reynolds' letter, Georgia GOP Chairman David Shafer and True The Vote provided the GBI with "25 terabytes of information representing 1.2 trillion mobile signals" which identified 279 cell phones in Georgia that had "made multiple trips to within 100 feet of a voter drop box."

"As it exists, the data, while curious, does not rise to the level of probable cause that a crime has been committed," Reynolds wrote. "For the GBI to get the same (cell phone geolocation) information you provided, we would need to obtain a search warrant based on such probable cause."

"We cannot make that showing with what has been provided," the director added.

He concluded based on what Shafer and True The Vote provided that "an investigation is not justified."

"Ballot harvesting," or the practice of collecting mail-in ballots from voters and submitting them at drop boxes in a mass dump, is outlawed in Georgia.

The bill H.B. 316 passed in 2019 by the Georgia General Assembly and signed by Gov. Brian Kemp in April that year made a number of changes to state election law, among them specifically regulating against the "harvesting" practice.

It changed the law to specify that either the voter "personally mail" the ballot or have it delivered by "the elector's mother, father, grandparent, aunt, uncle, brother, sister, spouse, son, daughter, niece, nephew, grandchild, son-in-law, daughter-in-law, mother-in-law, father-in-law, brother-in-law, sister-in-law or an individual residing in the household of such elector."

If someone does not meet those criteria, and they try to submit a mail a ballot on behalf of someone, they're in violation of Georgia law and subject to punishment.