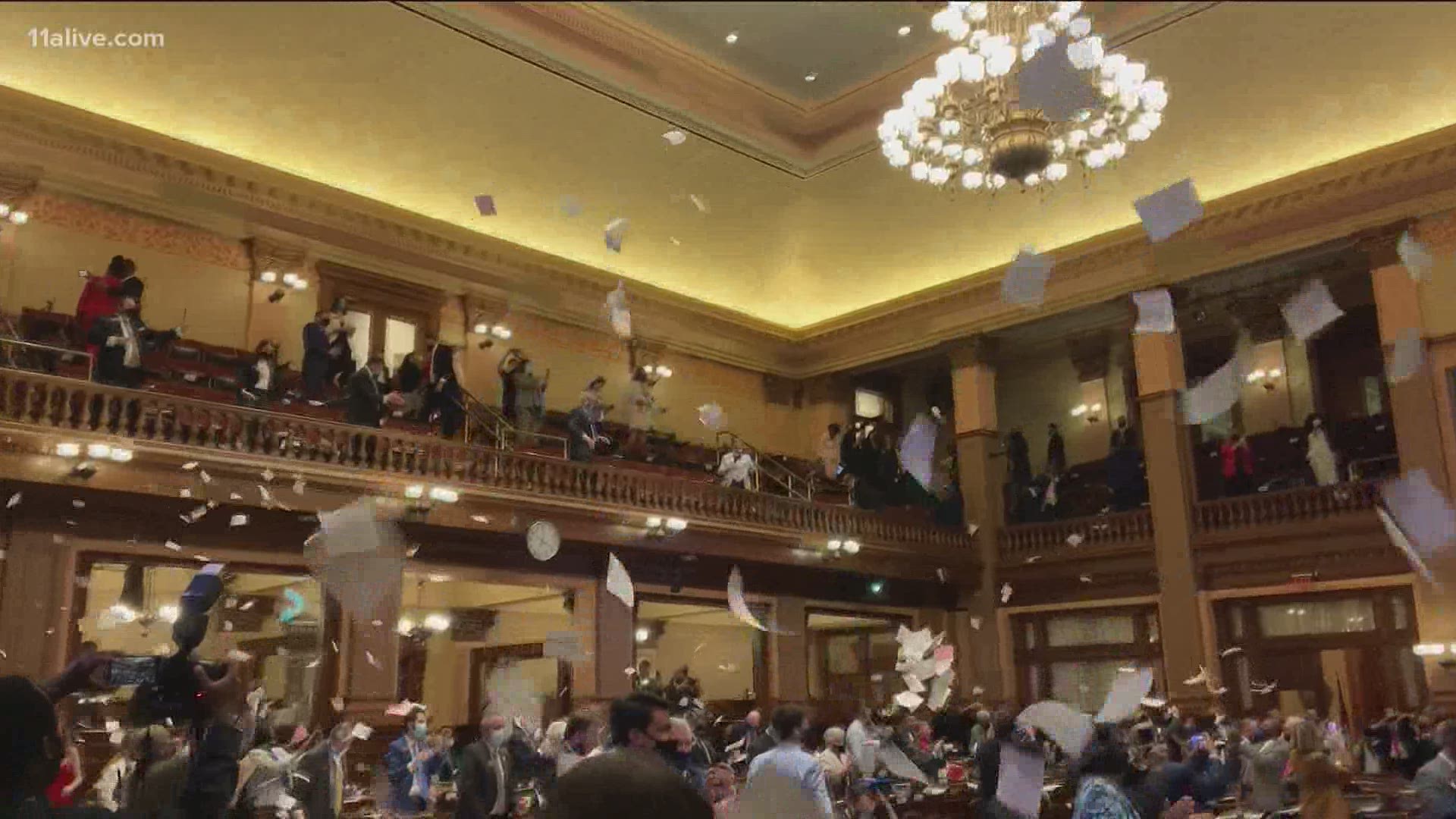 ATLANTA — Georgia lawmakers exited noisily into the night a little after midnight Wednesday.

The Senate and House did it with the traditional blizzard of paper – the release of forty days worth of work that will mostly go dormant until January 2022.

Before they left, lawmakers passed a Republican bill that would prevent local governments from making steep cuts in police budgets.  They also passed a bipartisan bill that would repeal Georgia’s citizen’s arrest law – first enacted in 1863.

"It makes clear that deadly force is not a force that can be used in these matters of defending property," state Rep. Bert Reeves (R-Marietta) told the House before passage.

Reeves acknowledged that the law, enacted in 1863 was written by a man who became a founding member of the Ku Klux Klan. He added that Georgia will be the first state in the nation to repeal its citizen arrest law enacted in that era.

The citizen's arrest law was spotlighted by the racially charged killing of Ahmaud Arbery, a Black jogger, in Glynn County last year.

Gov. Brian Kemp has indicated he will sign the repeal of the citizen's arrest law.

Lawmakers in the Senate took more than an hour out of a whirlwind day to pass a "granny-cam" bill that ultimately failed to become law.

The measure is designed to allow surveillance cameras in senior living facilities.

Yet critics said that because the bill outlawed hidden cameras, it actually failed to protect seniors from staffers doing them harm.

The House had passed the bill, but Wednesday the Senate changed it. And shortly before the legislature adjourned for the year, the House voted against the amended measure, killing the bill for this year.

One unexpected measure sought to punish Delta Air Lines on this final day of the legislature.

Delta’s president, Ed Bastian, made some statements that were critical of Georgia’s new voting bill passed by the legislature over the objections of Democrats and signed by Gov. Kemp last week.

State House Republicans, under Ralston’s leadership, passed a repeal of a jet fuel tax break worth millions of dollars to Delta Air Lines.

“You don’t feed a dog that bites your hand. You’ve got to keep that in mind sometimes,” Ralston said when asked about the retaliatory legislation, which passed the House but never got a vote in the state Senate before adjournment.

Republican majorities also gave final passage to a measure that would disallow local governments from slashing their police budgets.

They also passed a bill that would add a program training young drivers how to interact with police. Although the measure easily passed the Senate, House Democrats balked at the bill, saying it puts the onus of safety during such encounters on the motorist rather than the police officer.

One Republican backer said it was "a good commonsense piece of legislation that got turned into ... a political football."