Here's the latest on political developments in Georgia. 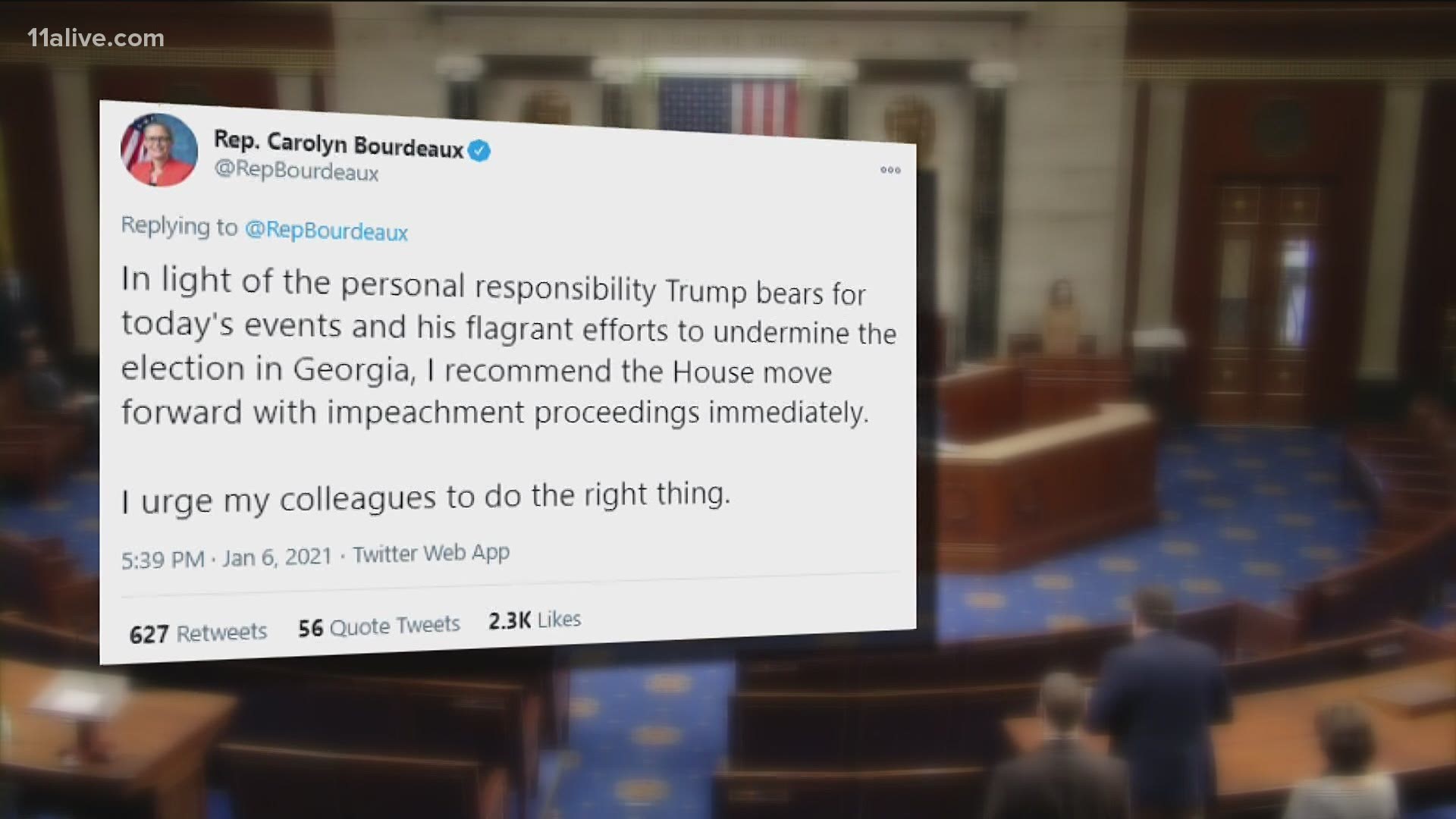 ATLANTA — Vice President Mike Pence formally announced Tuesday he would not be granting a request by the House to invoke the 25th Amendment to the Constitution to declare the president unable to serve.

RELATED: GBI says it will 'do what is necessary' to keep security amid reports of nationwide capitol protests

There is effectively no chance impeachment would result in Trump's removal from office, with even top House Democrats suggesting a Senate trial could be put off months into Biden's presidency.

The president, meanwhile, was set to travel to Texas Tuesday to highlight his border wall efforts, part of a defiant defense of his record in the last days of his administration. That itself comes as the FBI warned of possible continuing protests across the country against the transition of power.

Meanwhile in Georgia, work to complete last week's Senate runoff races continue, with counties slowly finishing things up and certifying results. So far, according to the secretary of state's website, just shy of half of the state's 159 counties have certified the Senate results. That figure was according to the  7 p.m. update from the evening before. The counties have until Friday to certify.

Once the results are certified by the counties, and the state certifies the total results, Senators-elect Rev. Raphael Warnock and Jon Ossoff can be sworn in.

11Alive tracked updates they came in Tuesday. Please note all times below are Eastern.

12:10 p.m. | Some news from down Savannah way: An elections board member in Chatham County has resigned after "bumping an off-duty poll worker with her car" according to the Associated Press.

A coastal Georgia elections board member twice censured by fellow board members has resigned. Chatham County Board of Elections member Debbie Rauers announced her resignation Thursday. She's accused of bumping an off-duty poll worker with her car at a Savannah polling place last Tuesday. Chatham County Republican Party Chairman Don Hodges says Rauers has been planning to resign since December. The party is reviewing applications to replace Rauers on the board. A police report says a woman matching Rauers’ description tried to park her car in a spot that another woman was saving for a food truck. The report says the driver “angrily jerked her car forward,” bumping the other woman’s legs. The other woman wasn't injured.

8:00 a.m. | There is one early development this morning that highlights the continuing fallout from President Trump's extended campaign to overturn the 2020 election results.

Atlanta attorney Lin Wood, who has become one of Trump's most notorious supporters through his peddling of wild conspiracies and increasingly extreme denunciations of those he deems insufficiently loyal to the president  - including suggesting Vice President Pence should be executed - has been removed from a case in Delaware by a judge due to his "toxic stew of mendacity, prevarication, and surprising incompetence," Jan Wolfe of Reuters reports.