She knows it has little chance of passing, but she's trying to make a point. 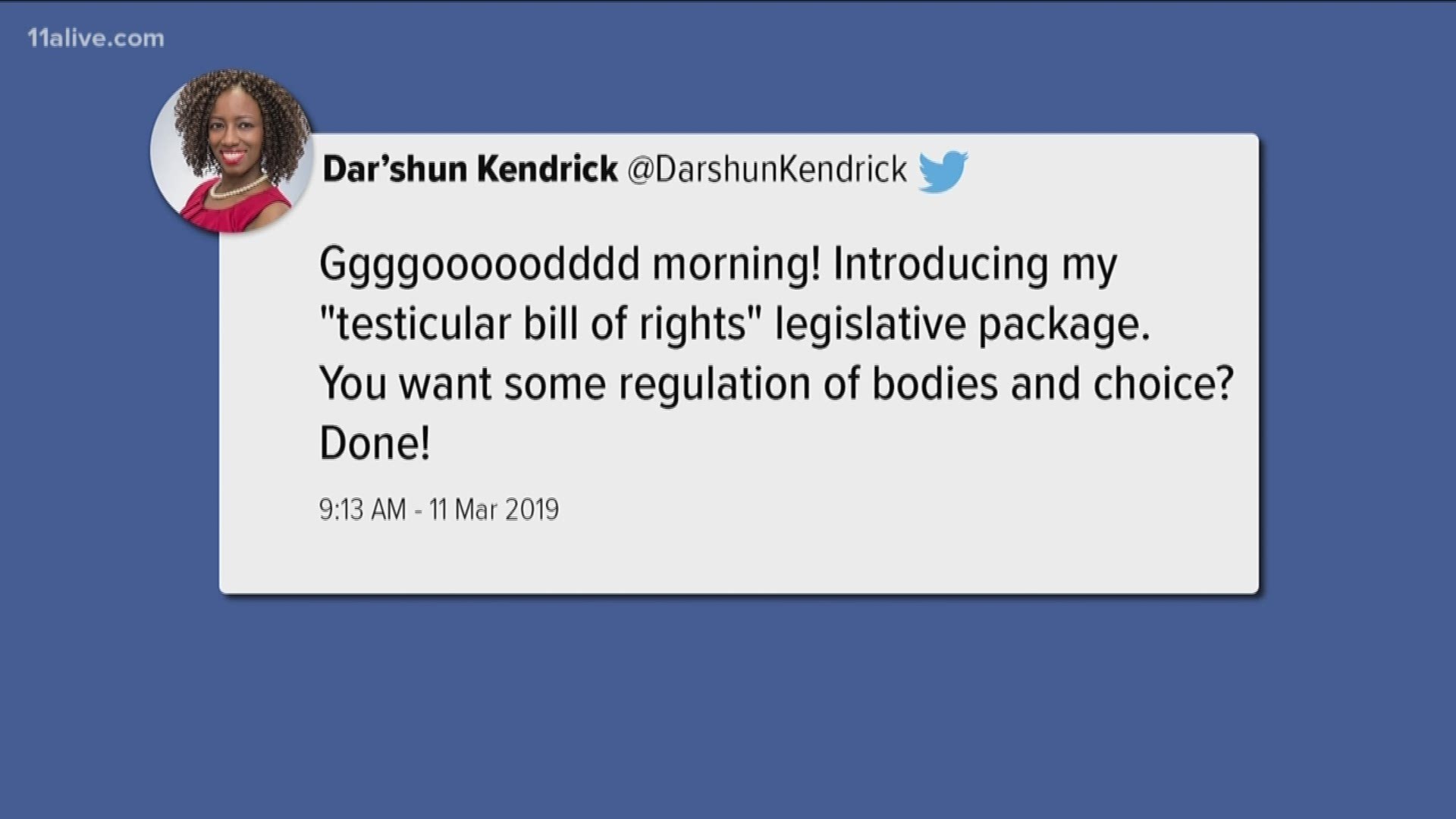 ATLANTA — After Georgia's House passed a controversial "heartbeat" abortion bill, a representative from Lithonia is proposing legislation that would seek to regulate a man's reproductive rights.

Rep. Dar'Shun Kendrick (D-Lithonia) tweeted out a screenshot Monday of an email to legislative staff introducing her "testicular bill of rights" legislative package.

"You want some regulation of bodies and choice," she tweeted. "Done!"

The email requests staff to have the legislation drafted. In an interview with the Rolling Stone, she said she fully expects the draft to be on her desk by the end of the week.

According to the email, the bill would seek to:

Kendrick told Rolling Stone she's aware that her measure has little chance of passing (it's already past the deadline for submitting new legislation), but she said it is mean to call attention to the "absurd" double standard women are being held to.

"Some people BIG mad but guess what," she tweeted, Monday. "I have the support of my constituents and they are all that matter."

As anticipated, the proposed legislation has caused a stir online, with Kendrick noting, "I have had more interviews TODAY about my 'testicular bill of rights' than interviews I have had the last FULL term I have served. Mission accomplished to keep the conversation going about #NoToHB481!"

11Alive is where Atlanta speaks. What do you think of the proposed legislation?

The Georgia House passed HB 841, the controversial legislation on abortion, Thursday night with a vote of 93-73. The bill, put forth by Rep. Josh Bonner (R - Fayetteville), would ban any abortions after a fetal heartbeat is detectable - usually about six weeks into a pregnancy. That cutoff, however, can sometimes be before a woman even realizes that she's pregnant. Georgia's current law allows for abortions up to 20 weeks.

It prompted swift condemnation from abortion-rights activists and a Monday protest outside the State Capitol from women dressed as characters from "The Handmaid's Tale" holding coat hangers (a grim nod to a crude tool women sometimes used before abortion became an accepted medial procedure).

Pro-life supporters, however, applauded the passage of HB 481, and said it was long overdue. Gov. Brian Kemp has already said he supports the legislation.

"I can't account for what people will do and how they'll do it," Virginia Galloway said, when asked about the use of coat hangers prior to the Roe v. Wade legalization in the US. "I just know that the right thing to do is not for the state to be okaying this practice. It's a barbaric practice that never should have happened in the United States of America."

Abortion rights activists fear that the momentum at the Capitol has turned against them. A senate committee hearing is likely later this month.