The House Speaker said the representative had refused to be tested at any point during this legislative session. 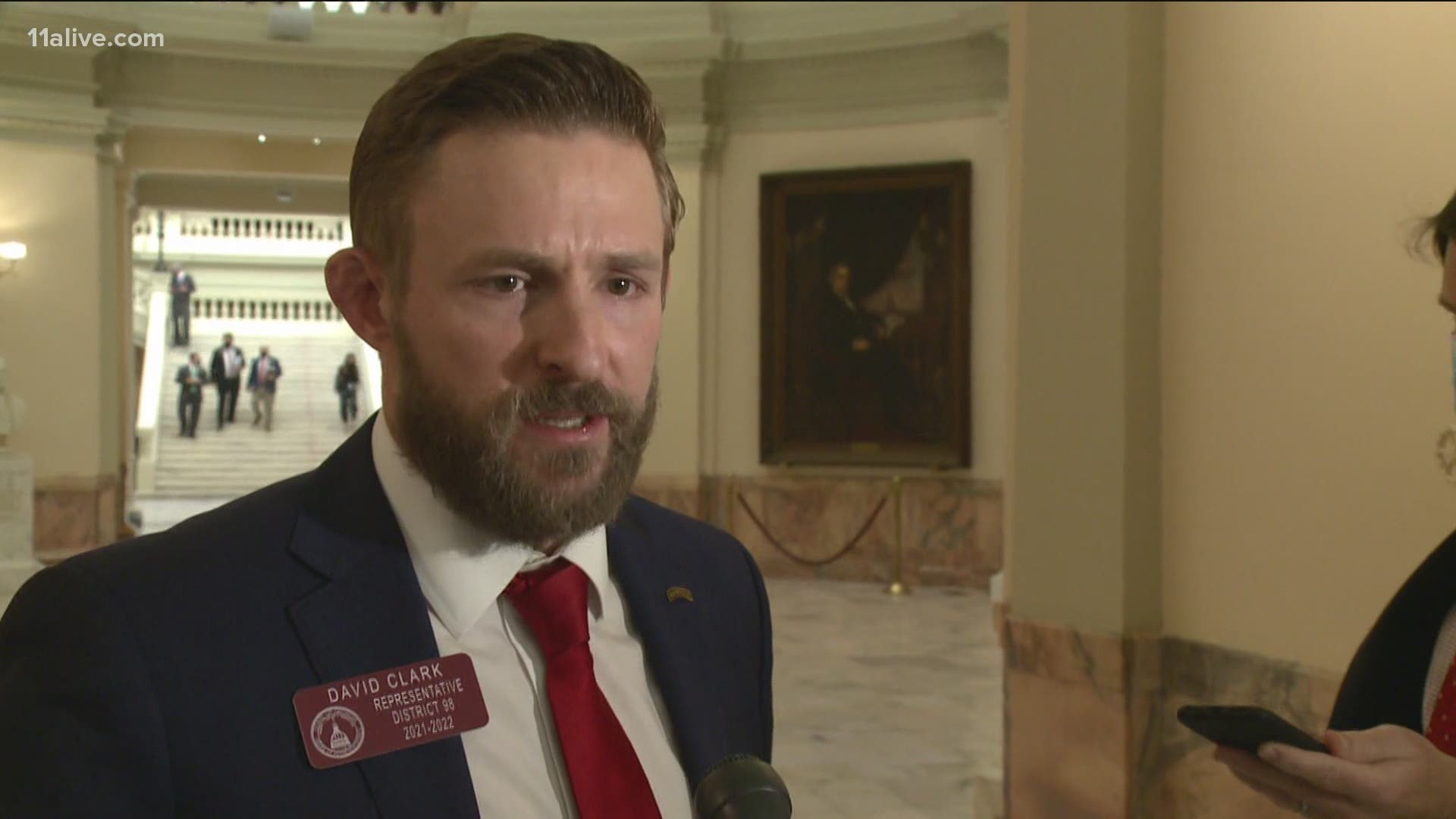 ATLANTA — A Georgia state legislator was removed from the House chamber on Tuesday for not getting tested for COVID-19.

Rep. David Clark, a Republican who represents Gwinnett County out of Buford, said he was thrown out by House Speaker Rep. David Ralston, a fellow Republican, for not taking the test, which is required of state lawmakers.

Ralston's office says Clark is the only House member who has refused to be tested since the legislative session began two weeks ago. There are 179 House members; one seat is vacant.

Two years ago, Clark was among a handful of Republicans who called for Ralston to step down as Speaker.  Since then, Ralston stripped Clark of a chairmanship and relocated his office to a remote suite on the sixth floor of a building across from the capitol.

Two weeks ago, Clark was the only Republican to vote against Ralston when he was elected Speaker for the 2021-22 legislative session.

The testing issue has been a charged one since the start of the Georgia General Assembly session earlier this month. House guidelines call for two tests a week during the 2021 session. A testing site is open at the Capitol for lawmakers Monday through Thursday.

Speaker Ralston admonished the House members on the first day of the session after he said 74 members refused to test.

On Tuesday, Rep. Clark framed his issue with the testing as it being excessive for lawmakers to get tested twice weekly when such testing isn't as readily available for others.

Clark says he won’t get tested because first responders, healthcare workers, teachers and the elderly need to get tested more than him. @11AliveNews pic.twitter.com/CQQf5o3ke3

Georgia health officials say anybody in the state who needs a COVID test can get one.

Speaker Ralston, in a statement, said Clark "had refused to be tested at any point during this session."

The statement said Ralston "asked that member to leave the House Chamber until such time as he/she complies with the testing policy. The member refused to leave of his/her own accord."

The statement added that the representative was then escorted out by a member of Capitol Police.

"The member will be allowed to return upon complying with the policy for the safety of all those who have to come to the Capitol," it said.

Clark said he had tried to work out his objection with leadership quietly.

Ralston's statement noted that the policy "is about preventing the spread of a disease that has killed more than 12,000 Georgians."

Asked about the episode, Gov. Brian Kemp said, "I think it's incumbent on everyone in the building, whether you're a legislator, whether you're working in the executive branch, member of the media, the general public, we all need to follow the guidance and best practices to keep you safe, but also to keep others safe from you, if you happen to be infected and you're asymptomatic and for some reason that hasn't been caught."

The governor said he and his wife, the first lady Marty Kemp, follow a weekly testing program.

"I know that Speaker Ralston and the House leadership has worked with their members and worked with Dr. Toomey's team to set up protocols for how we could keep this building safe during this session, so we didn't have to go into a suspension so we could get the people's work done," the governor said.