Georgia was represented Wednesday on-stage at Joe Biden and Kamala Harris' inauguration. The Peach State will also be represented in their administration. 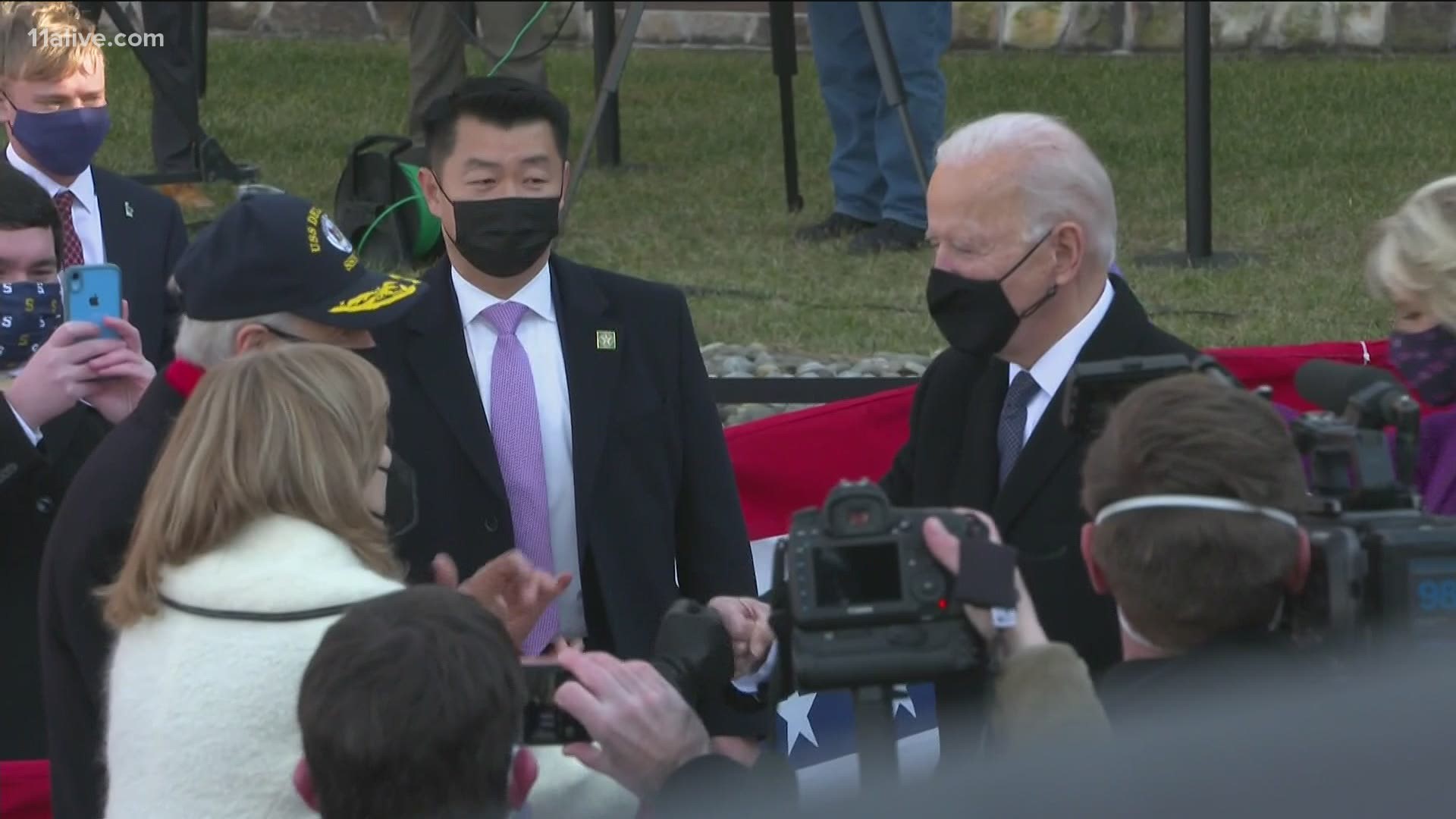 ATLANTA — Georgia was well represented on-stage Wednesday at the inauguration of Joe Biden and Kamala Harris.

The Peach State will also be represented throughout the Biden-Harris Administration.

To help us break down some of those Georgia ties, we reached out to Joseph Watson, Jr. Watson is the inaugural Carolyn Caudell Tieger Professor of Public Affairs Communications at UGA's Grady Collge of Journalism. Previously, Watson was an appointee in President George W. Bush's administration.

He says having people in the administration who recognize the importance of Georgia's agriculture, airport and large corporations is important.

"Having those from a particular state can ensure that issues that matter to our state are reflected and known by the individuals that serve to execute laws within the executive branch," he said. "All those kinds of resources, wherever they are in government, is of valuable importance to the state."

Here's a list of local ties to the current administration with their titles.

She served as Minnesota Communications Director for the Biden-Harris Campaign.

Prior to her role with the campaign, she served as Communications Director in the Office of US Rep. Maxine Waters (D-Calif.). Previously, she was a Press Assistant at Third Way and a Client Executive in the Public Affairs and Crisis practice of Burson-Marsteller (now BCW-Global).

Originally from Atlanta, GA, Dorsey-Craig is an alumna of Howard University and a member of Delta Sigma Theta Sorority, Inc. She resides in Washington, D.C. with her husband.

Prior to his role on the campaign, he was a freelance photographer based in New York, covered political campaigns including Conor Lamb's Special Election in 2018, was a photographer on Hillary Clinton's 2016 campaign and worked for The Clinton Foundation in New York from 2007 until 2013. Born and raised in Atlanta, Georgia, Schultz is a graduate of Georgia State University.

"Journalists serve a very important role in terms of documenting visually what happens in the White House," said Watson, Jr. "We remember images more than we remember words in large measure. That's a role that's more important than you might think in passing because it helps to shape public perceptions of the administration".

Stefanie Feldman has worked for President-elect Biden for most of the past decade, most recently serving as the National Policy Director for the Biden-Harris Campaign.

She previously worked as the inaugural Policy Director for the Biden Institute at the University of Delaware's Joseph R. Biden School of Public Policy & Administration. Prior to her role at the university, she served at the White House for five years, ultimately serving as Vice President Biden's Deputy Director for Domestic and Economic Policy.

Originally from Georgia, she holds a J.D. from Yale Law School and a B.A. in Public Policy Studies from Duke University.

According to Professor Watson, Jr., her current title makes her responsible for coordinating domestic policy across different executive branch agencies that impact the U.S. domestically.

"Everything from the Department of Energy to Housing and Urban Development to Health and Human Services," he explained.

Jahi Wise served as a policy volunteer on the Biden-Harris Campaign.

Wise was Policy Director for the Coalition for Green Capital (CGC), an organization dedicated to accelerating investment in clean energy and climate infrastructure.

Previously, Wise was a project finance associate in the Energy and Infrastructure Projects Group at Skadden, Arps, Slate, Meagher & Flom LLP. Before law school, Wise worked in economic development as a community organizer and AmeriCorps VISTA in Washington, DC.

Born in Georgia and raised in Maryland, Wise is a graduate of Morehouse College, Yale School of Management, and Yale Law School. He lives in Washington, DC with his wife.

Sameera Fazili is the Economic Agency lead on the Biden-Harris Transition.

Prior to her role she was at the Federal Reserve Bank of Atlanta where she served as the Director of Engagement for Community and Economic Development.

In the Obama-Biden Administration, Fazili served as a senior policy advisor on the White House's National Economic Council and as a senior advisor at the U.S. Treasury Department in both Domestic Finance and International Affairs. Prior to that she was a clinical lecturer of law at Yale Law School.

Originally from Buffalo, she now lives in Georgia with her husband and three children. Fazili is a graduate of Yale Law School and Harvard College.

Dr. Elizabeth Sherwood-Randall is a Distinguished Professor at the Georgia Institute of Technology and a Senior Fellow at Harvard Kennedy School's Belfer Center for Science and International Affairs.

From 2014-2017, Dr. Sherwood-Randall served as Deputy Secretary at the U.S. Department of Energy.

Earlier in the Obama administration, she served as White House Coordinator for Defense Policy, Countering Weapons of Mass Destruction, and Arms Control and previously as Special Assistant to the President and Senior Director for European Affairs at the National Security Council.

In the Clinton Administration, Dr. Sherwood-Randall served as Deputy Assistant Secretary of Defense for Russia, Ukraine, and Eurasia. She began her career working for then-Senator Joe Biden as his chief advisor on foreign and defense policy.

Dr. Sherwood-Randall graduated from Harvard College and earned her doctorate as a Rhodes Scholar at Oxford University. Born and raised in California, she and her neurosurgeon husband have two sons, one in graduate school and one in college.

"The Department of Homeland Security is one of the newer cabinet departments established after September 11th," said Professor Watson, Jr.

Previously, Ali served as a law clerk to Judge Amul Thapar of the U.S. District Court for the Eastern District of Kentucky, Judge Sri Srinivasan of the U.S. Court of Appeals for the D.C. Circuit, and Associate Justice Sonia Sotomayor of the U.S. Supreme Court.

She will not be representing the president in personal matters, only professional.

"The White House Counsel advises the president on a lot of things ... from Justice Department matters, judicial nominations, issues regarding national security that have legal aspects to them," she added.

Carlyn Reichel is a member of the National Security Council Agency Review Team on the Biden Transition. On the Biden-Harris Campaign, she served as both Director of Speechwriting and Foreign Policy Director.

Prior to the campaign, Reichel was the founding Communications Director for the Penn Biden Center for Diplomacy and Global Engagement. Reichel joined the Department of State during the Obama-Biden Administration as a Presidential Management Fellow and went on to work as a speechwriter for foreign policy and national security officials at the State Department, the NSC, and the Office of the Vice President.

Reichel grew up in Georgia, graduated from Stanford University, and earned her Master’s in Public Policy from the Harvard Kennedy School.

"[She'll be helping with] everything from a formal speech like State of the Union address or his inaugural speech to just showing up in an airport," Professor Watson, Jr. explained. "It's hard work because you have to get to know the president and use things the president would like to use in his voice."

Caroline McKay served as staff counsel on the Biden-Harris Campaign.

McKay previously worked as a member of the founding team of Protect Democracy and a legal assistant in the White House Counsel's Office during the Obama-Biden administration.

During law school, McKay was a law clerk on the Democratic staff of the Senate Judiciary Committee and a summer associate at Morrison & Foerster LLP. An Atlanta native, McKay is a graduate of Harvard College and the University of California, Berkeley, School of Law.