One month ago Rep. Marjorie Taylor Greene was sworn-in to represent Georgia's 14th District. By Thursday she could be stripped of her House committee assignments. 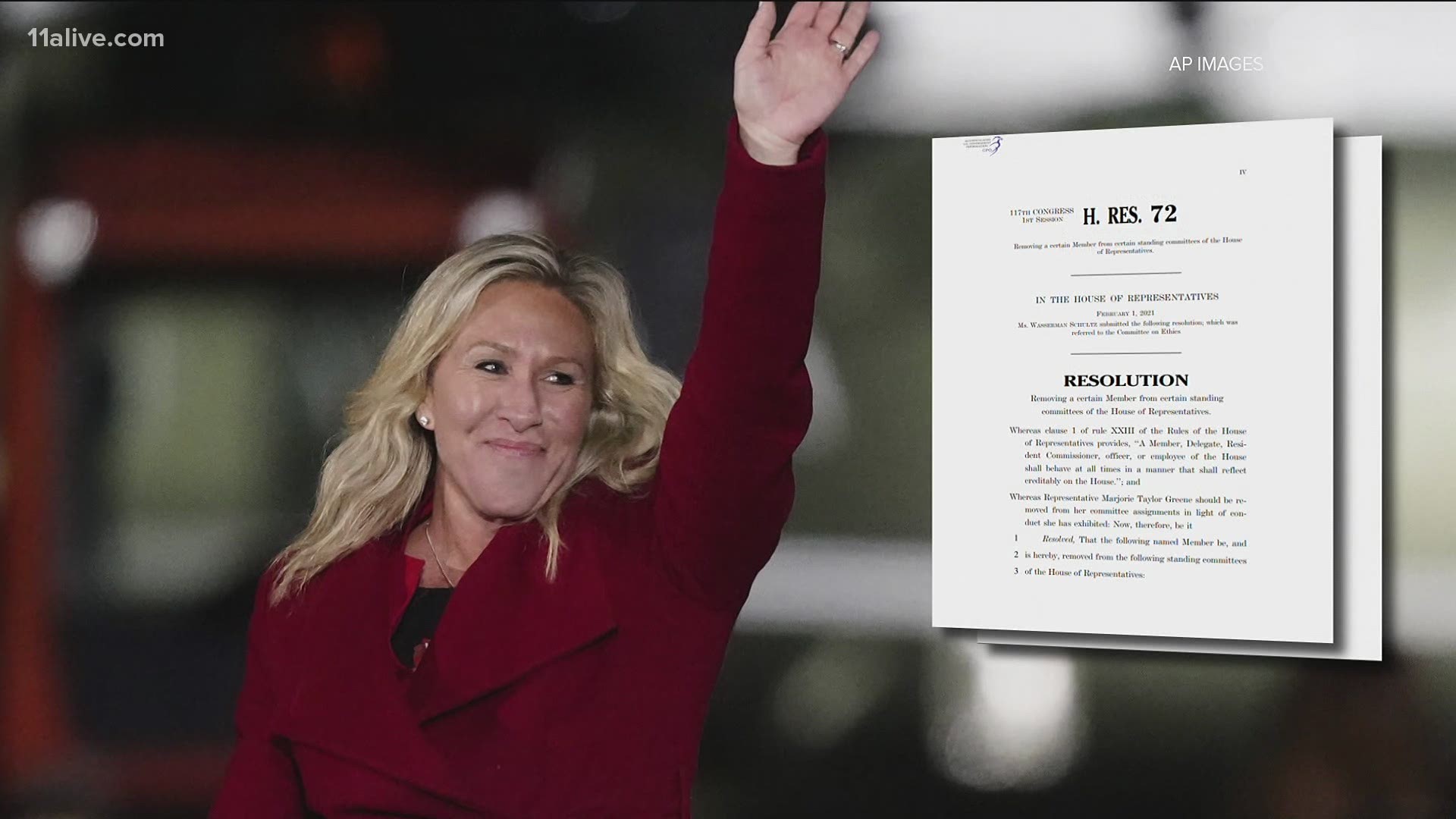 UPDATE: The House Rules Committee has voted to advance the resolution to strip Rep. Marjorie Taylor Greene of her committee assignments to a full House vote.

The U.S. House of Representatives could vote as early as Thursday to remove Republican and Georgia's 14th District Rep. Marjorie Taylor Greene from the two committees she is assigned. Greene currently sits on the Budget and also Education and Labor committees. House Resolution 72 would remove her from both committees. Before the full House can vote on the resolution it will be considered during a Rules Committee hearing on Wednesday.

The resolution is a response by Democrats to Greene's false and incendiary statements and interactions on social media and in video clips on a range of topics - from calling school shootings "false flags," or in other words staged events, to spreading misinformation for months about the 2020 election.

CNN has reported she supported social media posts in 2018 and 2019 calling for violence against prominent Democrats, such as House Speaker Nancy Pelosi, former Secretary of State Hillary Clinton, and former President Barack Obama. She reportedly deleted videos she had posted on Facebook Live where she said Pelosi was "guilty of treason" and that she will "suffer death or she'll be in prison" for her "treason."

11Alive has reached out to Greene several times about the posts and videos but her office has not directly answered questions about them. Instead, they have sent general statements about Greene, her political positions and the "fake news media."

On Wednesday afternoon the House Committee on Rules will hold a hearing to consider the resolution. The committee could then send the resolution to the House floor for a vote.

Watch the hearing live here or in the live player in the story.

Greene responded Monday, the same day the resolution was introduced.

"If Democrats remove me from my committees, I can assure them that the precedent they are setting will be used extensively against members on their side once we regain the majority after the 2022 elections," she said in a Tweet.

If Democrats remove me from my committees, I can assure them that the precedent they are setting will be used extensively against members on their side once we regain the majority after the 2022 elections.

And we will regain the majority, make no mistake about that.

Committee assignments are an important pathway for members of Congress to influence the lawmaking process - committees are where bills are shaped and advanced, they're responsible for holding hearings and they provide oversight of the various areas of the government they specialize in.

Stripping a House member of their assignments is an extraordinary rebuke that effectively sidelines a lawmaker. It's also rare. In 2019, House GOP leaders removed Rep. Steve King, R-Iowa, who had a history of racist comments, from the Agriculture and Judiciary panels after making comments to a newspaper about white supremacy. He lost the Republican primary for his seat in 2020 and is out of Congress.

House Majority Leader Steny Hoyer (D-Md.) addressed the resolution in his own tweet Wednesday. He said he talked with House Minority Leader Kevin McCarthy (R-Calif.) about the matter and Hoyer now plans to move ahead toward a full House vote.

"Throughout her short political career Congresswoman Marjorie Taylor Greene has advocated for violence and made repeated racist, anti-Semitic, and Islamophobic comments," Schultz said during a press conference on Monday. "She has engaged in sedition and spread baseless conspiracy theories, even claiming that the Sandy Hook Elementary and Marjory Stoneman Douglas shootings were staged."

Also on Monday, Senate Minority Leader Mitch McConnell (R-Ky.) released the following statement about Greene: "Loony lies and conspiracy theories are cancer for the Republican Party and our country. Somebody who's suggested that perhaps no airplane hit the Pentagon on 9/11, that horrifying school shootings were pre-staged, and that the Clintons crashed JFK Jr.'s airplane is not living in reality. This has nothing to do with the challenges facing American families or the robust debates on substance that can strengthen our party."

Rep. Brian Babin (R-Tex.) on social media spoke against the resolution and wrote the Democrats' attempt to strip Greene of her committee assignments would set a dangerous precedent.

"For literally centuries, the majority in the House – whether that be Republican or Democrat – has always allowed the minority to choose from their ranks who will sit on as many committee seats as they are allotted for that Congress," Babin wrote on his official Facebook page. "The action put forth by this resolution would shatter that precedent, and even many Democrats are rightly concerned about doing so. If they aren’t speaking out, it’s only because they fear retribution and punishment by the Speaker and her allies."

The move to strip Greene of her committee assignments comes less than a week after Rep. Jimmy Gomez (D-California) said he would be introducing a resolution to expel Georgia's congresswoman from the House.

While that move would completely remove her from Congress, 11Alive's legal and political analysts said the move is unlikely as it requires two-thirds of the House to vote in favor. That would require more than 60 of Greene's fellow Republicans to vote in favor of expulsion alongside House Democrats.

Greene's fellow Georgia freshman representative, Rep. Nikema Williams of the 5th District, has said she will introduce a resolution for her official censure.

Williams said Greene's documented comments and actions were "dangerous, unpatriotic, and a clear threat to every Member of Congress," and called for her resignation.