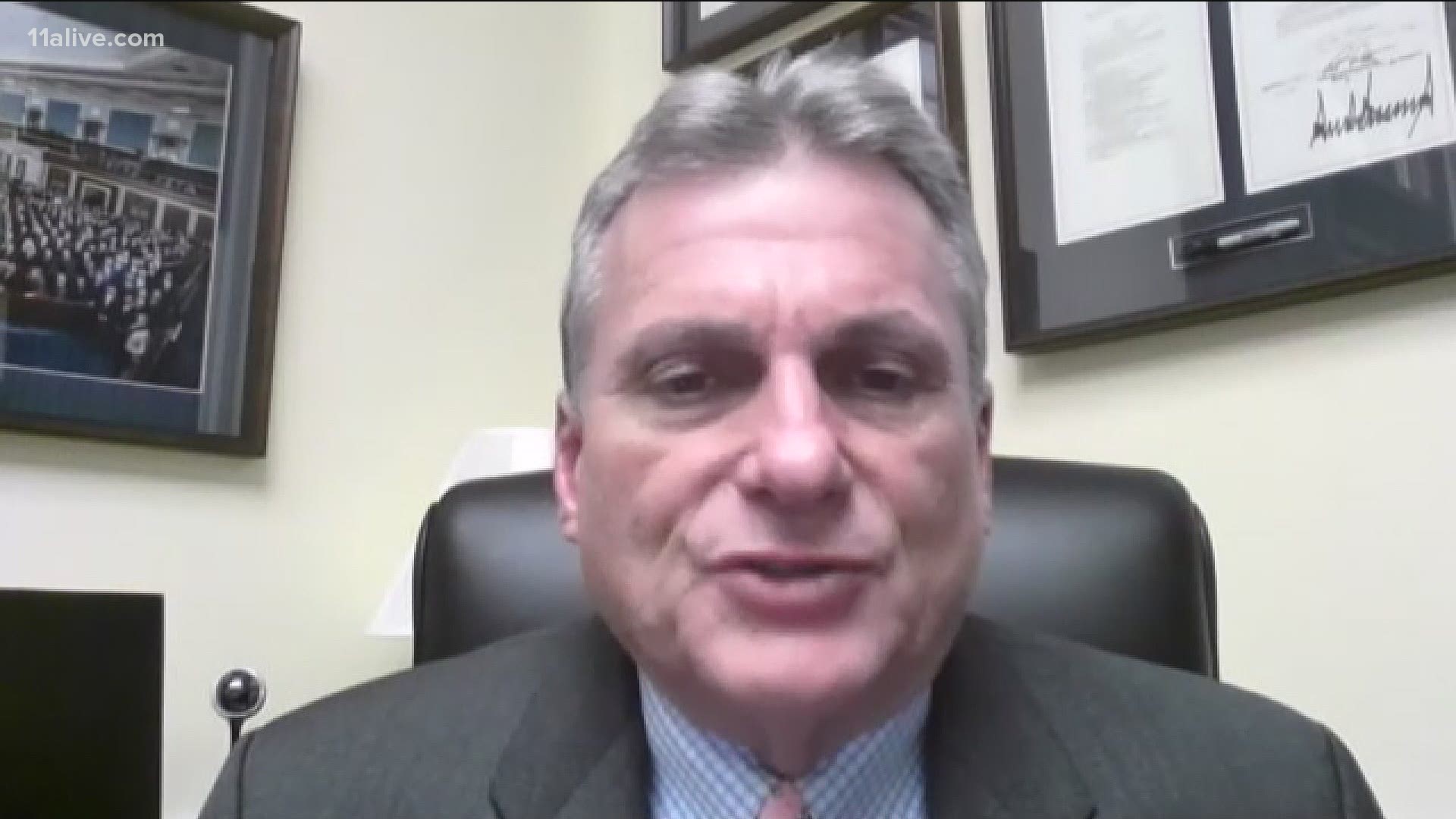 ATLANTA — Georgia supporters of President Donald Trump said on Wednesday that while they were horrified at the violent attack on the US Capitol, a second impeachment, in their opinion, is an overreaction.

"We’ve only had 45 presidents," said state Sen. Brandon Beach (R - Alpharetta). "We shouldn’t be impeaching presidents. We should be let him go out on Wednesday."

On Tuesday, the Alpharetta Republican lost his chairmanship of the Senate Transportation Committee -- apparently as punishment for supporting efforts to overturn Georgia’s November vote for President-elect Joe Biden.

Jones remains an unapologetic supporter of the president and says the violence at the Capitol last week was not Trump’s fault.

"He didn’t storm the Capitol himself. He didn’t lead the charge," Jones said.  "I support the president. I appreciate him for his service and wish him the best in the future."

"We should let him finish his term," Beach said. "And we should treat him with respect as an ex-president."

But Democrats said the attack on the Capitol, and Trump's role in stirring the crowd with his speech beforehand deserves the strong message that impeachment sends.

"We cannot just put this behind us," said state Rep. Calvin Smyre (D-Columbus), Georgia’s longest-serving lawmaker. "We’re living in perilous times. And it appears with the attack on our democracy, I don’t think there’s any recourse but to do what the Congress is proposing today."

"When the mob was in the Capitol, was threatening the Speaker and the Vice President, there was a plea that went to the president to deploy the National Guard," Bourdeaux said. "And he turned them down. He failed to defend the Capitol. So that suggests to me that he was in on it."

"Instead of trying to bring our country together, which is what we need to be doing right now, the Democrats and (House Speaker) Nancy Pelosi are fanning the flames and putting salt in the wound by introducing this impeachment, Article of Impeachment, and it really is a sad day," Carter, a Savannah-area Republican, told 11Alive News shortly before the vote.

"Do you think President Trump’s hands are clean in the insurrection that happened last week?" asked 11Alive's Doug Richards.

"Well look, people need to be responsible for their own actions. It’s what we teach our children, is that actions have consequences," Carter said. "And certainly, the president’s comments have impact. We all know that, and I’m sure he knows that. I don’t think the president wanted this to happen. I don’t think that was his desire. But his intentions? None of us can say what his intentions were."

"Even after the insurrection took place last week, you continued to challenge the Electoral (College) results," Richards said. "Do you have any regrets about that?"

"None whatsoever. Look, you have to separate these two issues," Carter replied. "I represented my constituents in my vote -- Because they don’t believe that we have the election integrity that we need to have in the state of Georgia, and that’s very important to them."

Carter says that President Trump deserves a clean exit as Joe Biden takes office as the 46th president next week.