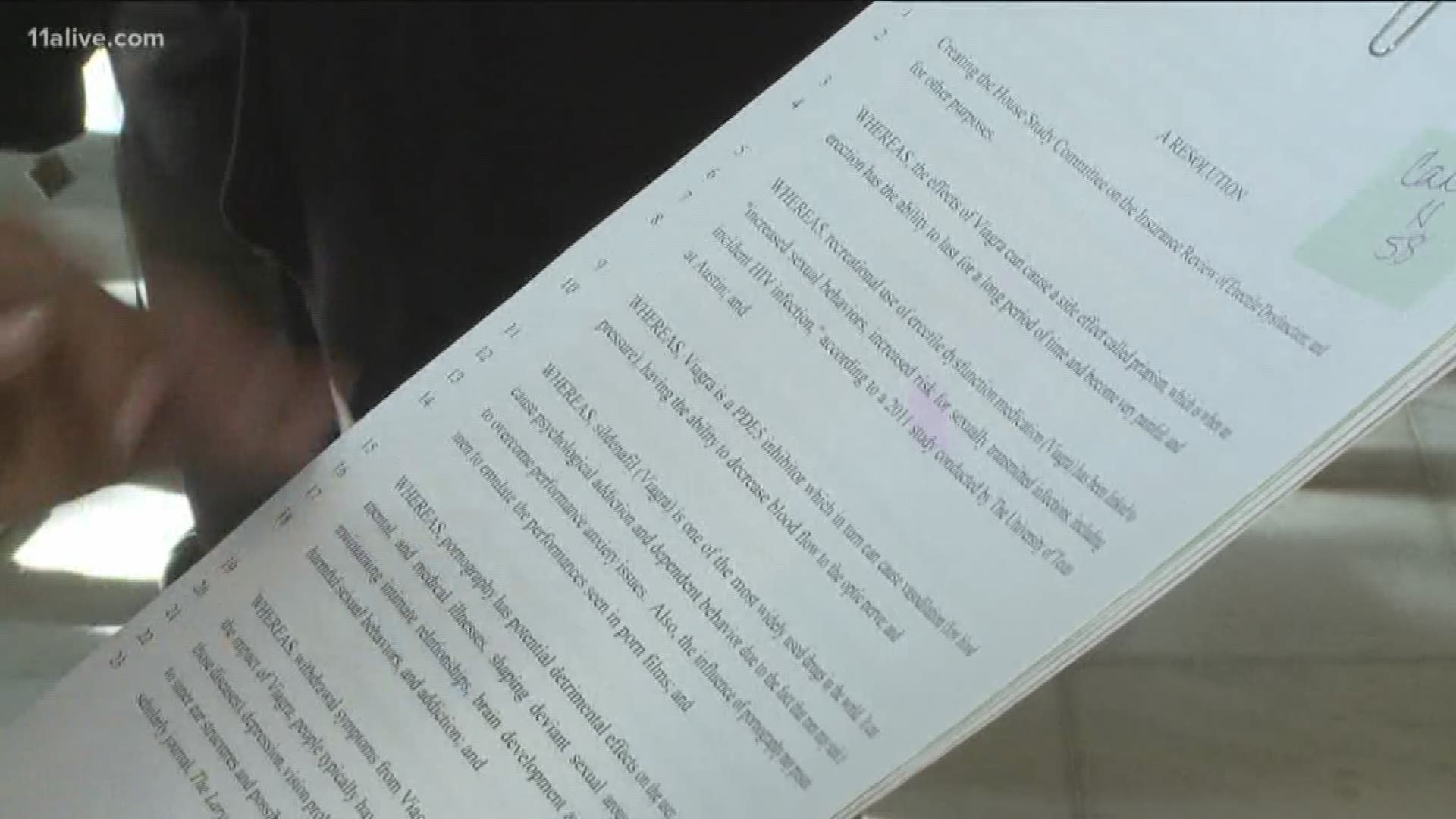 ATLANTA — Two more bills got introduced Wednesday targeting men’s health as part of a backlash against the restrictive abortion bill passed by the Georgia House of Representatives. The sponsors are Democratic women, and the bills are eye-opening.

Although they have no chance of passage, they do have a chance of at least getting the attention of the male lawmakers who have backed a bill restricting abortions.

One of Cannon’s bills, HB 618, would remove Viagra from the prescription benefits of state employees. The other, HR 498, would create a study committee to examine the perils of erectile dysfunction – a committee composed entirely of women.

"Business as usual down here (at the Capitol) is to appoint men to talk about women's issues. So what we’ve looked at this time is how the conversation might be a little bit different if we appoint women to talk about men’s health issues," Cannon told 11Alive News.

A bill she filed earlier this week, HB 604, would require men over age 55 to report to local police “when such male releases sperm from his testicles.”

"One of the barriers to women’s health is sometimes men’s health. So we need to get on top of that," Cannon said.

Cannon says she is dead serious about her legislation – which comes on the heels of a restrictive abortion bill passed by the male-dominated House last week.

When he was in the legislature, former Georgia state Rep. Doug Teper (D-Atlanta) introduced a bill requiring hotels to post the state’s sodomy and fornication laws on guest room doors, and another bill replacing the state’s electric chair with a guillotine.

Neither bill got a hearing but Teper says the message was effective.

"Actually, in the next legislative session, we did away with the electric chair. We changed the method of execution here in Georgia," explained Teper, who is now a political science instructor at Georgia State University. "Sometimes these proposals which, on their face, are kind of humorous and kind of outrageous, sometimes they come into being."

Rep. Cannon says there is nothing frivolous about her measures aimed at men’s issues. Critics who complain they are a drain on the state’s resources might want to know – they are three out of nearly 1700 bills and resolutions introduced in the Georgia legislature so far this year.

AND: Georgia bill would require men to report every release of sperm to officers