READ: Full text of 'The Hill We Climb' from Amanda Gorman, the inaugural poet 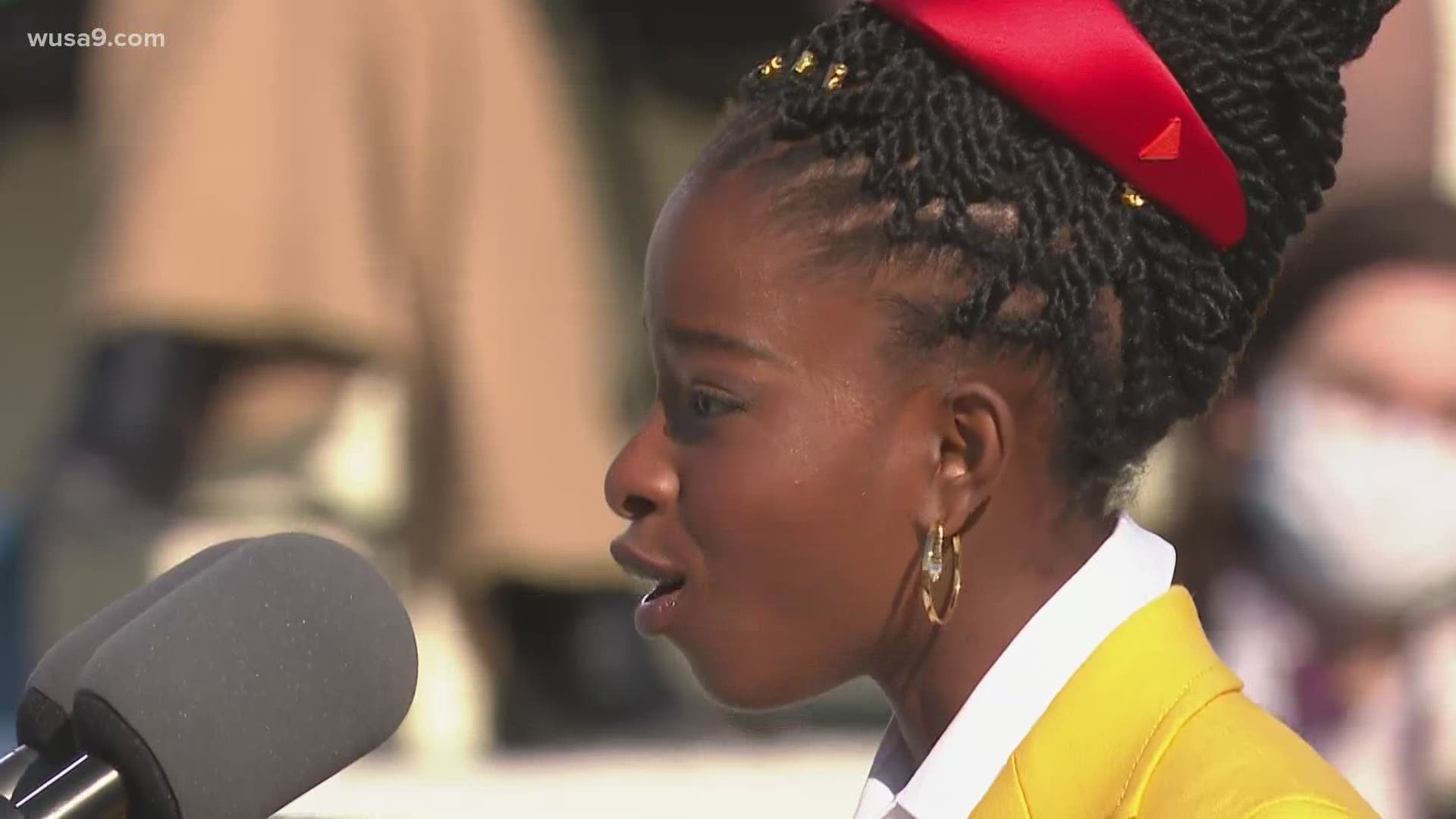 WASHINGTON — Amanda Gorman became only the sixth inaugural poet in history,  and the youngest ever, on Wednesday when she read her poem “The Hill We Climb” after the swearing-in of President Joe Biden and Vice President Kamala Harris.

Gorman’s poem – written at least partially in the aftermath of the insurrection at the U.S. Capitol Building on Jan. 6 – weaves the soaring language typical of inaugural poems past with sharp, syncopated lines about events from just days ago.

Calling America a “nation that isn’t broken, but simply unfinished,” Gorman challenges directly those who sought earlier this month to supplant the will of the people with their own:

“We’ve seen a force that would shatter our nation rather than share it,
Would destroy our country if it meant delaying democracy.
And this effort very nearly succeeded.
But while democracy can be periodically delayed,
It can never be permanently defeated.”

“The Hill We Climb” also places Gorman herself in the historical moment, saying this is a country and a time where “a skinny Black girl descended from slaves and raised by a single mother can dream of becoming president only to find herself reciting for one.”

I have never been prouder to see another young woman rise! Brava Brava, @TheAmandaGorman! Maya Angelou is cheering—and so am I. pic.twitter.com/I5HLE0qbPs

The Inaugural Poem has become a tradition for Democratic presidents since John F. Kennedy’s inauguration in 1961, when Robert Frost read his poem “The Gift Outright.”

At his first inaugural address in 1993, President Bill Clinton invited Maya Angelou to read her poem “On the Pulse of Morning.” Poet Miller Williams read at Clinton’s second inauguration, and Barack Obama had readings by poets Elizabeth Alexander and Richard Blanco at both of his ceremonies.

Gorman, a 22-year-old Harvard graduate, became the country’s first National Youth Poet Laureate in 2017. She is the author of the poetry book “The One for Whom Food is Not Enough.”

READ THE FULL TRANSCRIPT OF THE POEM HERE:

"Mr. President, Dr. Biden, Madam Vice President, Mr. Emhoff, Americans and the world: When the day comes we ask ourselves, 'where can we find light in this never-ending shade, the loss we carry, a sea we must wade?'

We've braved the belly of the beast, we've learned that quiet isn't always peace. And the norms and notions of what just is isn't always justice. And yet the dawn is ours before we knew it, somehow we do it. Somehow we've weathered and witnessed a nation that isn't broken, but simply unfinished.

We, the successors of a country and a time where a skinny Black girl descended from slaves and raised by a single mother can dream of becoming president only to find herself reciting for one.

And so we lift our gazes not to what stands between us, but what stands before us. We close the divide, because we know to put our future first, we must first put our differences aside. We lay down our arms so we can reach out our arms to one another. We seek harm to none and harmony for all.

Scripture tells us to envision that 'everyone shall sit under their own vine and fig tree and no one shall make them afraid.' If we're to live up to our own time, then victory won't lie in the blade but in all the bridges we've made.

That is the promise to glade, the hill we climb if only we dare it, because being American is more than a pride we inherit – it's the past we step into and how we repair it.

We’ve seen a force that would shatter our nation rather than share it, would destroy our country if it meant delaying democracy. And this effort very nearly succeeded. But while democracy can be periodically delayed, it can never be permanently defeated.

In this truth, in this faith we trust for while we have our eyes on the future, history has its eyes on us. This is the era of just redemption we feared at its inception.

We will not march back to what was, but move to what shall be: a country that is bruised but whole, benevolent but bold, fierce and free. We will not be turned around or interrupted by intimidation because we know our enaction and inertia will be the inheritance of the next generation.

Our blenders become their burdens but one thing is certain: If we merge mercy with might, and might with right, then love becomes our legacy in change, our children’s birthright.