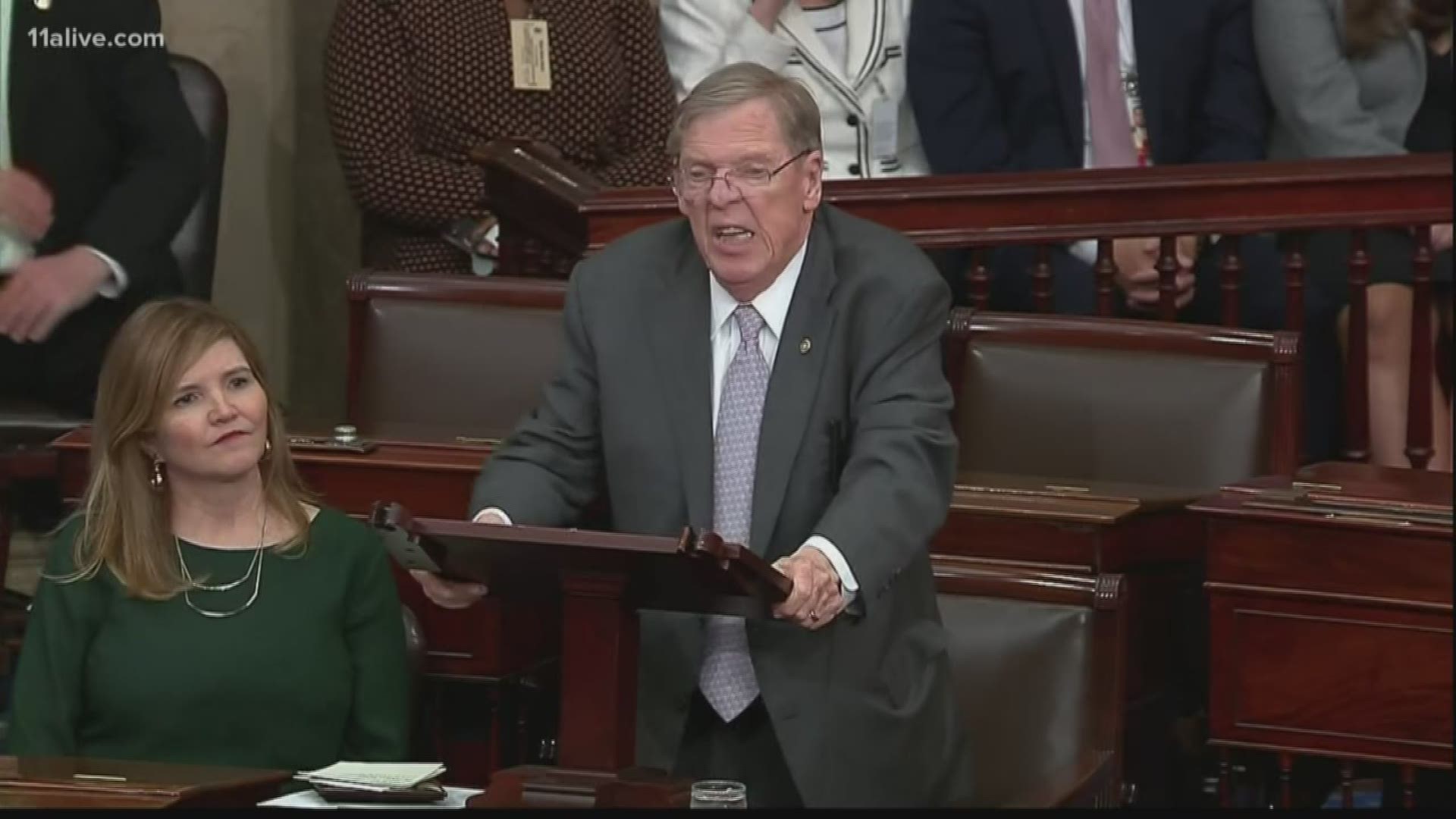 MARIETTA, Ga. — With less than a month until he leaves office, US Sen. Johnny Isakson (R-Georgia) gave a farewell speech to his senate colleagues Tuesday.  Isakson has been a fixture in Georgia politics for forty three years.

Isakson was not only a founder of Georgia’s modern Republican party but he is also, quite likely, the state’s most popular politician.

When he announced for his final re-election in 2016, Isakson had the loud backing of Georgia’s Republican establishment. But he also quietly had the backing of the last Democrat to serve as governor.

"I said, 'Johnny’s my friend, and I’m gonna be for him," Roy Barnes recalled Tuesday in his Marietta law office.

The former governor and Democrat is an unabashed admirer of Isakson. Both men hail from Cobb County.

"I very seldom heard anybody - and never a Democrat - say anything bad about Johnny Isakson," Barnes said.

Isakson served much of his political career as a bipartisan figure in a state run by Democrats. And Isakson embraced it again in his senate farewell speech.

"Newspaper people will write I’m bipartisan or a softy," Isakson said Tuesday. "I am a bipartisan person. I never saw people get things done by not agreeing with each other."

When Isakson ran for governor in 1990 as a Republican, he got soundly beaten by a Democrat named Zell Miller.  Yet Miller appointed his former rival to run the state school board.

"I told Zell at the time – I said, 'great choice'," Barnes recalled. "That goes to show you even though Johnny and Zell had run against each other, they had great respect for each other."

Yet Isakson showed up year after year at Ebenezer Baptist church to celebrate the King Holiday with a crowd that mostly leaned to the left - which sometimes included Democratic Congressman David Scott.

"I have always voted for Johnny Isakson. He’s my friend. He’s my partner," Scott told 11Alive News in 2016.  "And I always look out for my partners."

Barnes says Isakson’s departure will stiffen what he sees as a lamentable partisan divide.

"He is the last of a kind on his side (of the aisle)," Barnes said. "Those forces of moderation are gone."