For the first time publicly, Sally Yates recounted to a Senate panel a Jan. 26 meeting and a follow up session the next day in which she alerted White House counsel Don McGahn that Michael Flynn had lied to Trump Administration officials about his conversations with Russian ambassador Sergey Kislyak before Donald Trump's inauguration. 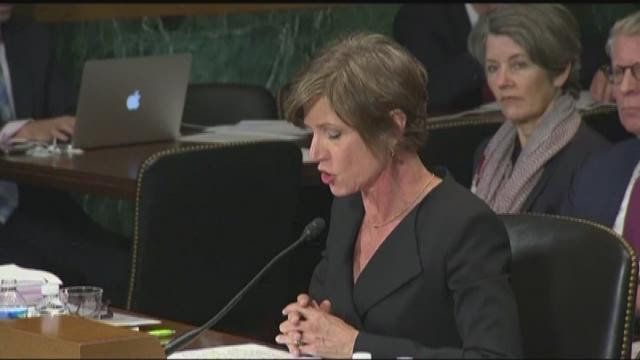 Days before she was fired as acting attorney general, Sally Yates told a Senate panel Monday that she was so troubled that former National Security Adviser Michael Flynn had misled Vice President Mike Pence about his communications with the Russian ambassador that she met twice at the White House to discuss Flynn’s possible vulnerability to blackmail and exposure to criminal charges.

For the first time publicly, Yates recounted to a Senate panel a Jan. 26 meeting – and a follow up session the next day – in which she alerted White House Counsel Don McGahn that Flynn had lied to administration officials about his conversations with Russian ambassador Sergey Kislyak before Trump's inauguration, prompting McGahn to ask whether Flynn should be dismissed.

Yates said she offered no opinion on Flynn's continuing service, but conveyed the "urgent'' nature of her concerns.

"You don’t want a situation where a national security adviser could get blackmailed by the Russians,’’ Yates told a Senate Judiciary subcommittee.

MORE | Yates, fired by Trump, to testify on Russia

Pence, for his part, had said he had been assured by Flynn that the subject of sanctions was not raised in the Kislyak conversations.

Yates, citing the classified nature of how the communications were obtained, declined to elaborate on the intercepts. But she said the anxiety about Flynn's actions was so great within the Justice Department that members of its national security division were consulted, as were other intelligence officials across the government.

"Compromise was the No. 1 concern,'' Yates, referring to the possibility that Russian officials, aware that Flynn had misled the White House, could blackmail him by threatening his career.

"It was a whole lot more than one White House official lying to another,'' Yates said. "It involved the vice president of the United States.''

Shortly after Yates' warnings were made public, Flynn was forced to resign, ending the shortest tenure of any president's national security adviser – while stoking further suspicion about the ties between Trump associates and Russian officials.

Four days after Yates' first meeting with the White House counsel, President Trump fired the career federal prosecutor for her actions on a separate matter. A holdover from the Obama administration, Yates had instructed Justice lawyers not to defend Trump's travel ban.

Some Republicans seized on that decision Monday, including Texas Sen. Ted Cruz, suggesting that her actions were partisan. But Yates defended the directive, saying that there were “constitutional concerns’’ about the language of the order and that she was “not convinced that the it was lawful.”

Yates also claimed that Justice’s Office of Legal Counsel, which had previously approved Trump’s order, was specifically instructed not share their deliberations with the interim Justice leadership before the travel ban was made public.

The specter of Yates' testimony was not lost on Trump, who early Monday fired off two tweets distancing the administration from Flynn while suggesting that Yates may have leaked information about her actions related to the former national security adviser.

"General Flynn was given the highest security clearance by the Obama Administration - but the Fake News seldom likes talking about that,'' Trump said. "Ask Sally Yates, under oath, if she knows how classified information got into the newspapers soon after she explained it to W.H. Council (sic).''

Some rumors have suggested that Yates may throw her hat in the ring for the gubernatorial race in Georgia. However, with the Yates warning and Flynn resignation, their fates have become intertwined, in spite of the local political overtones that some have tried to place on the situation.

Here's an overall timeline of how the Flynn-Yates story has unfolded, and how we ended up getting to where we end up ahead of Monday's highly anticipated testimony from Yates.

1/26 - Yates alerts White House that Gen. Michael Flynn lied about contacts with Russian officials, and that he could be vulnerable to blackmail by Russian intelligence

1/30 - Yates orders Justice Department not to defend travel ban, saying in a memo that she was 'not convinced that the executive order is lawful.'

1/30 - Trump fires Yates for not backing Trump's travel ban. A White House statement said Yates 'betrayed the Department of Justice by refusing to enforce a legal order designed to protect the citizens of the United States."

2/8 - Flynn flatly denied having spoken to Kislyak in December about sanctions placed on Russia by Obama Administration, however, a day later, US Intelligence officials shared an account indicating such discussions actually did take place