In her first interview after meeting with several Hollywood representatives, Abrams told 11Alive's Faith Abubey the discussions were "incredibly productive." 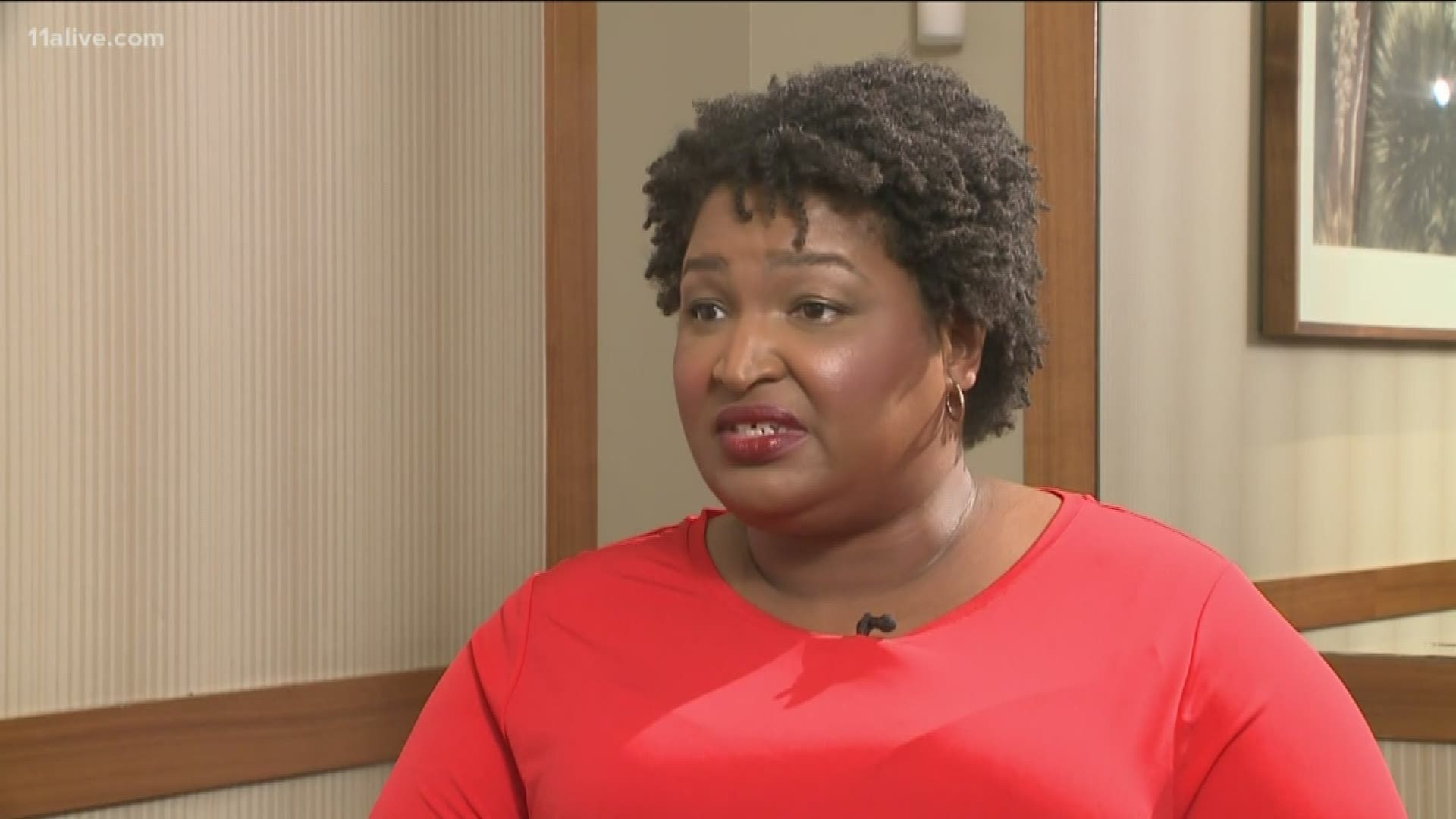 LOS ANGELES — Former Georgia gubernatorial candidate Stacey Abrams hopes her trip to the west coast will ease tensions between the state and the Hollywood film industry.

Gov. Brian Kemp signed the controversial bill into law in May. Barring any legal holdups, the law will go into effect Jan. 1, 2020 and will ban abortions once a fetal heartbeat is detected. That is usually around the six-week mark of a pregnancy, and is sometimes before a woman even realizes she may be pregnant.

Abrams’ meetings with Hollywood insiders on Tuesday about the law were being billed as a series of “critical” conversations. The goal, Abrams' team said, was for the Fair Fight Action founder to find support for women in Georgia and ask the Hollywood insiders to fund political action against the Georgia heartbeat abortion law.

In her first interview after meeting with the Hollywood representatives, Abrams told 11Alive's Faith Abubey the discussions were "incredibly productive."

"Across the board, we have seen strong support for our argument that we need Hollywood to stay and fight," Abrams said. "The entertainment industry may have started here (in Hollywood), but it has grown in Georgia and we want the infrastructure that Georgia has built to continue to have the products that come from our relationship here."

Abrams said she met with several people vital to production of movies and TV shows - from executives to producers to show-runners, even payroll employees - in what was described as a "packed" meeting. From there, she said she would continue to have "conversations" with other representatives before she leaves California on Wednesday.

Abrams described the tone for the meeting as "excited" and brimming with eagerness to have an open dialogue.

"This is a critical issue and they really want to understand how they can support the concerns that women have and that Georgians have, but also continue to invest in a state where 92,000 workers help make the film industry and the entertainment industry one of the most vibrant in the world," she explained.

Abrams said most of the meeting was filled with questions - many of them centering around the argument about the industry's strategy to boycott the state over the law.

"While there is certainly a moral conversation to be had about 'boycott,' that's certainly not the right strategy for Georgia," Abrams said, explaining that hyper-conservative politics would only exacerbate tensions between the industry and the state.

"There's a great deal of disconcertion and a great deal of panic," she acknowledged. "They haven't had a clear understanding of what the governor intends to do. They feel a little bit disrespected by his glib denial and denouncement."

"But more important, they want to be supportive," Abrams added. "They want to take a position that is a - one that reflects their conscience but also one that thinks about the future of their work and the work we do together in this country."

Abrams has been a vocal opponent of the law ever since it started making its way through the Georgia legislature. While she has said she isn’t against the film industry’s protest, she said she doesn’t agree with the strategy and believes it would be more effective for the production companies to stay in Georgia and fight back.

Kemp was invited to meet with the film industry in Hollywood for Georgia Film Day, but he postponed the visit and instead visited Pinewood Studios in Fayetteville, where several big-budget Marvel movies were shot.

In response, the Abrams team said, "the job of leaders is to lead, and Stacey Abrams is leading."

11Alive asked Abrams pointedly about her role in the conversation - one that has been criticized by conservatives as self-promotion that is politically-motivated. Abrams rebuffed those claims, saying she was meeting as a "Georgian" first, while also pointing out she was part of the effort to bring the film industry to the state back in 2008.

According to the Georgia Department of Economic Development, the film industry enjoys a 20 percent tax credit and is responsible for about 92,000 jobs. In 2017, the industry spent $2.7 billion in Georgia.

"I am not the leader of Georgia, and I am very clear about that," Abrams agreed. "(But) I am the only voice they are hearing, because the governor is refusing to have conversations."

As to the claims of politicking, Abrams countered that the industry does not favor one party over another.

11Alive previously reached out to Kemp's office for a comment. A spokesperson declined to specifically address Abrams, but pointed us to a previously released statement where Kemp said he appreciates the film industry's investments in Georgia and will continue to advance policies that empower job creators and encourage investment in the Peach State.

Abrams, meanwhile, maintains she is just stepping up to fill the "vacuum" of information on the issue.

"The reality is, they hoped that the governor would come. He refused to show up. He postponed his trip, he refused to meet with people in the state of Georgia. In a vacuum, any information is helpful."

"So, my role is one of an active citizen who wants to protect jobs and protect women, and I think we can do both without losing the entertainment industry in Georgia," she affirmed.