The state legislator who proposed it said it's because of the "alarming increase" in accidents and traffic fatalities in the state. 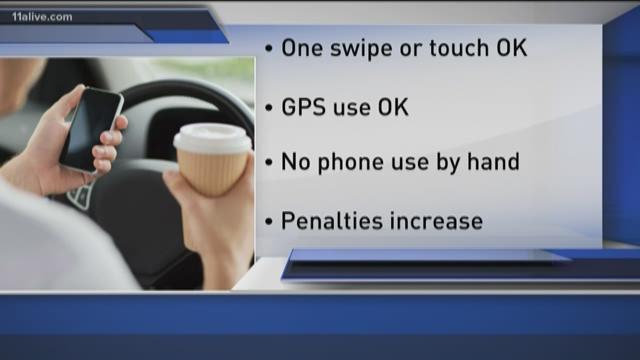 ATLANTA — A state lawmaker is proposing legislation that would make it illegal to drive distracted in Georgia.

Rep. John Carson (R.-Marietta), the chairman of the House Study Committee on Distracted Driving, introduced House Bill 673 Wednesday that would create a hands-free driving law for the state.

VOTE | Should using your phone while driving be illegal in Georgia?

Carson said it was because of the "alarming increase" in accidents and traffic fatalities in the state. After a a downward trend in fatalities between 2008 and 2012, Georgia Department of Transportation data shows a sharp uptick in fatalities, from 1170 fatalities in 2014 to 1432 in 2015. The upward trend continues after that, with 1561 fatalities reported in 2016. Last year ended with 1531 fatalities. Already this year, 14 people have died.

"It is critical that state lawmakers pass hands-free driving legislation as quickly as possible," Carson said. "Distracted driving is a serious public safety issue, and it's proven that the use of mobile devices while driving has amplified this problem."

The new law would also increase fines for distracted driving from $150 to $300 to $450 for the first citation. A second citation would range from $400 to $650. Three citations and above would cost anywhere from $650 to $900. Fines would be up to a judge to decide, based on the severity of the offense.

Additionally, under the proposed measure, points against a license for distracted driving would increase from one point to three points for the first citation. Each additional citation would be four points. Finally, penalties for distracted driving incidents that resulted in manslaughter or severe bodily injury would mirror those of Georgia's drunk driving laws.

"I believe this measure will ultimately save lives by protecting Georgia’s citizens on our roadways and decreasing the number of auto accidents," Carson said.

VOTE | Should using your phone while driving be illegal in Georgia?