Join the conversation throughout the 2016 Republican National Convention in Cleveland.

The political spotlight is shining bright on Cleveland as the 2016 Republican National Convention has officially come to a close.

LIVE CAMS | Choose what you see right now at RNC

Each day during the convention, WKYC gave updates throughout the day to keep you in the loop of what was happening inside and outside of Quicken Loans Arena.

Take a look at some highlights below.

The Republican National Convention comes to a close. Clean-up and teardown begins. TSA is preparing for record-breaking day at the airport as most people associated with the RNC will leave this day.

An hour in and Trump is only getting to vets and the military now. Romney for skewered for not mentioning the military in 2012.

11:06 p.m. : Trump says the greatest compassion will be for our own citizens, and joins in the cheers of "USA."

We're going to have an immigration system that works for the American people.

"We are going to defeat the barbarians of ISIS," Trump says.

10:48 p.m.: Trump is joined on stage by his vice presidential pick Mike Pence.

10:16 p.m.: Donald Trump takes the stage to accept the nomination.

"The violence that afflicts our nation will soon, and I mean very soon, come to an end," he says, saying safety will be restored on January 20, 2017.

"We cannot afford to be so politically correct anymore," he says.

As Trump turns to discussing his immigration policies, the crowd begins chanting "build that wall." "

The chants later continue when Hillary Clinton is referenced. As the audience says "lock her up," Trump responds with "let's defeat her in November."

"A change in leadership is required to produce a change in outcomes," he later adds.

Safety's a big theme of this speech.

"There can be no prosperity without law and order," he says.

"Every day, I wake up determined to deliver a better life for people all across this nation," he says.

Protester in what appears to be the media area on the other side from where I'm sitting. She is wrestling a bit with security.

She recalls playing in her father's office, creating her own buildings on the floor, before transitioning into mentioning her father's ability to "see potential in people before they can see it in themselves."

"He is color blind and gender neutral," she says.

The biggest cheers of the night go to Ivanka.

"Only my father will say, 'I'll fight for you,'" she says, later adding no one has more faith in the American people than Brandon.

9:37 p.m.: Colony Capitol's Tom Barrack is up now. Poltico reports he's the only one out of tonight's speakers that was allowed to speak off-the-cuff.

9:20 p.m.: Peter Thiel, the co-founder of PayPal, is now on stage. He mentions how wages are flat, yet colleg e tuition and health care costs are on the rise.

Thiel mentions his Cleveland connections--his family lived in the area as his father studied at Case Western Reserve University.

9:03 p.m.: We don't apologize for America, we celebrate America," said RNC chair Reince Priebus. It's his second apperance of the evening.

"We are the party of new ideas," he said.

During @Reince speech, "Lock her up!" cheers resume for, I think, the first time tonight. #RNCinCLE

8:45 p.m.: Dr. Lisa Shin from 'Koreans for Trump' shares her parents' immigration story. Later, she adds that Clinton represents everything wrong with the system.

"With extreme carelessness, she's compromised our national security," she said.

She calls for making moves to decrease the national debt, protect the borders, and stand strong with Israel.

8:30 p.m.: U.S. Rep. Marsha Blackburn gives a shoutout to her home state of Tennessee, along with those watching on iPhones and on Twitter.

"Donald Trump has the skills required to lead this nation," she said.

8:11 p.m. Former NFL quarterback >Fran Tarkenton is up.He makes a reference to Peyton Manning right off the bat, kicking off a string of football analogies and stories. 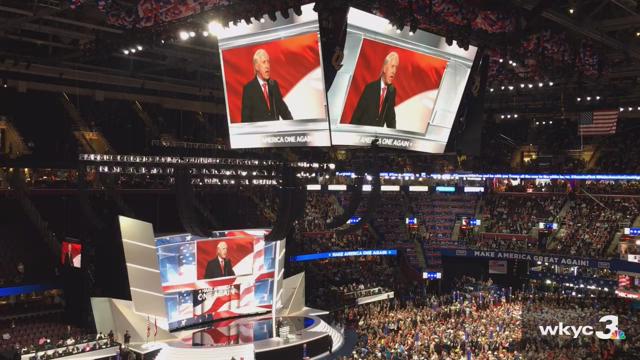 "We will never allow Hillary Clinton to become the next president of the United States," he says.

The crowd responds well to his comments on "all lives matter," along with calls to unite all Americans.

"Donald Trump will build the wall, " he says to huge cheers from the crowd.

7:50 p.m.: The first scheduled speaker has taken the stage--Liberty University president Jerry Falwell, Jr.. He calls Trump a "visionary," "true patriot," and a champion of the common man.

7:05 p.m. Cleveland Police tell WKYC that reports of officers and/or people in downtown Cleveland being stuck with needles is "untrue."

6 p.m. The Investigator Tom Meyer talked exclusively with protesters who object to an FBI no-knock raid in Lorain County.

5:45 p.m. A College of Wooster student returns Ivanka's earring that she found on the floor of The Q a few days ago. She's now a social media sensation with the #GetIvankaHerEarring Back

4:15 p.m. University of Akron says the Donald Trump event scheduled for Friday has been canceled.

3:20 p.m.: Crews worked to prepare the stage for Donald Trump, which included turning everything gold.A line of American flags was also added to the back of the stage.

2:45 p.m.: Make earrings great again? A College of Wooster student claims she found an earring that looks pretty darn similar to one Ivanka Trump was spotted wearing Wednesday night. Now, she's trying to reunite the bling with its rightful owner by using #GetIvankaHerEarringBack.

3:45 p.m. Donald Trump and his daughter Ivanka took to the new "gold" stage to rehearse for tonight's finale of the RNC.

2:30 p.m.: Yikes. A headline on NBC News reads "First Read: Three Nights of Unforced Errors." The piece highlights a few of the convention's biggest scene stealing moments--like Monday's 'delegate rebellion' and the Trump camp's thoughts against Gov. John Kasich--and mentions how easily these things could have been avoided.

1:45 p.m.: On the final night of the RNC, the Quicken Loans Arena is still pretty busy. Take a look at this behind-the-scenes look of NBC's Lester Holt talking to two of the Trump children. 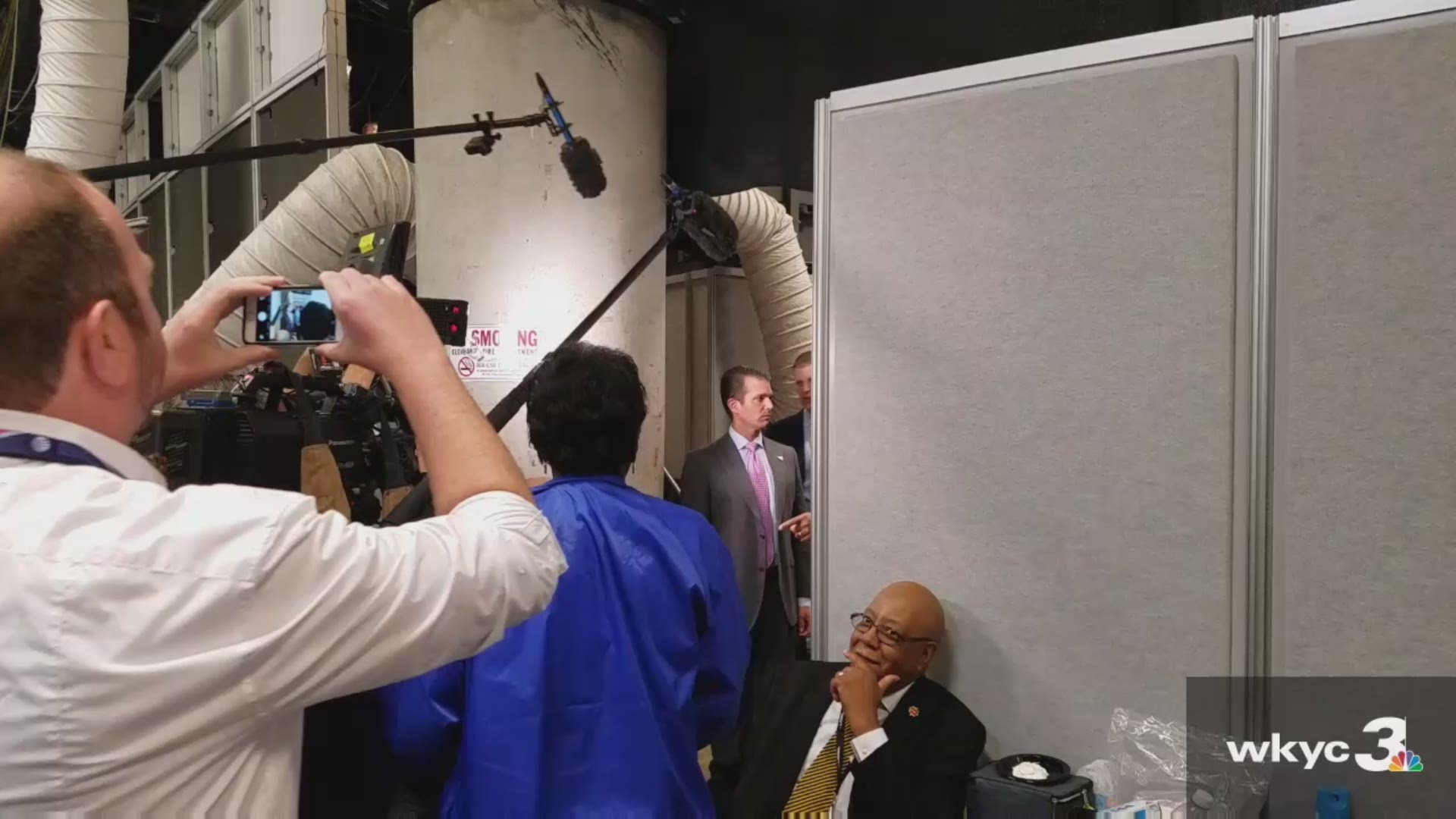 8:45 a.m.: The 18 people arrested Wednesday during demonstrations in downtown Cleveland are due in Cleveland Municipal Court. First to be arraigned at 8:45 a.m. was Julie Leroy, of Chicago. She was charged with two misdemeanor counts -- failure to disperse and aggravated disorderly conduct. She pleaded not guilty and has been scheduled to be back in court at 10:30 a.m. Aug. 8 before Judge Charles Patton.

Other cases not related to the protests are also being heard today. There is no schedule as to when the others arrested at the protest will be in court.

Charges include 2 people charged with felonious assault on a police officer. The others were charged with misdemeanor charges of failure to disperse, disorderly conduct and resisting arrest.

3:08 a.m.: It's the final day in Cleveland as Donald Trump will accept the Republican party's nomination for president of the United States.