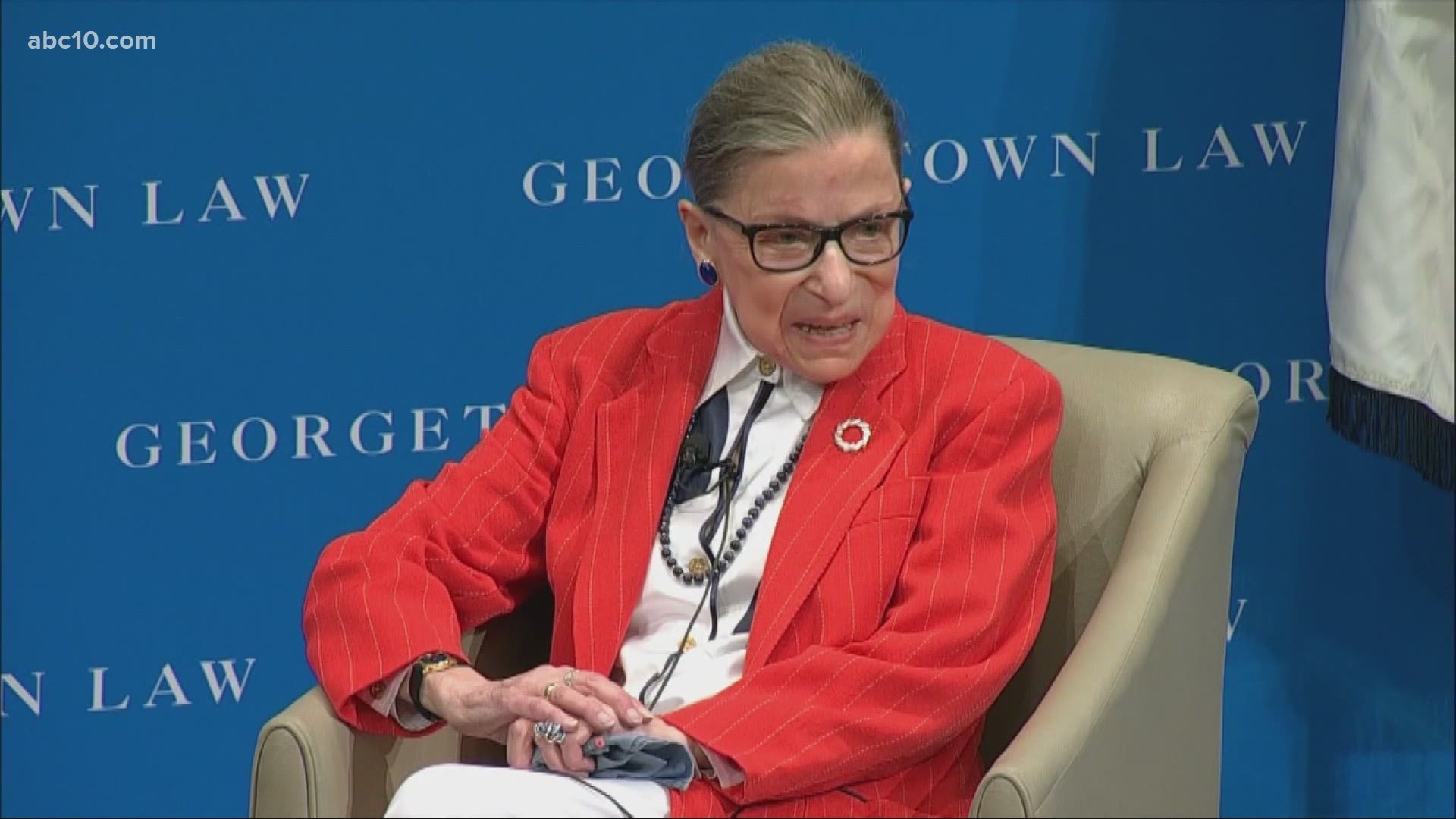 SACRAMENTO, Calif. — Supreme Court Justice Ruth Bader Ginsburg, a diminutive yet towering women’s rights champion who became the court’s second female justice, has died at her home in Washington. She was 87.

Ginsburg announced in July that she was undergoing chemotherapy treatment for lesions on her liver, the latest of her several battles with cancer. Ginsburg spent her final years on the bench as the unquestioned leader of the court’s liberal wing and became something of a rock star to her admirers.

"We just lost our champion, we lost our superhero," the store owner said.

Here's the reaction from all over the country:

We have lost a giant among us. A trailblazer. And a champion of equality and justice.

Our hearts ache tonight. Let us honor her memory by preserving the very ideals she fought so tirelessly for.

My deepest sympathies are with those who loved, knew, and looked up to Ruth Bader Ginsburg.

This August marked 27 years of service to our country as a Supreme Court Justice and we mourn her loss, not as Republicans or Democrats, but as Americans. pic.twitter.com/g95wv2ImCJ

Justice Ginsburg was a hero and inspiration to so many women, including me. She spent her entire career fighting for gender equity.
I am grateful for her incredible bravery, intelligence and dedication.
May she rest in peace.
Justice, Thank you so much for all you gave us. 💔 pic.twitter.com/4YRWOxXyKl

The passing of Justice Ruth Bader Ginsburg is a tremendous loss to our country. She was an extraordinary champion of justice and equal rights, and will be remembered as one of the great justices in modern American history.

A shock. A sadness. A great loss. The passing of Ruth Bader Ginsburg leaves a hole in a nation already reeling. She is an American hero, in every sense. We can honor her by joining to carry forth her legacy of equality, empathy, and justice. May she Rest in Peace.

Justice Ruth Bader Ginsburg was a trailblazer who served the Supreme Court—and the country—faithfully for 27 years. My prayers go out to her family during this time.

Ruth Bader Ginsburg was a true giant, an American hero and a warrior for justice. Our country mourns her loss deeply—we must honor her by carrying on her legacy of fairness and equality.

Ruth Bader Ginsburg spent her life in pursuit of an equal world. She fought for the unheard, and through her decisions, she changed the course of American history. We can never repay what she has given us, but we all can honor her legacy by working toward true equality, together. pic.twitter.com/lh6bioRuED

My thoughts and prayers are with the family of Ruth Bader Ginsburg tonight. She leaves a legacy of thoughtful public service, a dedication to the law, and a life of great accomplishment. May she Rest In Peace.

One of the most beautiful and interesting modern public friendships was that between Ruth Bader Ginsburg and her ideological opposite Antonin Scalia. They both loved opera, law and the U.S.A. I always loved their relationship. Let this part of their legacy be an example to us all

Justice Ruth Bader Ginsburg was a trailblazer who served the Supreme Court—and the country—faithfully for 27 years. My prayers go out to her family during this time.

“So that’s the dissenter’s hope: that they are writing not for today but for tomorrow.”

To pay tribute, those who believe in equality & freedom must fight for the ideals she championed.

Ruth Bader Ginsburg was a champion for humanity.

Despite the uncertain nature of our politics, she always stood up for what is right, and she helped us bend the arc of the moral universe toward justice.

She will be greatly missed.

Just heard the worst news... so sad! Ruth Bader Ginsburg you will live in history forever. May you rest in peace. 😢🙏😢