11Alive’s search for State Rep. David Stover went from the State House, to Newnan and all the way to the United Kingdom.

Republican State Rep. David Stover is hard to get ahold of. Voters in District 71, which encompasses Newnan, said he is chronically absent from his legislative office at the State Capitol in Atlanta and his district office in Newnan.

His official district address listed on his House of Representatives biography is a UPS store. The clerk there said he hadn’t seen Stover in months – and he doesn’t know how to contact him.

Stover’s voting record also shows he hasn’t shown up for work. Official records from the 2017-2018 legislative session show he was absent for 39 votes – and missed 15 days of a 40-day session. He also did not show up to the general assembly’s Special Session for Hurricane Michael relief, where the legislature voted to give millions of dollars to Georgians affected by the devastating storm.

“That tells me someone is not interested in being in the legislature,” said Georgia watchdog William Perry. “He clearly cares more about his personal business than his constituents, and he has no business being there.”

Stover defended his absence from legislature on his professional Facebook page, saying he still has to make money outside the session and his job in IT takes him out of state.

Still hoping to reach Stover, 11Alive knocked on his door in Newnan to see if he was home. Turns out – the house is vacant -- locked up and for sale. The property listing has been on the market for 3 months, with pictures showing empty rooms.

So, where is Stover?

According to Facebook, he married a woman from the UK in August, after divorcing his wife of 20 years. Stover announced their engagement one month after his divorce was finalized, according to court documents.

There are photos online congratulating the new couple, along with custom chocolates with their wedding date inscribed.

While the two were still engaged, Stover moved quickly to ensure their status in the United States – writing to a family court judge in the UK that he wanted to adopt the woman’s foreign children and move them to Georgia. The letter, written on official Georgia House stationary, made it clear he is an elected official who owns a 5,400 sq. ft. home – the same house that sits empty and is currently up for sale in Newnan.

“The letter is appalling. The fact that such personal business is put on state letterhead tells me he’s willing to abuse his power,” said Perry. “And, it’s absolutely disgusting. There is no excuse for that to be on state letterhead.”

In the letter, Stover made a point to talk about the kids’ education – telling the judge he was saving up for them to attend college in the United States and said they would qualify for the Hope Scholarship, which is available to Georgia students who have demonstrated high academic achievement. The scholarship also provides financial assistance to those who attend college in Georgia.

During his re-election campaign, Stover slammed "illegal immigrants" who apply for the Hope Scholarship, sharing an ad to his Facebook page accusing Democrats of wanting to give “illegal aliens” access to the Georgia program. 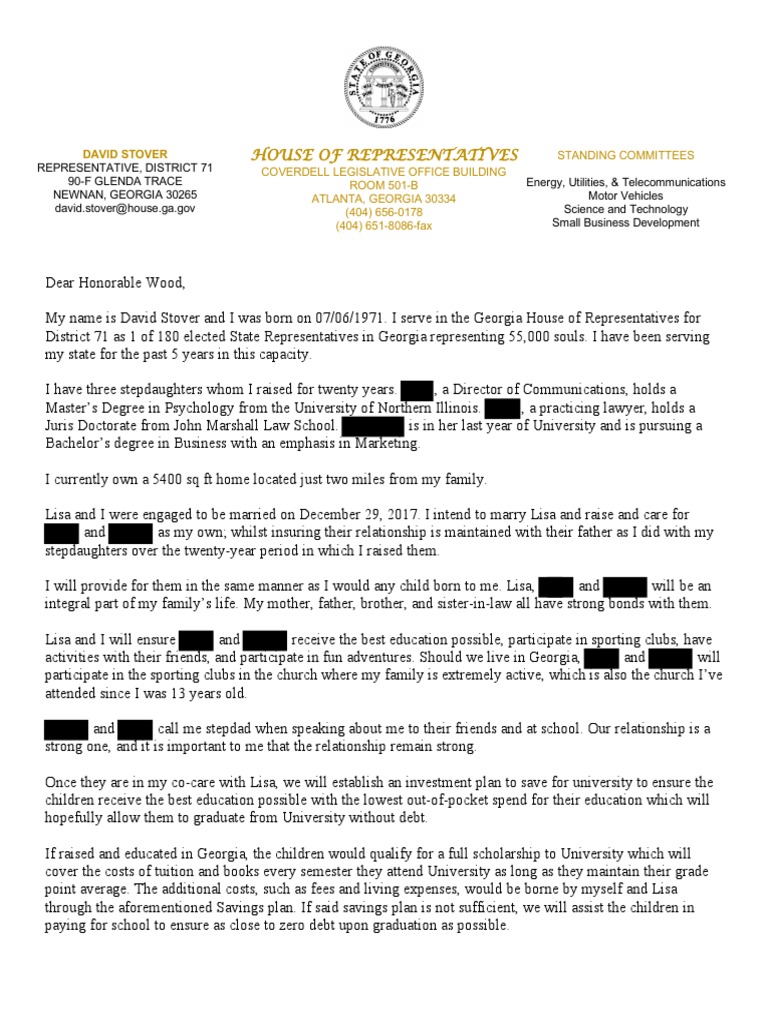 395004127 Rep Stover s Letter to U K Judge Requesting Custody of British Children Redacted | Social Institutions | Society
If raised and educated in Georgia, the children would qualify for a full scholarship to University which will cover the costs of tuition and books every semester they attend University as long as they maintain their grade point average. The additional costs, such as fees and living expenses, would be borne by myself and Lisa through the aforementioned Savings plan.

In the letter to the U.K. judge, Stover also said then-fiancee had an offer for a full visa to come to the United States. He also stated that if the judge denied their custody request to move the British children to Georgia, he would immediately resign as state representative.

The judge ruled against the letter in May, telling the couple that the kids from the woman’s first marriage had to stay in the UK.

Less than two weeks later, Stover ran for re-election in District 71. He did not withdraw his name, despite telling the judge he would if the custody ruling did not go his way. In August, he was married here in Georgia.

In November, he was re-elected to his seat -- 6 months after telling the judge he would resign.

A complaint filed with the Georgia House Ethics Committee claims Stover has been living in the UK since then.

Perry said that the fact Stover has not shown up for work – especially during the special session designed to help people recovering from Hurricane Michael – is inexcusable.

“I find it unfathomable. I do not understand why this man didn’t resign a long time ago, or chose not to run for special election,” Perry said. “He will now cost taxpayers thousands of dollars and he has misrepresented them by not showing up.”

What does Rep. Stover have to say about this?

11Alive tried calling but he didn’t pick up. He did not answer email from his official address, and messages to his state Facebook account were redirected to an inactive website. It appears that all lights are off – and no one is home.

Where is Rep. Stover?