The federal lawsuit was filed on Thursday 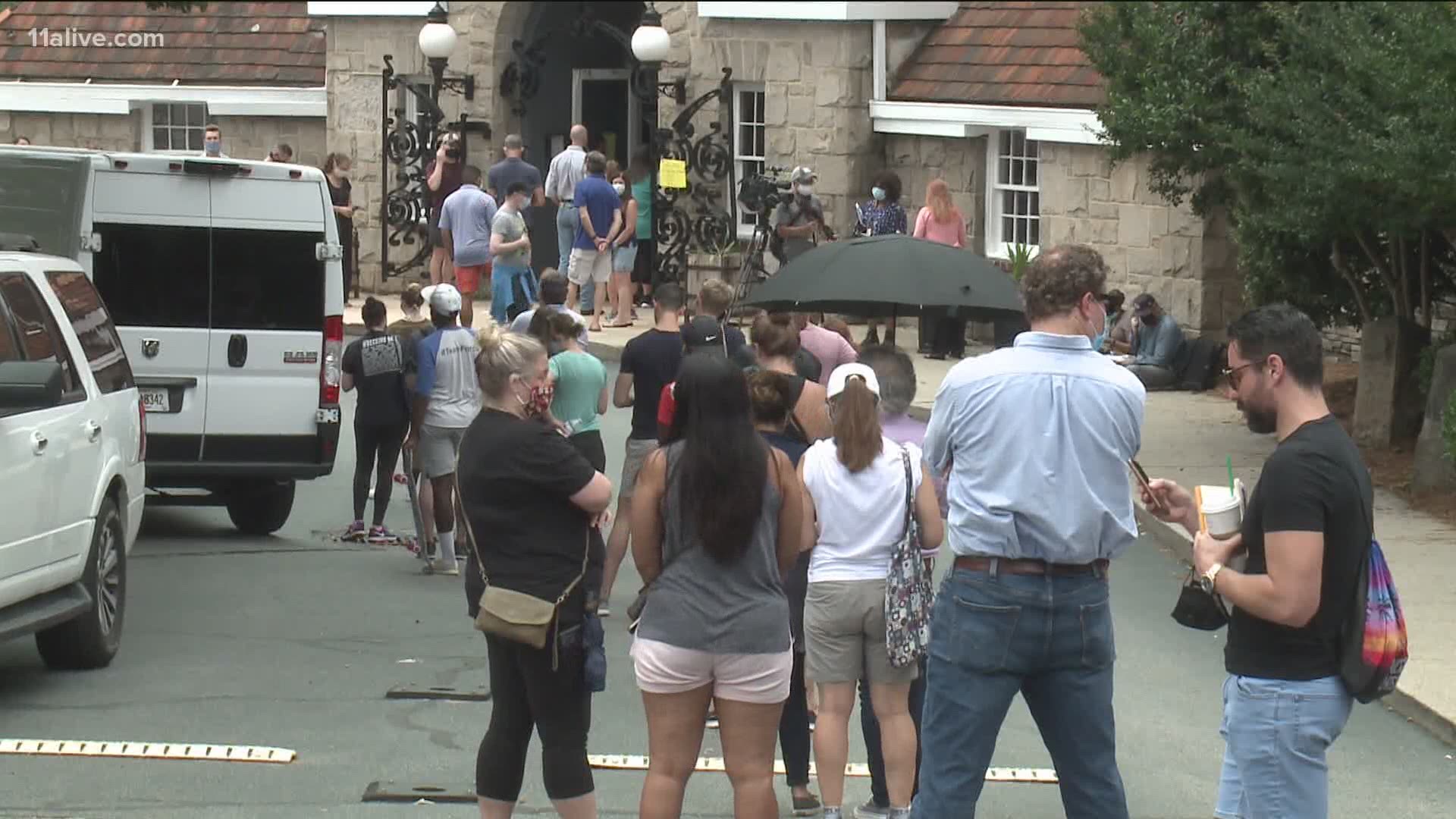 ATLANTA — National and state Democrats filed a federal suit against Georgia on Thursday which aims to fix a number of conditions they argue led to the long lines and hours-long waits some polling locations saw in June.

The concern, the suit states, is that the situation Georgia saw during primary voting will be even worse on Election Day in November.

The suit was brought by the Democratic Party of Georgia and the national Democratic Senatorial Campaign Committee. It claims both Georgia Secretary of State Brad Raffensperger and several county boards of elections failed voters.

In the rancorous aftermath of the June voting failures, Raffensperger said that "while almost every county delivered successful elections - a couple did not," as county officials shot back that he had left them under-resourced and unprepared.

The lawsuit filed on Thursday, essentially, says both are right.

It names both Raffensperger, the state election board and the county elections boards of Fulton, DeKalb, Cobb, Gwinnett, Chatham, Clayton, Henry, Douglas, and Macon-Bibb as the defendants.

It asks that a federal judge issue an injunction requiring Raffensperger's office and the county boards to:

The suit argues all of those things, from polling sites to voting machines to poll workers, were mismanaged in June - and are chronically mismanaged in Georgia.

Saying that "since at least 2008, Georgia voters have faced some of the longest average wait times to vote in the entire country, often waiting hours to vote, with many deterred from voting and disenfranchised," the suit argues, "the causes of these lines are directly traceable to Defendants, who have the power to remedy them."

"Election after election, Defendants’ persistent closure and consolidation of polling locations and failure to provide adequate election equipment, elections officials and volunteers with sufficient training, available technicians to address technical problems that arise, sufficient time to set up polling locations, and emergency paper ballots for backup when equipment breaks down or malfunctions, have repeatedly resulted in voters (and particularly minority voters) waiting in unconscionably long lines to exercise their right to vote," it says.

"The Democratic Party of Georgia, Fair Fight and Democratic legislators all opposed Secretary Raffensperger’s legislation that would have required counties to add more polling places, equipment, and/or poll workers if any polling place had a wait time of more than an hour at any point throughout the day. Now, they are asking a federal court to order just that. Meanwhile, Secretary Raffensperger has been providing Georgia counties with specific data to help them know where they might need to add more polling places or voting equipment in order to avoid lines in November.

We will work around the clock from here through the elections – under the extraordinary circumstances of a pandemic – to ensure that all eligible Georgia voters are informed fully about any polling place changes, that we have enough precincts and poll workers, and that we do everything possible to minimize lines. Many of these duties fall under the counties’ jurisdiction, but we do everything in our power to help them carry out a successful election."

RELATED: Amid finger-pointing after Georgia's dysfunctional election, who's actually responsible for what?

The lawsuit highlights the stories of three individual plaintiffs, all Georgia voters who experienced varying degrees of difficulty casting a vote in June.

Plaintiff Lucille Anderson was identified as a 71-year-old Black resident of, and registered voter in, Fulton County who has "rarely missed an election."

It said she arrived at 9 a.m. at her Union City polling location in June and then had to go to work because the line was too long. When she came back at 4 p.m., the line was even longer, "stretched out the door, around the building, down the street, and up the next street," the suit states. Struggling in the heat, it says she left and came back at 6:30, with the line again even longer than before, then "went home intending to return but was unable to." She ultimately did not vote.

It details the experiences of two other voters -- one, Sara Alami of Fulton County, who, after applying for an absentee ballot she never received, arrived at her polling location at 6:30 a.m. and waited until 12:30 p.m. to vote, forcing her to cancel an entire day's work; and the other, Gianella Contreras Chavez, who left work early to arrive at her polling site at 4 p.m. and eventually was not able to vote until 1 a.m.

The suit ultimately argues that without intervention, the lines will "impose severe burdens on Georgia voters, including disenfranchisement," as they go to choose a president in November.