There's a lot of talk of voter suppression in Georgia. What exactly is it?

Tuesday's voting system failures have raised accusations of voter suppression, not the first time such calls have been seen in the Peach State. 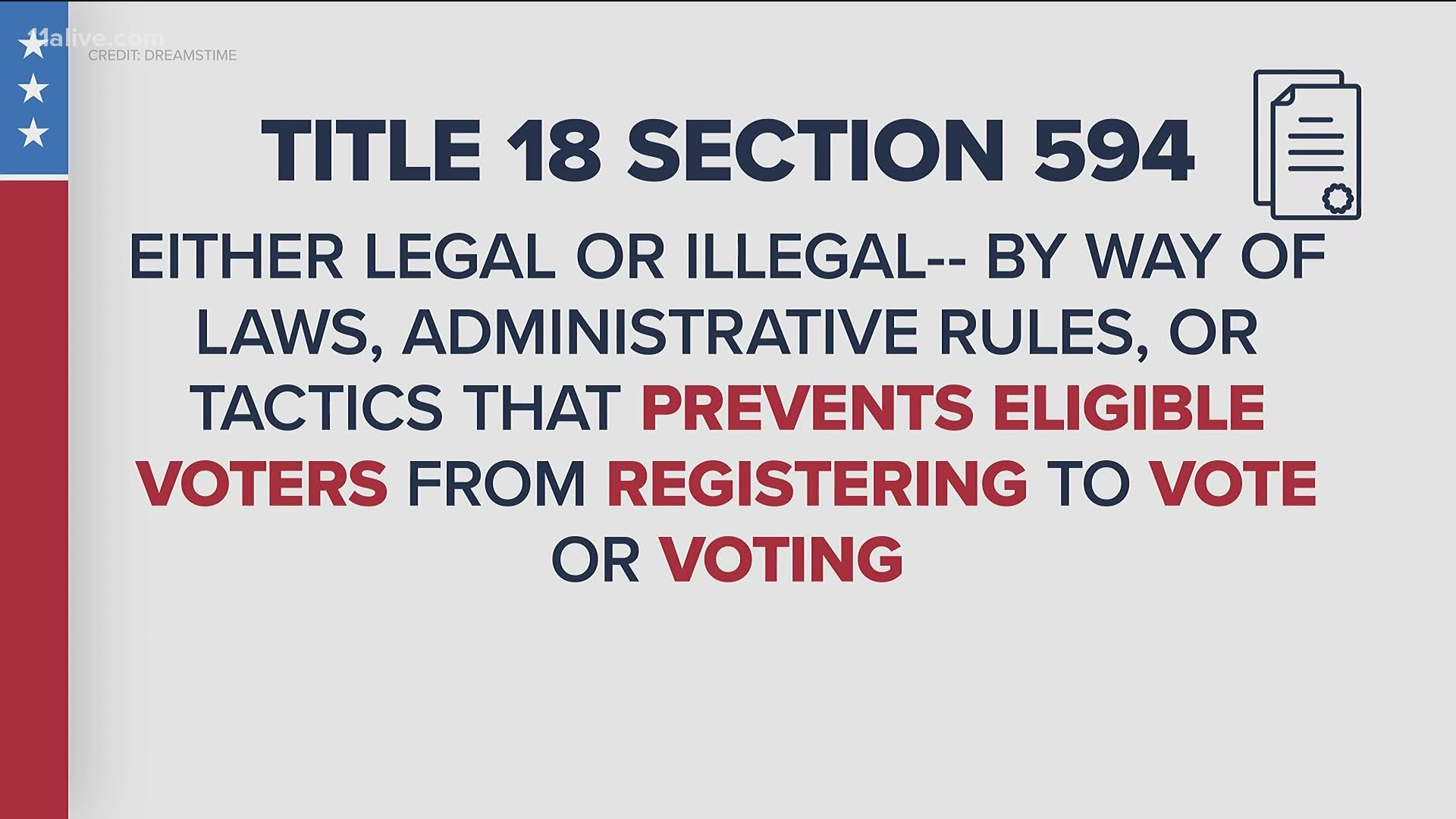 ATLANTA — Georgia's democratic process has seen a  critical breakdown in many communities Tuesdsay, as voters trying to cast their ballots in primary elections have found themselves waiting hours over a range of issues with voting machines and logistics.

Those issues have included machines allegedly not working properly, machines that were delivered late or never delivered at all to polling sites and issues with poll workers operating the much-contested new machines.

Many of those waiting in lines at the polls have reported seeing others simply give up and leave.

These voting system failures have raised accusations of voter suppression, not the first time such calls have been seen in the Peach State.

Going back to the 2018 gubernatorial election, Democrat Stacey Abrams alleged attempts at voter suppression after her narrow loss to Gov. Brian Kemp, who at that time was overseeing the election procedures in his own race as the Georgia Secretary of State.

With all the talk again today of a suppressed vote, it's worth examining what people mean by that.

The matter traces its modern roots to the 2013 decision Supreme Court decision in Shelby County v. Holder, which was ruled in favor of Shelby County, Alabama, and ended some Voting Rights Act provisions. The act passed during the Civil Rights Movement was meant to protect the vote of black people, who were frequently the target of highly discriminatory laws and policies designed to discourage them from voting.

RELATED: How a Georgia grandmother almost went to prison -- and why some are calling it voter suppression

The voting rights group Demand The Vote defines it this way: "Voter suppression is any effort, either legal or illegal, by way of laws, administrative rules, and/or tactics that prevent eligible voters from registering to vote or voting."

So when people say what Georgia is seeing today is voter suppression, they generally mean the process of voting has been made so dysfunctional that it is, by design, meant to keep people from voting - "tactics that prevent eligible voters from voting."

Georgia Secretary of State Brad Raffensperger has refuted claims such as these by saying it's on counties if their election processes didn't go smoothly today.

"We've got the reports that people are inserting cards upside down, that gets back to the employees didn’t understand the system," he said. "So what were they doing for all these months? All of a sudden they wake up and they say, 'let's have an election on Tuesday?'"

Counties, in turn, have pointed the finger back at Raffensperger. Officials in DeKalb County said responsibility for overseeing a smooth statewide vote "rests squarely at the feet" of the secretary of state and Gov. Brian Kemp, and a Fulton County election official told 11Alive's Faith Abubéy that local boards of election were set up to fail.

“Isn’t he the top elections official in the state? As counties, we all knew they would try to wash their hands of any responsibility for this," Fulton County Board of Elections Director Richard Barron told her. "We were asked to turn into a 'ballot-by-mail' state overnight and we didn’t have the tools to do it.”

Abrams, perhaps the state's foremost voice on voter suppression, stopped short of calling it exactly that today. But she said "Georgians deserve better" and that Raffensperger "owns this disaster" and "must stop finger-pointing and fix it."

The stakes were relatively lower today, in a primary election. But ahead of what's expected to be a tightly-contested election in November, Atlanta Mayor Keisha Lance Bottoms voiced her misgivings about Georgia's election processes as things devolved today.

"Let’s all work, hope and pray that this not be a preview of November," she said.