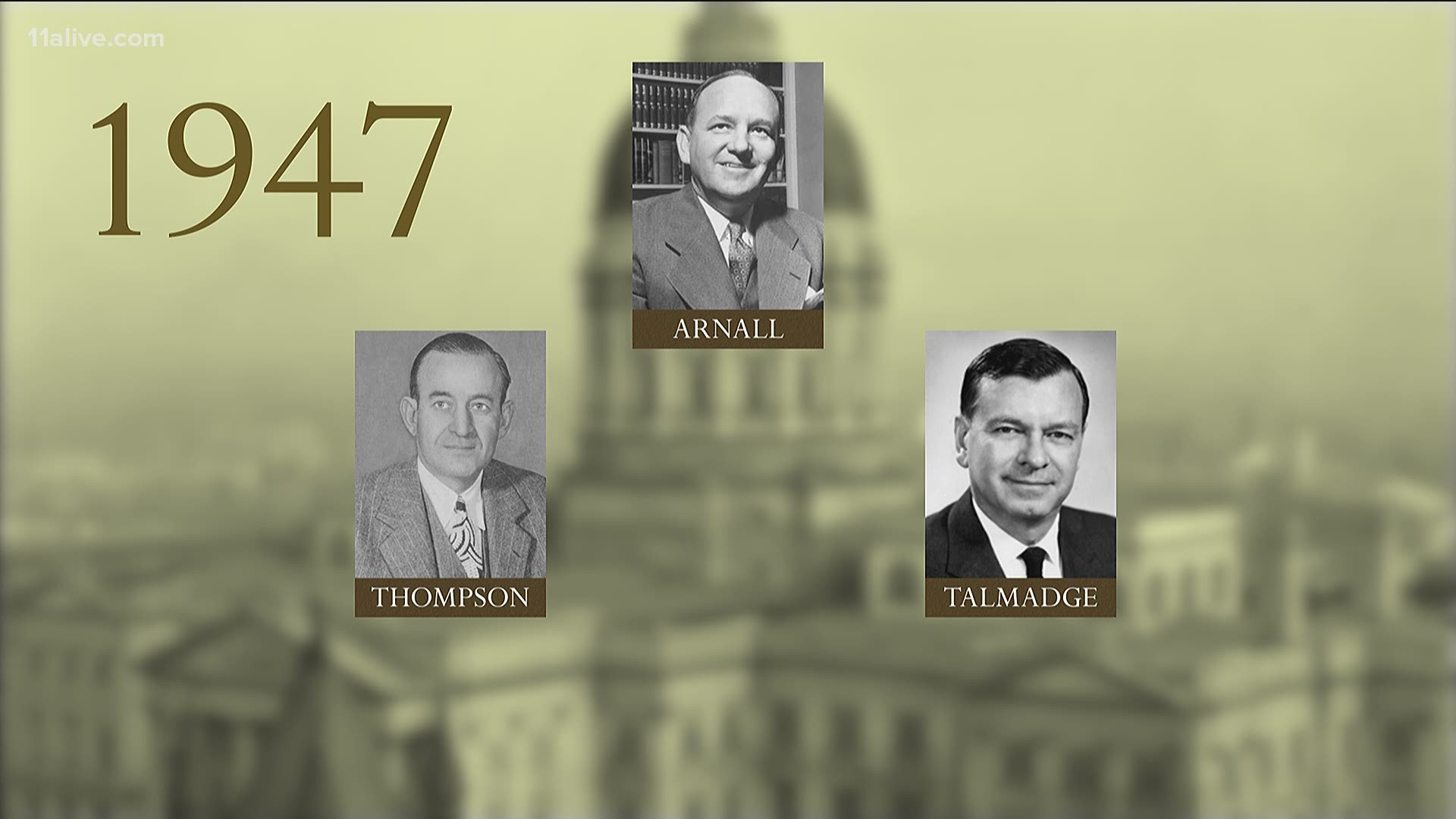 ATLANTA — If the presidential transition gets rough in January, one can look to Georgia for precedent --  for better or worse.

In the middle of the 20th century, three men claimed to be governor of Georgia at the same time. It was a national embarrassment that took more than 60 days to reconcile.

The story starts with Eugene Talmadge, a legendary figure in Georgia politics, a Democrat, and a White supremacist with an almost cult-like following.

"He was a dominant figure in Georgia politics for a generation," added Dr. Charles Bullock, a UGA political scientist who wrote a book called 'The Three Governors Controversy: Skullduggery, Machinations and the Decline of Georgia's Progressive Politics.'

In 1946, Talmadge won his fourth election as governor. However, his health was poor. He died before he could take office.

That triggered a controversy known as the three governors. It played out in newsreels shot at the State Capitol,  when three men, at the same time, claimed to rightfully occupy the office of governor.

Just so happens that prior to the 1946 election, Georgia created the office of Lieutenant Governor.  Melvin Thompson was the first to win it.

When Gene Talmadge died, Thompson claimed the governorship.  A newly-written state constitution was explicit about the new Lt. Governor taking office upon the death of a seated governor, but less so about a governor-elect.

RELATED: Georgia Sec. of State writes he's being 'thrown under the bus' by Trump

Members of the Georgia House and Senate had other ideas.

"The Talmadge machine had been out of office for eight of the previous 10 years.  In '46, they’re desperate to get back into power," Bullock said.

The legislature had the power to ratify the election. Talmadge’s followers wanted Gene Talmadge’s son, Herman Talmadge, to become the governor of Georgia.

The atmosphere became raucous as the legislature convened in January 1947.

"There's a lot of drinking going on" Bullock said. "A lot of the Talmadge forces and anti-Talmadge forces set up sort of 'medical units' to keep members sober so they’ll be able to vote.

During the 1946 November election, Gene Talmadge had run unopposed. Republicans didn't field a candidate for governor in Georgia until 1966. But as Talmadge's health began to fail, some followers quietly started a campaign to accumulate write-in votes for Herman Talmadge.

Backers said the write-in votes gave Herman Talmadge legal standing to be considered when the legislature ratified the election.

The legislature voted to anoint Herman Talmadge as Governor.  Lt. Governor Thompson took it to court.  And the outgoing governor, Ellis Arnall announced he wouldn’t leave office until the dispute was resolved. All three men claimed the governor’s office.

Arnall had the backing of an attorney general's opinion, which said the governor should yield the office only after a successor is legally chosen and sworn in.

On January 16, 1947, Herman Talmadge’s backers managed to seize the governor’s office. They changed the locks on the doors, barring Arnall and his staff from entering.

"Herman Talmadge had so much support in the legislature that he had people well-planted in the Capitol who basically let him in the office," Teper said.

Ellis Arnall set up a government-in-exile in a kiosk in a hallway. The kiosk is still there -- outside the governor’s office.

Talmadge "claims office merely by inheritance. And Georgia is not a monarchy – yet," Arnall is seen saying in newsreel footage shot at the time.

Meantime, the Capitol was in chaos as Talmadge and Thompson both made appointments to jobs in Georgia’s bureaucracy. After two months, the Georgia Supreme Court ruled that Thompson, the newly elected Lieutenant Governor, was in fact the rightful governor.

"It was very weird," said Teper.  "Everybody in the country was talking about the three governors controversy in Georgia. In fact they were talking about it around the world."

In the same newsreel, a narrator with a British accent is heard saying "to read reports of the dispute, you’d think everyone is a governor down in Georgia."

After 63 days, Herman Talmadge stepped aside. He began plotting what would become a successful run for governor in the next election, launching his own 30-year career in politics.

There’s a statue of him across from the Capitol. There’s also a statue of Gene Talmadge, the winning candidate who died – and a statue of Ellis Arnall, who tried to govern from a hallway.

But there is no statue on the grounds of Melvin Thompson – the governor who actually prevailed in this most peculiar Georgia story.