Touting infrastructure reforms in Atlanta, Trump promises I-75 will be 'one of the first projects accelerated' 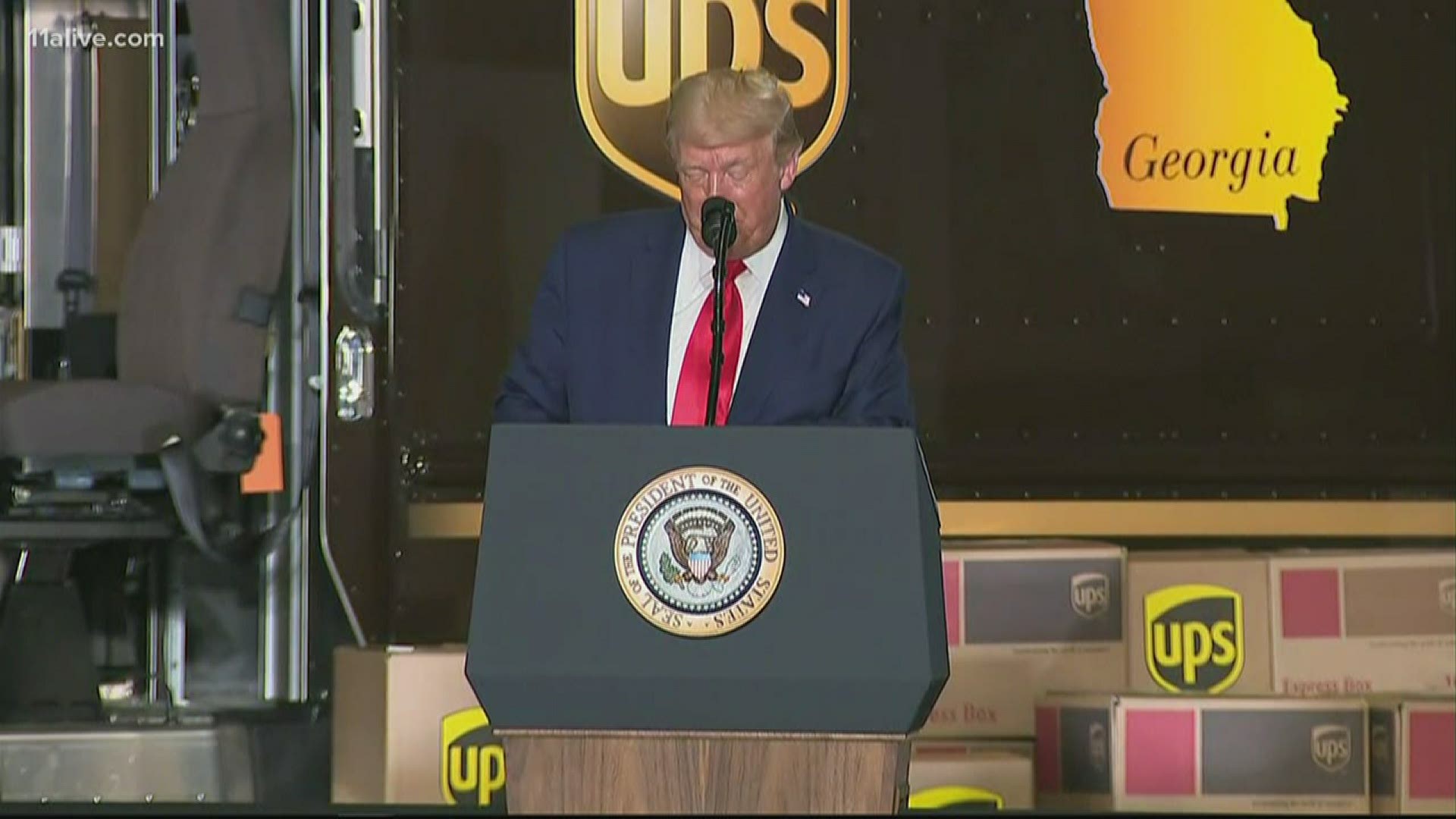 ATLANTA — President Donald Trump championed a series of infrastructure reforms in Atlanta Wednesday afternoon, largely aimed at scaling down the bureaucratic process for large projects to get environmental approval.

The White House says the reforms of the National Environmental Policy Act will "modernize and accelerate environmental reviews," and the president highlighted I-75 as a signature example of what he believes the reforms will accomplish.

A nearly-$2 billion expansion of Interstate 75, to establish lanes solely for trucks and other commercial vehicles, was proposed more than two years ago with the promise that it would alleviate some of Atlanta's notorious traffic congestion.

The project has not gained much steam since then, but the president said Wednesday his new policies will finally bring it to fruition.

"One of the first projects accelerated by these reforms will be the planned expansion of I-75 right here in the Georgia ... they’ve been looking to do that for many years, right?" the president said. "This expansion will add 77 new lane miles for commercial vehicles, like those driven by UPS, saving drivers countless hours a year."

The I-75 Commercial Vehicle Lanes project, according to the Georgia Department of Transportation, would involve "constructing two barrier-separated commercial vehicle-only lanes northbound along I-75 from approximately the I-475/I-75 Interchange near Macon to the McDonough area. The new lanes will be non-tolled and span across five counties: Henry, Spalding, Butts, Lamar, and Monroe."

The president brought on stage a local UPS driver, Julian Paulk, who spoke of how the roughly 100-mile round-trip from Macon to McDonough, a heavily trafficked commercial route, would be improved.

"Every time I've loaded my truck, whether it was medical equipment or a gift to a loved one, that time in transit was very important," he said. "So this infrastructure is very important to me and all of my fellow UPSers."

Georgia Department of Transportation Commissioner Russell McMurry also said the project would make it easier "to move that freight out of Savannah to Atlanta and beyond, while providing a safe corridor for the many families that travel on I-75."

Trump also touted his administration's work to accelerate the expansion of the Port of Savannah, which he said would be another beneficiary of the relaxed environmental review rules. With what he called three straight years of full funding for the project, planners are now "on track to complete the project in a very short period," he said.

The president also promised big "surprise" projects that would now be done in Georgia.

"In Georgia you're going to have infrastructure projects announced that almost all of the people in this room do not know about, most people had given up on them, but we have some things planned in Georgia that'll be really incredible," he said.

According to the Associated Press, the National Environmental Policy Act is a 1970 law which "changed environmental oversight in the United States by requiring federal agencies to consider whether a project would harm the air, land, water or wildlife, and giving the public the right of review and input."

Environment advocates have said that the president's reforms will dismantle protections embedded in the "only law that gives frontline communities a chance to weigh in on federal projects that could impact their health and safety."

"Curtailing NEPA makes no sense in normal times; now, it’s devastating, especially for communities of color who are often targeted by dirty or dumb projects," an article on the website of the Natural Resources Defense Council said Wednesday. "NEPA sets out a simple yet profound standard: Before the government can take any major action, it needs to assess the impact of the project, inform the public of its plans, consider other options, and open up its proposal to public comment."