Here are what Georgia lawmakers said during the Trump impeachment debate

As members of the U.S. House debated whether to support or oppose impeaching President Trump, this is where Georgia's representatives in the House were falling. 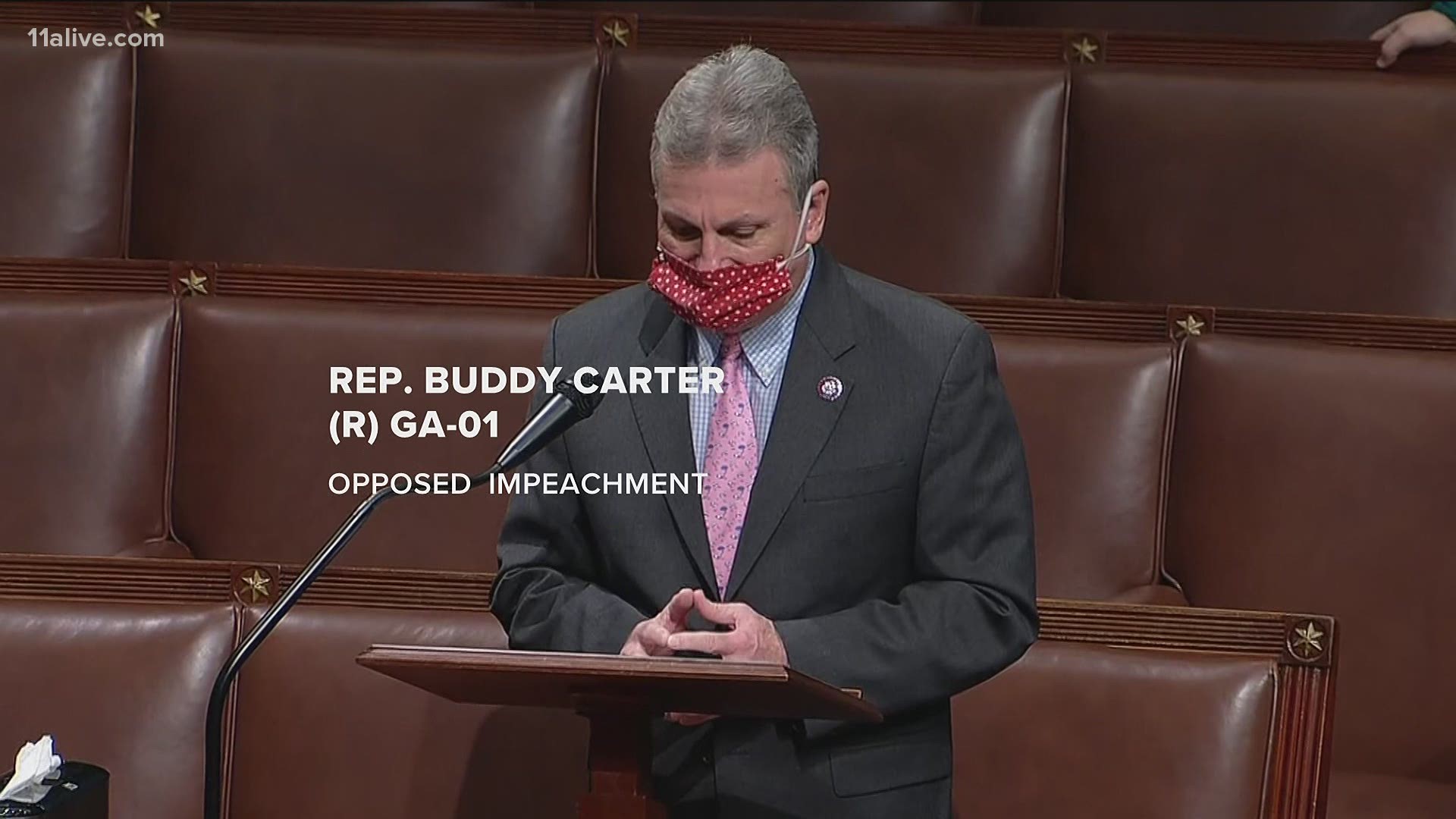 ATLANTA — Members of the U.S. House of Representatives debated the article of impeachment against President Donald Trump, and voted later to impeach him a second time during his presidency.

With the Democrats in control of the House, it was expected Trump would be charged with "a high Crime and Misdemeanor against the Nation" for "inciting an insurrection" after a mob of his supporters sacked the U.S. Capitol last week.

As lawmakers debated whether to support or oppose that charge, seven of Georgia's 14 U.S. Representatives rose to speak.

"I rise with a heavy heart for what our nation has endured.

"All those who've incited an attack on these halls of freedom must never forget that in every generation, Americans of all colors and creeds have laid down their lives in the struggles against tyranny, the fight against fascism and the defense against those who would betray the values upon which this nation was founded.

"It is our duty to shoulder that defense of our democracy here today. The president's actions have laid bare his contempt for our Constitution and he must be removed."

"President Trump has held over 600 rallies in the last four years, none of them included assaulting police, destroying businesses or burning down cities.

"Democrats have spent all this time endorsing and enabling violent riots that left billions in property damage and 47 dead across the United States.

"Democrats are on record supporting violence when it serves their cause - in their own words, on social media, in interviews and on fundraising platform ActBlue.

"Democrats will take away everyone's guns just as long as they have guards with guns.

"Democrats' impeachment of President Trump today has now set the standard that they should be removed for their support of violence against the American people."

"I'm certain that every member of Congress would say that if they had been in Congress when John Lewis walked across that Edmund Pettis Bridge and the Civil Rights Act was passed, that they would have stood on the right side of history.

"Well, Madam Speaker, today we're going to see exactly what side of history you all are going to be on."

"What happened on Wednesday, January 6 was nothing short of pure anarchy, and those individuals who broke the law should be held accountable for their actions they should be prosecuted to the highest extent of the law and they should be put in jail.

"This was one of the saddest days of my life last Wednesday. Our thoughts and our prayers are with the police officers and other law enforcement who carried out their duties on that tragic day, including Officer Sicknick and Officer Liebengood.

"Right now our focus should be on healing - healing our nation. With so many upset and dismayed at the actions of last week, it's our responsibility to chart a path forward to subdue the growing animosity and find ways to heal our country.

"Unfortunately I don't believe this resolution will achieve those goals, especially seven days ahead of the inauguration. This is a very serious and concerning effort during such a tense and fragile time in our country. I urge my colleagues to consider how this will further entrench people during such a tense time. I cannot support this resolution."

"Madam Speaker, let me make everybody aware that on those sun-bleached bones of history, of many great nations are written those pathetic words: 'Too late.'

"I rise today in opposition to the effort to impeach President Trump.

"This course of action will only increase dissent and disunity across our country, and it flies in the face of all efforts to heal our nation.

"Quite simply, it is a shameful final act of political retribution - retribution this president has weathered since Day 1.

"I have no doubt that those who breached the Capitol will have due process and their day in court. However there will be no investigation in the people's House into whether the allegation against the president meets the criteria for a crime worthy of impeachment.

"No evidence was presented, no witness testified, no cross examination was conducted, no due process was afforded, and that sets an extremely dangerous precedent for the future.

"If my Democratic colleagues were serious in their efforts to get to the truth, they would convene the House Judiciary Committee and investigate, but they are not.

"And so I am proud to stand before you today to defend our president from the injustices my Democratic colleagues are so giddy to pursue. I oppose this effort to impeach the president and ask all members of the House to do the same."

"I teach a civics class where I point out that our democracy is not self-executing. It requires people of good faith and ethics to make it work.

"The president has repeatedly challenged Georgia's election results. But despite three recounts and many investigations, the results are clear: Joe Biden won Georgia.

"The idea that our election was fraudulent is a lie. Our president used this lie to incite a violent mob to attack the Capitol.

"I ask my colleagues to act with ethics and good faith to reject these lies, and in this case to support the article of impeachment."