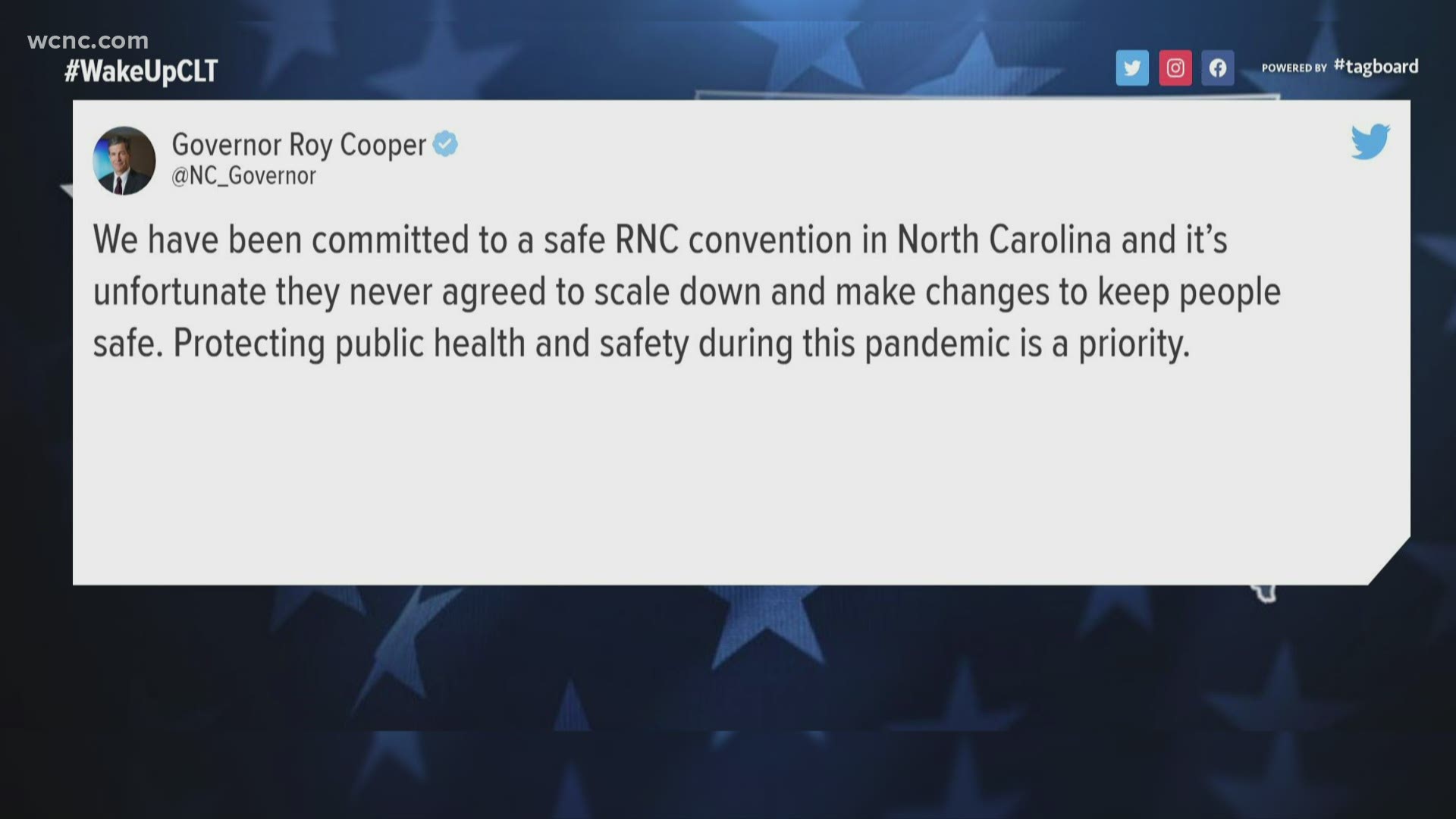 CHARLOTTE, N.C. — The Republican National Convention could be on its way out of Charlotte after Governor Roy Cooper rejected the GOP's request for a full-fledged convention in Charlotte come August.

President Donald Trump tweeted late Tuesday night that he is forced to seek another state to host the RNC after Cooper said he couldn't guarantee a full capacity convention. Republican leaders were hoping to have 20,000 people without masks at Spectrum Center. Cooper denied that request and said the RNC could only move forward with safety measures in place due to COVID-19.

"Had long planned to have the Republican National Convention in Charlotte, North Carolina, a place I love. Now, Roy Cooper and his representatives refuse to guarantee that we can have use of the Spectrum Arena - Spend millions of dollars, have everybody arrive, and then tell them they will not be able to gain entry," Trump wrote on Twitter. "Governor Cooper is still in Shelter-In-Place Mode, and not allowing us to occupy the arena as originally anticipated and promised. Would have showcased beautiful North Carolina to the World, and brought in hundreds of millions of dollars, and jobs, for the State. Because of Gov. Cooper we are now forced to seek another State to host the 2020 Republican National Convention."

Had long planned to have the Republican National Convention in Charlotte, North Carolina, a place I love. Now, @NC_Governor Roy Cooper and his representatives refuse to guarantee that we can have use of the Spectrum Arena - Spend millions of dollars, have everybody arrive, and...

“Due to the directive from the governor that our convention cannot go on as planned as required by our rules, the celebration of the president’s acceptance of the Republican nomination will be held in another city. Should the governor allow more than 10 people in a room, we still hope to conduct the official business of the convention in Charlotte.”

Gov. Cooper responded to President Trump's tweets saying protecting public health and safety during this pandemic is his first priority.

We have been committed to a safe RNC convention in North Carolina and it’s unfortunate they never agreed to scale down and make changes to keep people safe. Protecting public health and safety during this pandemic is a priority.

NC GOP NC GOP Chairman Michael Whatley told WCNC Charlotte's Savannah Levins that if Gov. Cooper came back and agreed to a full capacity convention, then they would keep the RNC in Charlotte.

"Everybody would welcome that right now, but he does not seem inclined to want to do that in any way shape, or form," Whatley said.

Whatley mentioned that the RNC is now considering whether or some component of the RNC will be held in Charlotte.

"Is there going to be any component of the convention that's going to stay or is the whole thing going to be moved out and we'll have to work through that," Whatley exclaimed.

According to Whatley, the RNC has been disappointed in the lack of communication with the Governor in terms of what he would need to hold a safe convention in Charlotte.

Whatley explained that losing the RNC is going to be a huge economic blow for the city of Charlotte.

"This is going to be an absolutely staggering blow, especially when you consider that we're still under lockdown right now. And we need this economic boost," Whatley said.

He also mentioned that the city has been planning for the August convention for the past year now. Whatley mentioned that business owners have already spent money getting ready for the RNC.

"If you think about it, this puts a black eye on our city in general for other large scale events political or otherwise," Whatley said.

Whatley also told WCNC that the RNC is willing to follow federal and CDC guidelines, but thinks where North Carolina stands now in phase 2, is too restrictive.

Gov Cooper said he can't say for sure if restrictions would be loosened by August.

"Losing the Republican National Convention is a devastating economic blow to the Charlotte region and North Carolina as a whole. Restaurants, hotels and service workers across multiple industries were counting on this business, especially after the major hit they've taken from Gov. Cooper's COVID-19 restrictions. Gov. Cooper has delivered a clear message that North Carolina is not open for business, and the repercussions to jobs and livelihoods will be long-lasting. When other states' 'science and data' shows that it is safe to host a convention in August, it is clear the Cooper Administration is playing politics."

In response to Governor Cooper's reply, GOP Chairwoman Ronna McDaniel said what was "unfortunate" was that Governor Cooper didn't provide specifics on what a "scaled down" RNC would look like.

What’s unfortunate is that you still have yet to give guidance on what “scaled down” means. Currently, you allow 10 people to gather indoors. Is that what scaled down means? Or is it 100 people? 1,000 people? Total lack of clarity from you. https://t.co/4ceHrGRGu3

Tuesday afternoon, Gov. Cooper sent an email to the RNC committee saying a full convention in August is unlikely.

“The people of North Carolina do not know what the status of COVID-19 will be in August, so planning for a scaled-down convention with fewer people, social distancing and face coverings is a necessity,” Cooper wrote in a letter.

"I'm grateful for Governor Roy Cooper's strong and responsible leadership,"  Charlotte City Councilwoman Dimple Ajmera said in a statement. "North Carolinians are not going to be bullied by Mr. Trump."

.@realDonaldTrump, I am heartsick for Charlotte as we pay the price for @RoyCooperNC’s incompetence.

Some governors managed tough COVID outbreaks to success. Cooper started with a modest problem and created a disaster. He left you no choice but to say “YOU’RE FIRED.” #ncpol https://t.co/uDyxOo9BNh

President Donald Trump sent a series of tweets May 25 threatening to relocate the Republican National Convention if the governor's COVID-19 phased reopening plan would not allow full attendance at the event.

In a response to those tweets, Cooper said his administration was awaiting proposed, operational guidelines from the Republican National Committee.

Thursday, the RNC proposed guidelines and called on Cooper to lead the charge.

WCNC Charlotte previously took the RNC contract with the City of Charlotte to an attorney to see what options could be on the table. We also wanted to know what the financial penalties would be if the convention was relocated.

The contract between the City of Charlotte, the RNC Host Committee, and others is 94 pages long. It was written years before the pandemic, therefore, there's not a pandemic clause.

RELATED: 'Within a week, certainly, we have to know' | President Trump says Gov. Cooper must make a decision on the RNC

After President Trump's tweet on Tuesday night referencing moving the RNC, the City of Charlotte responded on Twitter saying they had not heard from the Republican National Committee of any such move.

We have a contract in place with the RNC to host the convention and the City Attorney will be in contact with the attorneys for the RNC to understand their full intentions.

When asked by reporters if RNC officials are visiting Nashville as a potential place to hold the RNC, Tennessee Gov. Bill Lee: “I can’t tell you their particular plans.  Somebody in my office might be able to. I think they’re coming Thursday to tour the city.”

“Well, I can tell them that Nashville is the best place in America to have a convention, and, uh, we certainly would be interested in welcoming that to our city.  It would be a great opportunity for us to build upon the economic recovery that’s already occurring,” Lee went on to say.

Gov. Lee said they are in the early stages of conversations and hasn’t personally spoken to RNC officials but his office has.

RELATED: RNC calls on Governor Cooper for answers on 2020 convention