Two ads, one from incumbent Sen. Cory Gardner and one from the NRSC, go after John Hickenlooper - though the Democratic primary isn't over. 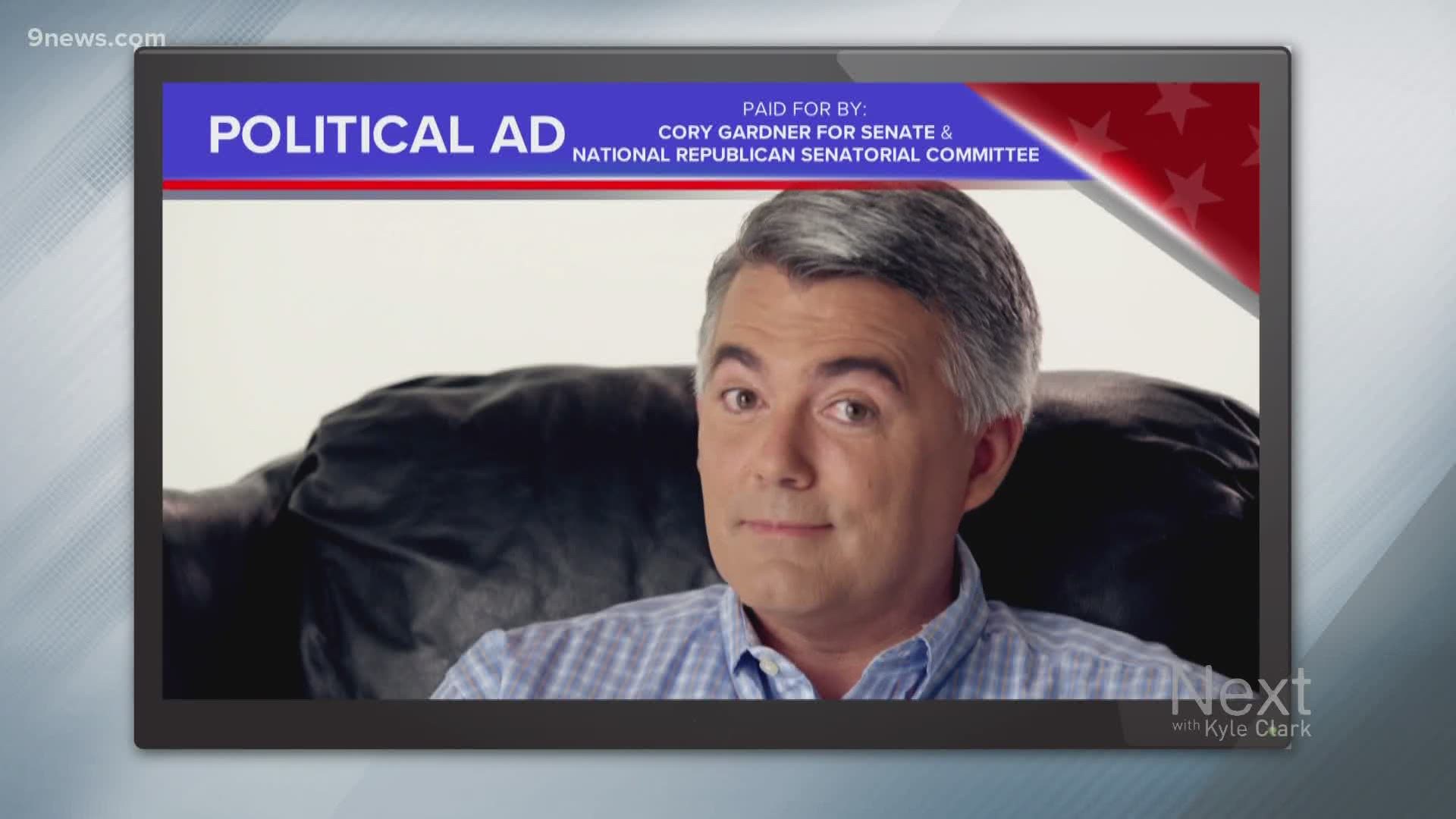 DENVER — He doesn't have a primary opponent, but Republican Sen. Cory Gardner has produced a political ad focusing on Democratic candidate John Hickenlooper ahead of the June 30 election.

Voters in Colorado will pick between Hickenlooper and the other Democratic candidate, Andrew Romanoff, in two weeks.

The winner will face Gardner in the November 3 general election.

Two ads just started airing, one paid for by Gardner's campaign, in conjunction with the National Republican Senatorial Committee (NRSC) in Washington D.C., and the other ad is paid for solely by the NRSC.

The ad uses Hickenlooper's own words, said while he was running for president and repeatedly answering why he wasn't instead running for U.S. Senate.

CLAIM/HICKENLOOPER IN AD: "Being Senator would be meaningful, but I'd hate it."

"It would be a huge sacrifice."

"It wouldn't bring me any kind of satisfaction or delight."

Hickenlooper said all of those comments when answering a question about running for Senate instead of president. The first and last quote were from an interview on MSNBC with David Gura that aired on May 4, 2019. The second quote is from an interview conducted by then-Buzzfeed Editor-in-Chief Ben Smith during SXSW in Texas on March 5, 2019. The third quote was during a campaign stop in Iowa on July 7, 2019. The fourth quote was from a National Press Club event Washington, D.C. on June 13, 2019.

After Hickenlooper ended his presidential campaign and announced he was, indeed, running for U.S. Senate, he appeared on Next with Kyle Clark on Sept. 5, 2019, and was asked if he hired people who said they didn't want the job and wouldn't be good at it.

"I certainly hired people who that had originally thought they would be good at something, but they had to demonstrate to me, A) that they had the passion for it, but B) that they were able to take the skills they did have and transform them," said Hickenlooper.

CLAIM/GARDNER IN AD: "I'm Cory Gardner. I work hard to be effective, with both parties."

The Gardner campaign and NRSC did not provide information to back up Gardner's claim. However, in May, Gardner sent out a news release touting his placement in the "Bipartisan Index," a ranking compiled by the Lugar Center and McCourt School of Public Policy at Georgetown University.

The index is not easily described, but it looks at the following to determine an overall bipartisan ranking:

In 2019, Gardner was ranked the third most bipartisan Senator behind Republican Sen. Susan Collins (Maine) and Sen. Lisa Murkowski (Alaska).

In 2017-18, Gardner was ranked fifth. That Congressional session was the first two years for President Trump.

This ad, paid for solely by the National Republican Senatorial Committee, uses journalists to highlight Hickenlooper's recent ethics investigation and determination that he violated the state's gift ban while governor.

The Independent Ethics Commission issued Hickenlooper a subpoena to testify in his ethics hearing on June 4. He challenged that subpoena in court and did not appear on June 4. The commission voted to have the Colorado Attorney General's Office go to court to enforce the subpoena. Before a judge agreed to enforce the subpoena, Hickenlooper's attorney said he would comply and appear to testify on June 16. He ultimately appeared and testified on June 5.

Hickenlooper was found to have violated Amendment 41 twice while governor. Amendment 41 sets the limit on how much of a gift that politicians and state employees can accept. In 2018, that limit was $59. The commission found that, on two occasions, Hickenlooper received a benefit greater than the $59 limit allowed.

Alan Gionet (CBS4): "The first person ever to be held in contempt by the state's independent ethics commission."

VERDICT: True, but needs clarification. The ad could be understood to mean that he was found to have violated the state's gift ban six times. The commission found Hickenlooper to have violated the state's gift ban on two of the six allegations. One was a trip on a private jet to the commissioning of the USS Colorado in Connecticut. The plane was owned by homebuilder and MDC Holdings chairman Larry Mizel. The other violation was for a trip to the Bilderberg Meeting in Italy. Hickenlooper said he thought he paid for all benefits he received on the trip, but the commission determined he did not, including private security and a Maserati limousine ride to the airport.

VERDICT: Wrong. Guilty is incorrect terminology. This was a civil case and not a criminal case. He was found to have violated the law.

Kyle Clark (9NEWS): "Broke the law while in office."

He violated Amendment 41 twice while governor.

Narrator: "John Hickenlooper. He lied. He broke the law. And it gets worse."

VERDICT: This is messy.

He lied? That requires intent. In legal filings, Hickenlooper defended his trips that were subject to the ethics commission complaints. He said he did not believe he violated the state's gift ban. The commission found otherwise on two occasions. Is that a lie? We don't have enough information.

He broke the law. Yes, that's true. He violated Amendment 41.

It gets worse? That's a matter of opinion. The NRSC provided additional information, pointing to the $127,000 taxpayers have spent on Hickenlooper's legal defense. That's not new information. We've been reporting on that and updated the dollar amount on June 12.

SUGGESTED VIDEO: Next with Kyle Clark