The vice president is in town today to meet Gov. Brian Kemp and restaurant industry leaders. 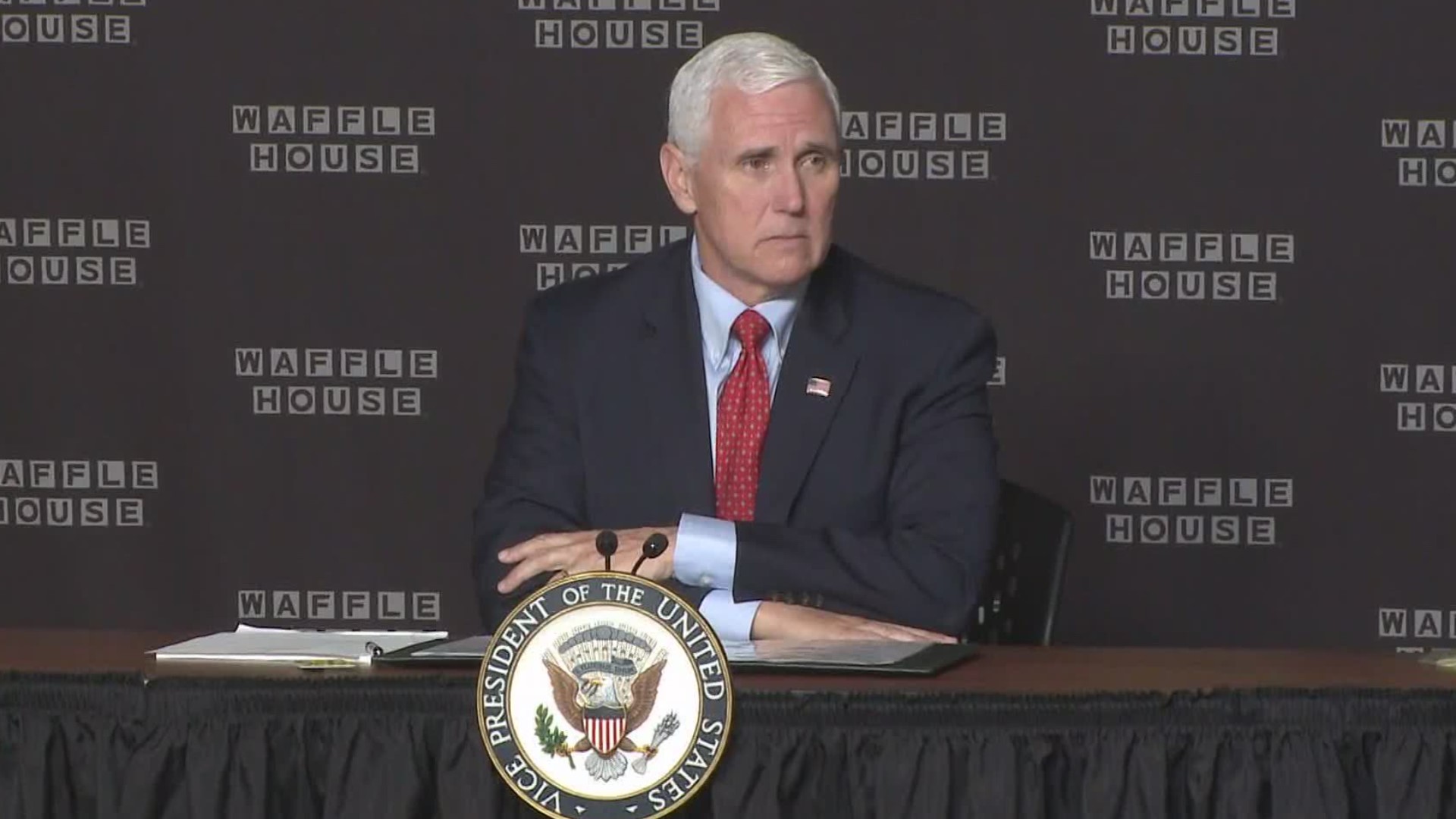 MARIETTA, Ga. — The Vice President is back in Washington after spending Friday in metro Atlanta. He came to see how Georgia is doing three weeks after the state began to reopen.

During his visit with Gov. Brian Kemp, Pence participated in a round-table discussion with restaurant executives at Waffle House's headquarters near Norcross.

The restaurant industry, hard hit by the pandemic, was a focus of the conversation, as well as the important Paycheck Protection Program passed in Congress to help businesses stay afloat.

During the discussion, restaurant owners discussed how they have managed to stay in business and reopen during the pandemic.

Watch the full round-table below.

Since the state's reopening, revenue is back up, with Waffle House able to re-hire 2,000 Georgians.

Vice President Pence praised Georgia and said the state is setting the example for reopening.

The tone of Pence's comments marked a drastic change from President Donald Trump several weeks ago, who at one point criticized Kemp for perhaps reopening too soon.

After the roundtable, a reporter asked Kemp if he felt vindicated to receive Pence's praise, after being criticized by Trump.

"I will let history be the judge of what ends up being right and wrong," Kemp said. "I believe every governor, just like the president and vice president is making the best decisions with the information and data that they have. Sometimes I've had local elected officials disagree with what I'm doing, but I haven't been critical of them because I believe they're doing what is in their best interests. They're governing their local community, I'm governing the state and the president, vice president, and (White House coronavirus) task force are trying to deal with the whole country."

The Georgia restaurant owners on hand Friday said the managed to stay in business during the pandemic, and most kept many if not all of their employees.

Each credited federal funding through the Payroll Protection Program, or PPP, for allowing them to stay afloat.

Pence gave his word he is working to extend the window of time owners have for using PPP loans, as right now, businesses need to spend their loans in eight weeks; there are calls to increase that window.

"I'm looking at one of your senators and one of your congressman, and they can confirm we are looking at a possible phase-four bill that would include a number of things, but before that, we are working with members of Congress of both parties to extend Paycheck Protection for just the reasons you have said. The President has made it a priority and we are working on it in real-time," Pence said.

The senator and congressman Pence referred to in his comments were Senator Kelly Loeffler and Rep. Doug Collins.

The two republicans attended Friday's round-table and were in assigned seats at opposite ends of the room. Loeffler is running to keep her Senate seat, appointed to her by Kemp. Collins is challenging her.

11Alive asked both Loeffler and Collins about Congress' work on extending the PPP.

"There is a will to do something to extend PPP," Loeffler added. "When we set the parameters on PPP, we didn't know the duration of what the shutdowns would be. Now we know, we can go back and re-look at that."

On the topic of restaurants, Kemp said, including grabbing lunch with Pence at an Atlanta restaurant Friday, he has dined at Georgia restaurants three times in the past two weeks, and on a fourth occasion picked up food to-go.

Based on reports he is receiving, the governor expects restaurants along Georgia's coast will be busy for Memorial Day weekend.

"The hotels are booked down there," Kemp said. "Which is great for those hotel owners and their employees. I feel like restaurants are going to have a big weekend. I feel like they will be very busy, but I also feel like there will be people that aren't comfortable dining in, they will pick-up or cook at home and that is okay, too. We have to keep easing back into this."

Kemp added his office has been working this week to make sure business owners in the coastal area understand the guidelines and rules for being open.

President Trump lashes out at scientists whose findings contradict him