The crowd erupted when Future made his grand entrance and greeted attendees. Future also spoke to the eager crowd of children and gave away raffles that included iPads, Xbox game systems, bicycles and a chance to take pictures with the superstar! 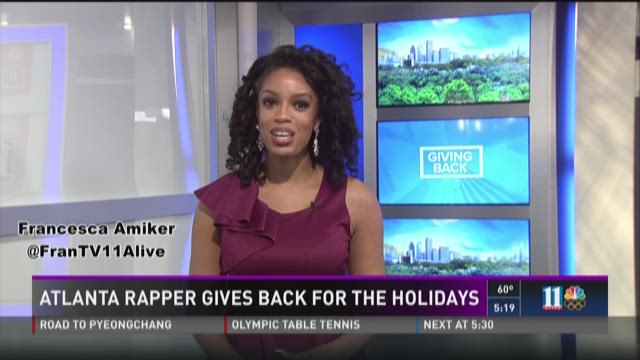 Over the weekend more than 600 families in the Atlanta metro area were treated to an afternoon filled with holiday joy and gift-giving all thanks to a foundation that is close to Atlanta rapper Future’s heart. The FreeWishes Foundation presented its 5th Annual Winter Wishland Extravaganza at Bessie Branham Park in Kirkwood.

Lines were wrapped around the park awaiting entry to the most anticipated holiday charity event of the year. When doors opened, hundreds of families were wowed by the winter wonderland transformation of the Bessie Branaham gymnasium. Kids walked into a production filled with giant nutcracker statues, a station to decorate Christmas cookies, a musical picture booth with Santa and Mrs. Claus, access to Santa’s toy shop filled with mounds of electronics, bikes, game consoles and more. Each child was gifted with a brand new coat and toys to take home! The families also received customized hoodies donated by Freebandz Touring.

The crowd erupted when Future made his grand entrance and greeted attendees. Future also spoke to the eager crowd of children and gave away raffles that included iPads, Xbox game systems, bicycles and a chance to take pictures with the superstar!

In addition, families enjoyed free food and drinks, a special musical performance by the Atlanta Music Project, dancing by the Kali Dance Studio and they were even able to win huge raffles by participating in the annual dance competition!

This year marked 5 years of philanthropic efforts in the community for the FreeWishes Foundation founded by mother and son duo, Future and Stephanie Jester.

“We are truly humbled to be able to give back to so many deserving families. Future and I are completely filled with joy when we see so many smiling faces from the mothers, fathers and children", said Stephanie Jester, President and co-founder of FreeWishes Foundation.

Families at the event were blown away by the realistic and detailed Winter Wonderland created by local business, Monte Carlo Productions. Event designer, Jasmine George told 11Alive the event was one that touched her heart.

"We were excited to work with FreeWishes Foundation. Anyone that gives back to the community is doing a great thing and we look forward to working with them in the future," George said.

The FreeWishes Foundation delivers a message of hope, perseverance and resilience to our communities by lending support and making dreams come alive and wishes come true!

To continue the conversation follow @freewishesfoundation and @Future on social media platforms and use the hashtag #FreeWishes or #FreeWishesFoundation.