Regulations for scooter use, parking up for debate in Atlanta

A public hearing on where scooters should be parked and where people can ride them is scheduled to happen Tuesday, Nov. 13 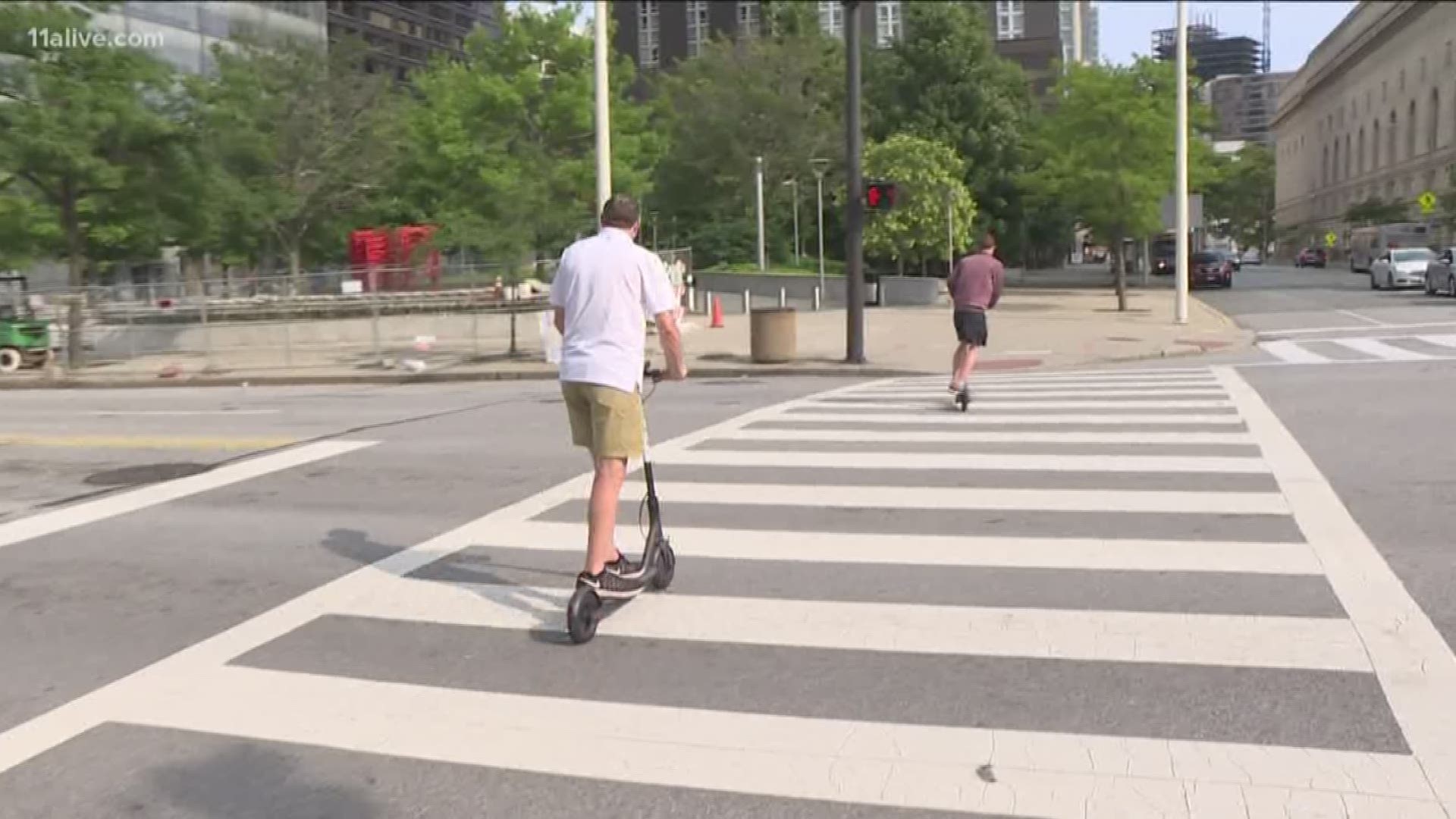 Dockless scooters generate buzz up throughout Atlanta -- a lot of people enjoy using Birds, Lime Wire and other scooters to get around, but others have expressed dismay about where people ride and park them.

The Atlanta City Council’s Public Safety and Legal Administration Committee will host a public hearing on proposed new rules on dockless scooters during a public hearing at 3 p.m. on Tuesday, Nov. 13.

Companies that operate within Atlanta city limits will have to limit scooter speed to 15 mph, according to the proposed regulations. They would be required to properly educate users on where they can ride them and encourage riders to wear helmets. When it comes to parking -- scooter users will be required to leave them upright and not in the grass, a bike lane or anywhere they obstruct wheelchair or pedestrian access.

Scooters would have to be parked in a bike rack or against a building, providing at least 5 feet of clearance for pedestrians at all times. People won’t be allowed to park leave them on vegetation, in any loading zone, driveway or lane of travel.

The scooters will also not be allowed to be parked anywhere that could block wheelchair accessibility, including benches, parking pay stations or crosswalks.

These proposed rules would be enforced by the Atlanta Public Works Department.

If the city links consistent parking problems back to one scooter company, the company could be forced to cut down on the number of scooters they operate, or get their permits revoked altogether.

Under the proposed laws, the city could also confiscate bikes found in the grass or right-of-way at the operator’s expense.

RELATED: Lime says it recalled some scooters over fears the battery could catch on fire

Companies that operate over 500 scooters will pay a $12,000 per year licensing fee, and fines for breaking scooter laws could cost companies up to $1,000 per day in fines.

A representative from Bird, one of Atlanta's largest scooter companies, told the city council in July that it had nearly 39,000 riders.

Bird scooters are dockless and can be parked anywhere. The user is supposed to park the scooter and then upload a picture to the Bird app of the scooter properly parked at the end of their trip.

But, on Instagram, users can find a couple hundred posts under the hashtag #scootersbehavingbadly with scooters from Bird and a variety of companies blocking sidewalks and other right-of-ways around the country.

This week, Bird launched "Community Mode," which will be available to Atlanta riders within the next few weeks. This will help users send feedback about parking issues and damaged cars and Bird scooters directly to the company.

"We want to look and see what are the safest options for our citizens," Councilman Michael Julian Bond said in July. "Because the demand is there, people are going to want to ride them, so we want to provide as many safe guidelines as possible."

11Alive has seen Bird riders on sidewalks and in Piedmont Park often without helmets and, in one picture the council shared, on the Downtown Connector. Birds top out at 15 mph.

Tuesday’s public hearing on scooters is scheduled for Committee Room No. 1 at Atlanta City Hall, and will go before the transportation committee after an official recommendation from the Public Safety and Legal Administration Committee.

A final vote on the proposed regulations could head to the Atlanta City Council at the Nov. 19 general meeting.