Ten years ago Thursday, in the early morning hours of March 2, 2007, a bus driving from Ohio to Florida fell over a bridge and onto Interstate 75 in Atlanta. 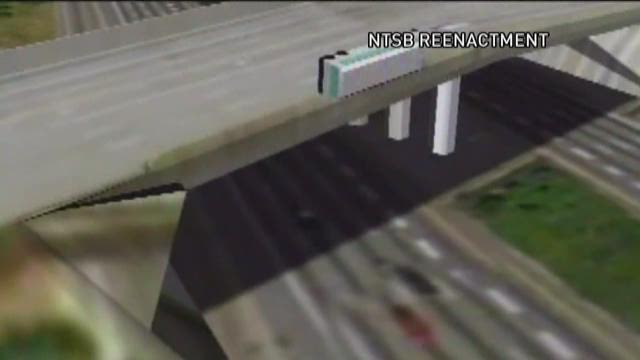 Ten years ago Thursday, in the early morning hours of March 2, 2007, a bus driving from Ohio to Florida fell over a bridge and onto Interstate 75 in Atlanta. The Bluffton bus crash remains a powerful memory a decade later, and in that time some things have changed to prevent it from happening again.

The crash resulted in the loss of seven lives and a scene unlike any other on our Georgia highways. It even shows on that bridge over I-75 today.

From the highway, you can barely see them -- the bouquets of flowers that, on this day, dot Northside Drive above I-75; bouquets with no names and no words. Just a number as a reminder.

On that day ten years ago, a bus was heading from Ohio to Florida carrying the Bluffton University baseball team.

In the dark of night, the driver mistook a left-hand HOV exit for a standard lane on the highway. He drove at highway speed onto the bridge. The bus fell over onto the Interstate. Many players went to Grady Memorial Hospital in downtown Atlanta with injuries. Seven people were killed.

PHOTOS | 2007 Bluffton University bus crash on I-75 in Atlanta

1 / 28
On March 2, 2007, a tour bus taking the Bluffton Univesity baseball team to a tournament in Florida accidentally roared up the Northside Drive HOV ramp from I-75, crashed through the guard rail and onto the pavement below, killing seven people.

“This is something that’s not going to leave the guys that were on that bus this morning," said a survivor. "This is going to be with us forever.”

People that day put flowers on the orange fencing where the bridge had been. Ten years later, flowers are just one sign of what happened.

"We have done a multitude of things since that accident," said Natalie Dale of GDOT.

That left-hand HOV exit is now littered with signs and symbols identifying it to drivers.

"We have more signage in advance of the ramp. We have more stop signage on the ramp. The stop sign at the top has that red beacon," Dale said. "There hasn't been anything similar that has happened -- no one taking the ramp, confused that they were still on I-75."

The National Transportation Safety Board set new national requirements for such exits, although advocates continue to push for better bus safety.

In northwest Ohio, on the Bluffton University campus, this day brought a memorial service on the diamond.

"You never recover fully from something like this, but what you do is you move forward," a mourner said.

And while the tragedy hit hardest in Ohio, it continues to be acknowledged in Atlanta.

Advocates in Ohio, including the parents of one of the victims, are working for stronger safety regulations for motor coaches.