The state of Georgia's current flag is based on the first Confederate National flag. 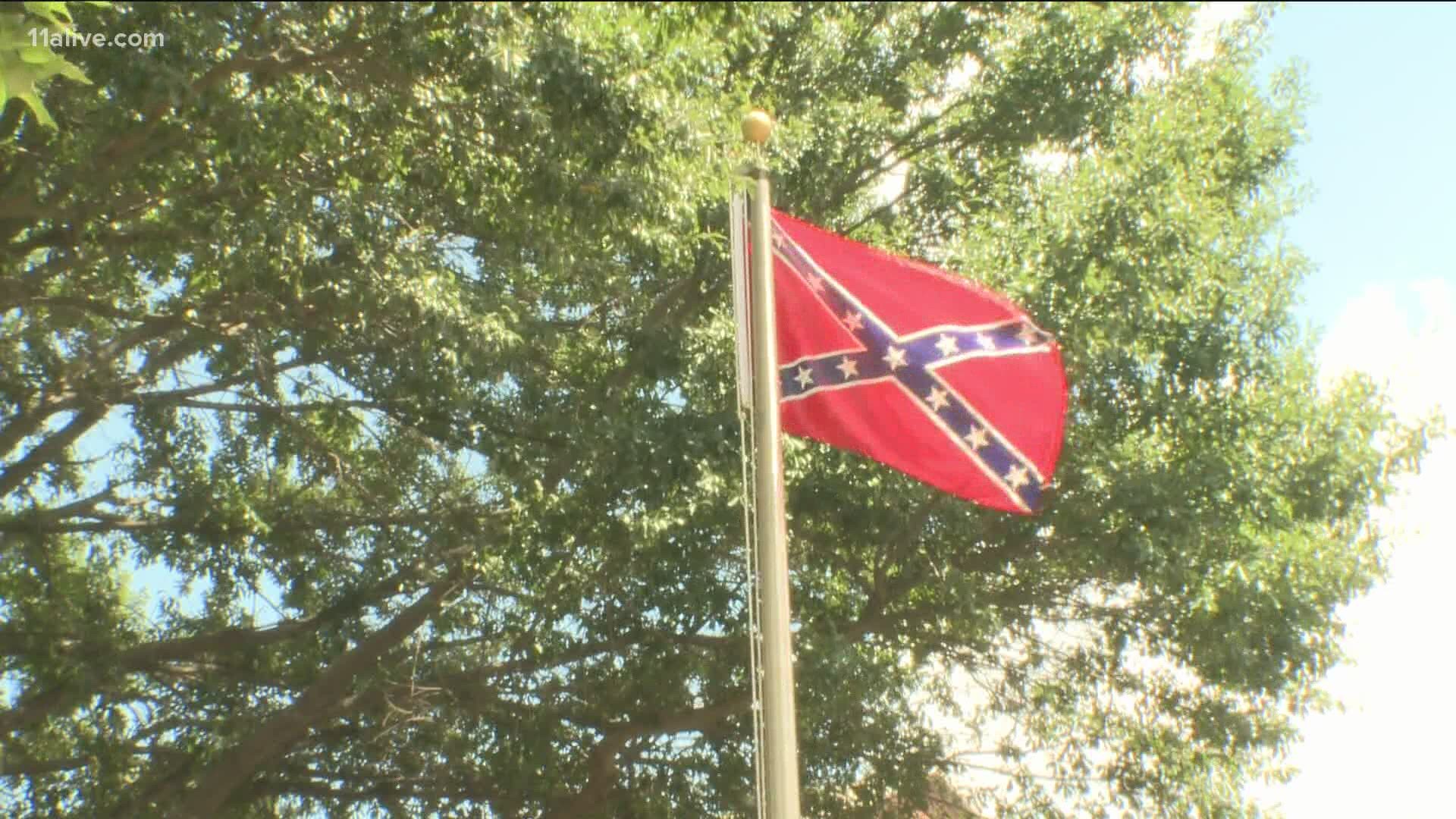 Before 1879, according to the Georgia State Senate, the only state flag was an unofficial one that was based on the official state seal. The design most likely originated from one of the many militia units in antebellum Georgia.

Georgia's current official state flag is inspired by the original confederate flag, not the one popular in modern times.

The Great Seal of the State of Georgia

The design of the Great Seal of the State of Georgia, itself, was specified in the Georgia State Constitution in 1877. The front of the seal includes an arch with three columns.

The word "Constitution" is inscribed on the top of the arch. A winding scroll runs around the three columns, inscribed with the words, "Wisdom, Justice, Moderation." This echoes the state's motto. A Georgia Militia member stands sentinel between the second and third columns, with his sword drawn. The words "State of Georgia encircle the seal above the emblem; the date "1776" runs below.

In 1861, a provision was added to Georgia state law requiring the governor to supply regimental flags to Georgia state militia units assigned to fight outside the state. The flags were supposed to depict the "arms of the State" and the name of the regiment, but the code did not give an indication of the colors to be used on the flag.

A Confederate influence can be seen in the 1879 flag, which may have come from Perry's background as a former Confederate colonel, according to the state Senate.

According to the Georgia State Senate, the 1879 flag was created by modifying the first Confederate National Flag of 1861. The Georgia flag removed the stars, extending the blue canton to the bottom of the flag and narrowing its width slightly.

A 1902 amendment by the Georgia State Assembly placed the Georgia Coat of Arms as depicted on the state seal into the blue field of the 1879 flag.

In 1904, a slight modification was made, placing the state seal into a white shield. The date "1799" was inscribed below the shield -- a nod to the date that the state seal was created.

By the late 1910s or early 1920s, the next version of Georgia's flag appeared, which included the full version of the state seal in the blue field. According to the state Senate, this may have come from the 1914 change to the state seal modifying the official date shown on the seal from 1799 to 1776.

The fight over civil rights and the 1956 flag

In the 1950s, the southern United States was becoming a powderkeg, fueled by the battle over civil rights.

Desegregation in the nation's schools was one of the primary battlegrounds as the NAACP worked extensively in the courtrooms to open up public schools for black children.

Lawyers led by Thurgood Marshall finally won a unanimous decision in the US Supreme Court in the landmark 1954 Brown v. Board of Education decision which struck down the "separate but equal" doctrine relating to education.

Before leaving office in 1954, Gov. Herman Talmadge threatened to close the state's public schools as opposed to integrating them. Voters ratified an amendment to the state constitution which created grants for children attending private, segregated schools instead of public schools.

The state legislature passed a number of measures designed to put roadblocks in the way of the Brown v. Board of Education decision in Georgia.

Additional legislation designed to limit desegregation in all facets of public life was introduced in the General Assembly, up to and including the revocation of the charter of any city in the state that desegregated its public facilities.

Another measure that was passed by the legislature provided punishment for any law enforcement officer who failed to attempt to enforce any law "requiring segregation or separation of the white and colored races."

Although the "official reason" the flag was changed was to honor the upcoming centennial of the Confederacy and to honor the fallen soldiers, there was no mistaking that it was a thumb in the eye of those who would support desegregation.

Moving forward into the 21st Century

Political pressure increased on the state to change the state flag increased during the 1990s ahead of the 1996 Summer Olympic Games.

Credit: ASSOCIATED PRESS
Georgia Gov. Roy Barnes, right, and Cecil Alexander, left, the designer of the new Georgia state flag, pose with the banner in the governors office at the Capitol, Wednesday, Jan. 31, 2001. The flag replaced the Georgia state flag with the stars and bars of the Confederacy over the Capitol building on Wednesday morning. (AP Photo/Ric Feld)

By 2001, Gov. Roy Barnes responded, rushing a replacement flag through the General Assembly.

The 2001 flag included the state seal along with representations of earlier versions of the state flag below on a banner bearing the title "Georgia's History." Below the banner were the words "In God We Trust."

Derided by many for its design and how it was rushed into law, the flag cost Barnes another term in office, even according to his own account, as described by the Savannah Morning News.

Barnes' successor, Gov. Sonny Perdue, allowed voters to choose a new flag in a referendum. A new design, based, in part, on the first Confederate National flag -- known as the "Stars and Bars -- was chosen to become the state's current flag.

Elements of the old Confederate Battle Emblem continue to divide Georgians - from the Daughters of Confederate Veterans license plates officially distributed by the state Department of Motor Vehicles, to die-hard fans of the Confederacy who refuse to let go of the 1956-era flag and continue to fly it either in protest or in spite.

Confederate monument to be moved out of downtown Athens