With the help of his college roommate T.K. Peterson, at Georgetown University, the two began brainstorming ideas. Peterson was also struggling with finding spaces for social gatherings. 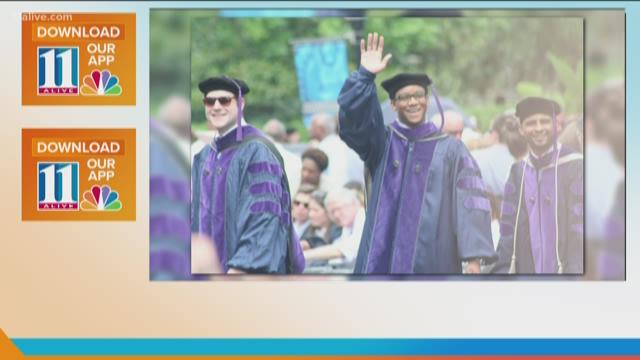 He's put a spin on the traditional social club experience by creating an exclusive think tank right here in Atlanta. Meet the man behind one of the most talked about social and working spaces, 27 year old Ryan Wilson. The concept behind The Gathering Spot didn’t come over night. Wilson says it came from being rejected time and time again.

“I was working for a lot of nonprofits in DC and the thing that I was running into was I never had access to workspace. Imagine being at a coffee shop or restaurant and you get the tap on your shoulder, ‘hey time to get up. I need this table back.” Wilson said that moment happened far too many times. “So I started coming up with a workspace model in my head that I thought could make sense for where I was.”

With the help of his college roommate, T.K. Peterson, at Georgetown University, the two began brainstorming ideas. Peterson was also struggling with finding spaces for social gatherings.

“He would come to my apartment in D.C. and we would work from 9pm to 1am in the morning. Every day our goal was to take a step in making the business a reality,” Wilson said.

They worked feverishly over a year. They were then at a point where the company was something more than what existed on paper.

Going off the paper, Wilson and Peterson visualized what they wanted the space to look like conceptually.

They then began an intense capital raise with a goal of $1 million. After a year, they surpassed their goal, hitting the $3 million mark. They were now ready to hire designers, builders and other partners to help them execute the business.

But how did they come up with the name?

“When we were in my apartment in DC, we could never come up with a name so we called the concept ‘the spot.’ And eventually it got to a point where we were like we need to call this something and ️I don't remember which one of us said gathering but we put gathering between the spot, which is the thing we had been calling it for a while, and here we are.” Wilson said that name is what stuck ever since.

TAKING A LOOK INSIDE THE CLUB.

“The line between professional you and social you is blurred nowadays so our goal, every day is to make sure people, to make sure that is celebrated and people feel comfortable,” Wilson said.

Though the concept began as a working space for entrepreneurs, it quickly turned into a one stop shop for businesses, artists and major corporations. The club has hosted galas, corporate luncheons for Google and Coca-Cola, weddings, panel discussions with Senator Booker, concerts for T.I. and so much more. Did we mention there is a unique experience day and night for members? The club has a restaurant and bar with a rotating menu. Members even get a complimentary breakfast.

The co-working space in the facility is on the far right side of the space. The space features long, open workstations, private offices, conference rooms all available to members 24 hours a day. So, depending on when you are there, you'll always see something different.

Wilson, who is no stranger to entrepreneurship, says he never would have imagined this being his brainchild.

“I grew up in a family of folks who were founding and growing businesses. I never thought that I was actually going to start anything of my own. I wanted to be an attorney.” Wilson went to law school, graduated and he says it was in the middle of that process that he started to come up with the initial idea The Gathering Spot.

“It's been humbling. I look at the last couple of weeks and we were honored to bring Congressman Lewis, we hosted a big concert with TI. Jack and Jill hosted a concert here. We will do something tonight with Chick-fil-A for the Peach Bowl so it's been humbling to be able to host events with some of the largest brands in the world but also individuals that we really admire and respect,” Wilson reflected.

The Gathering Spot opened March of 2016. The club is now home to more than 1,000 movers, shakers and disruptors in every single industry including the creative, film, music, TV community and so many more. Wilson says the club will be nationwide soon.

The club is taking in a few dozen more members at this time. Check them out at www.thegatheringspot.com .